Math, Mixology, and Marketing: Behind the Scenes at Bacardi Global Legacy

On May 3, 2015, Lyon's Frank Dedieu was crowned the winner of the Bacardi Global Legacy cocktail competition with his drink Le Latin. However, he didn't win on the taste and presentation of his cocktail alone: Thirty percent of the total score in the competition was determined by how well the drink was marketed in advance. 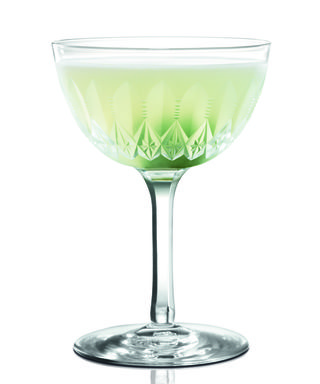 The point of Bacardi Legacy is to create a new classic cocktail with Bacardi rum; a drink that can stand the test of time and be made almost anywhere in the world like the Daiquiri or Cuba Libre.

It's a challenge, of course, to create a drink with existing ingredients that hasn't already been created a million times before. The winning drink in this contest is made with Bacardi Carta Blanca, white wine, lemon juice, olive brine, and sugar. (The Cocktail Lovers note that it has been nicknamed the "Dirty Daiquiri". Get the recipe at that link as well.)

But the drink couldn't have won on the recipe's merits. The bartenders were judged on how many drinks they served at their own bars, how many menu placements and guest bartending shifts they did, and how much social/traditional media attention their cocktail garnered.

Basically, they had to show proof of concept that their drink could spread far and wide.  Marketing of the drink by bartenders was an essential component in this competition, and also the one component that really sets it apart from other global cocktail/bartending comps.

These criteria were judged by a 3-person panel that included Caroline Hipperson, Bacardi's Global Brand Director, and Enrique Comas, Bacardi Rum's Global Brand Manager. The sessions weren't open for viewing but I Camper Englished the situation and sat in on four of the bartenders' presentations- as well as the private discussions between the judges after each one.

I was excited to see this judging because Math! but it wasn't as straightforward as (Number of cocktails served) x (1.3) / (population of your country) or anything that objective.

Each bartender had to present to the panel the budget and number of bottles they were given by Bacardi (if any) to promote their cocktail, and also the legal/logistical constraints of alcohol promotion in their given country.

Some competitors could be given cash but not alcohol, while others were in the reverse situation. Others could accept trips to promote their cocktails (airfare/hotel rooms) but never cash directly from the brand. Some countries do not allow alcohol advertising, while others are wide open. Some countries block Facebook entirely. Some bartenders simply live in smaller markets with few craft cocktails bars in which to promote their drinks, while others live in markets with only huge hotel bars so a simple guest bartending shift or temporary cocktail listing would involve months of planning with each property's marketing director.

So the judges couldn't simply add up the number of cocktails or press clips and come up with a score; they had to weigh those numbers in light of the budget and constraints of every bartender's home country.

Here is a picture of the judging sheet for one competitor: 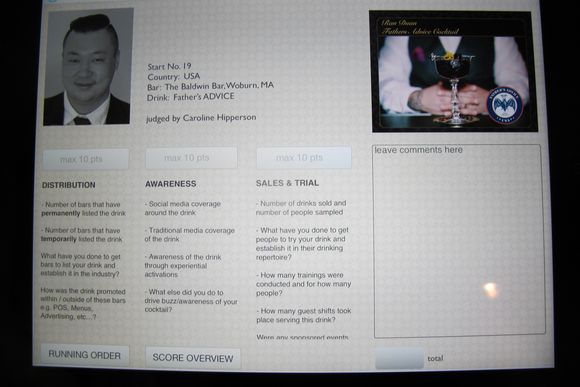 As you can see, they had to address three categories: Distribution (how far the drink went out in the world), Awareness (press and social media coverage), and Sales & Trial (drinks sold by you and others).

I didn't see any of the actual numbers given by the judges to any of the competitors I watched, but I heard the discussions. They were as you'd expect: That was a lot of drinks sold, but not much social media presence. He did well given the tiny market. I think he could have placed the drink on more menus, especially when he lives in X city.

It was pretty fascinating to be a fly on the wall for these sessions, given that I pay close attention to bartenders on social/traditional media in general.

Did Marketing Make the Winner?

I did not see the eventual winner Frank Dedieu's marketing presentation and don't know what he did to promote the drink. But I was curious in general about how much the scores from marketing affected the overall scores.

I emailed Caroline Hipperson to ask, "Did the people who performed well in the drink presentation typically also perform well in the marketing presentation, or did you see your scoring create a lot of movement into and out of the top eight competitors?"

Hipperson said she couldn't reveal much, but "Without the marketing scores added to the drink scores the top 8 would look different for sure."