Home Books Blog Clear Ice Talks Hire Me About Search Contact
Bourbon Doesn't Need to be Aged in American Oak Barrels, or in Barrels at All
Creative Cocktail Menus From Around the World

The Cocktail Bars of Sydney, Australia

I visited Sydney, Australia for the first time in May 2015 with the Bacardi Legacy Global Cocktail Competition and had time to hit most, but not all, of the good cocktail bars I'd heard about.

Below is a very brief write-up on bars I visited.

I walked into this bar thinking it was Baxter Inn at first, but it just shares the same alley. This bar sort of looks like a British pub meets a speakeasy, and highlights a heavy gin and genever selection (including some vintage gins available for drinking), and selection of cocktails calling for those spirits. There are 20 cocktails on the drink menu, which turns out to be more than usual for Sydney. I had just one cocktail here and it was well-made.

With an annoying low-information website, it would hard to know that Baxter Inn is one of Australia's most famous bars if you hadn't seen it as a regular member of the World's 50 Best Bars list, this year coming in at number seven. There are a mere six cocktails on the menu at this crowded speakeasy-style bar (playing a honky tonk soundtrack on my visit), but they make up for that with hundreds and hundreds of bottles of whisky; most of it scotch. I visited around happy hour time and the crowd was a lot of financial district types having #PowerFun after work. I could tell right off that the bartenders were excellent, even if most of the time they were pouring beers and whisky with fresh apple juice chasers. (Aside: It seems every cocktail bar in Sydney has a juicer behind the bar and it is the local custom to drink juiced-to-order green apple juice as a chaser and sometimes as a mixer with whisky and in cocktails.) I get the impression that this bar handles volume very well - I think there were six bartenders working on Wednesday at 6PM.

With its brightly colored blue-and-white walls, this Caribbean-themed bar reminds me quite a bit of New York's Cienfuegos in design, but instead of bowls of punch here they serve tiki drinks. The first one I ordered, not knowing it was a house specialty, was the Toasted Almond Mai Tai. It comes garnished with blowtorched marshmallows. Overall I wouldn't place the cocktails in my top favorites in town, but I loved the decor and party atmosphere here and was happy to return with a group on my second visit.

Tiki nerds will know that this bar is named for the venue that became the first Trader Vic's in Oakland, California. So it was funny that I flew 6000 or so miles to visit a bar named for one 10 miles from me in San Francisco. The bar features a 1950s decor, sort of like a 50s diner meets a 50s kitchen with its black and white checkerboard floors and pale green furniture. I was with a big group with Bacardi so I can't say how the drinks are normally, but I really liked the look and feel of the place.

There are now two Eau De Vie locations, one in Sydney and the other in Melbourne. The Sydney outpost is number 31 on the World's 50 Best Bars list. This bar was renowned for molecular mixology but again I didn't have the opportunity to try those drinks. The main bar room is dark and masculine, with several different types of seating at low couches or higher shared tables. I was expecting it to look sciency but it was more classic in style.

Upstairs is a pizza restaurant, downstairs is trouble: You can tell this is the bar that you always end up in late night (most bars close ridiculously early thanks to Sydney's arcane liquor laws, but this one goes later than most) and have too much fun in. It has a Sailor Jerry-type tropical rum pin-up theme and a small bar in the center packed with bartenders serving drinks at the fastest possible speed. 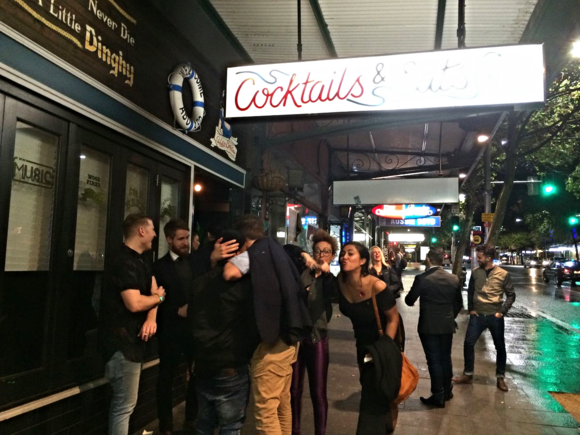 Down the steps from the street is a vinyl record store, and behind that is this low-ceilinged bar. The bar carries the record store theme with 45s decorating the ceiling, walls lined with promo posters for albums, a DJ spinning vintage rock and funk on vinyl in the corner, and a Rolling Stones pinball game by the entrance. There are just six drinks on the menu, three of them classics and three of them modern tropical style. 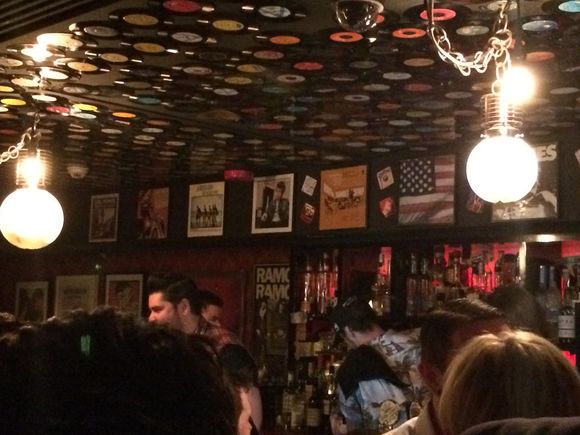 With its wall of vintage sewing machines on the top level, I lowered my expectations for the bar but was pleasantly surprised to find it serving some of the most interesting cocktails I had in Sydney. The bar offers several barrel aged cocktails and a solera-style stack of barrels of various finishes aging a blend of whiskies. The cocktail menu is long for Sydney and the bar uses other touches like wooden popsicle sticks as stir sticks, nice ice balls, and some creative drinks. We tried one with melon oleo saccharum, another with a lager reduction, and one avocado-washed Ardbeg scotch named Heaven Is In the Backseat of my Sazerac. 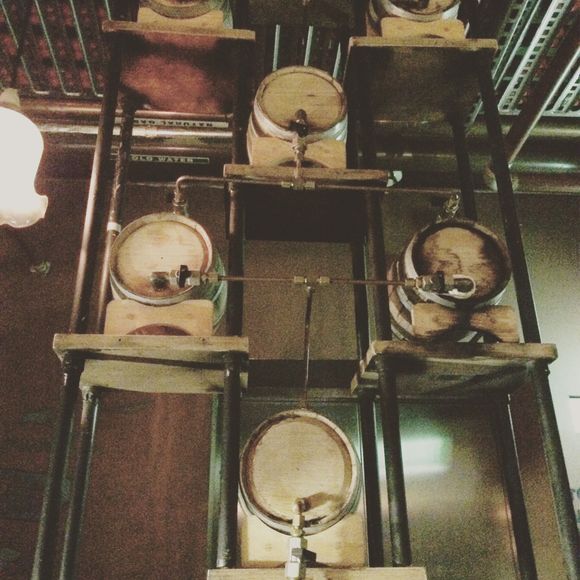 This bar was opened by Diageo World Class winner Tim Phillips and is number 19 on the World's 50 Best Bars list. The bar is seated-only, with drinkers lining up downstairs to get into the tiny dark room with its rickety wooden tables upstairs. The focus is on seasonality, with only fresh ingredient drinks. The menu changes daily and is written on a piece of butcher paper behind the bar, rather than their being menus. (Reportedly when limes aren't in season, they don't serve lime in any drinks.) The cocktails we tried there (we tried all five cocktails from the menu) were quite tart (even for cocktail nerds) and pretty creative.

Located a short walk from the famous Bondi Beach, Neighbourhood is a mellow casual restaurant bar (at least when we were there) open all day long. The cocktails we tried were delicious and tropical, and include a Caramel Corn Old Fashioned and a $25 Zombie.

Recommended Bars I Didn't Get to Visit

In conclusion, Sydney is one hell of a great drinking and bar-hopping city. When can we go back?