This spring I had the unique pleasure of visiting the Kavalan single-malt whisky distillery in Yilan, Taiwan.

This is a long post, so get comfy if you want to read, or just scroll through the pictures.

The week previous to my visit, their Vinho Barrique Solist whisky won the World's Best Single Malt Whisky award from the Beverage Tasting Institute, so everyone was in a really good mood. I think we were the first American journalists invited to visit, so that was double awesome.

The young distillery already receives 1 million visitors per year, 30% of them foreign. It's free to visit and to get a whisky sample at the distillery, which also has a gift shop and a huge cafe. 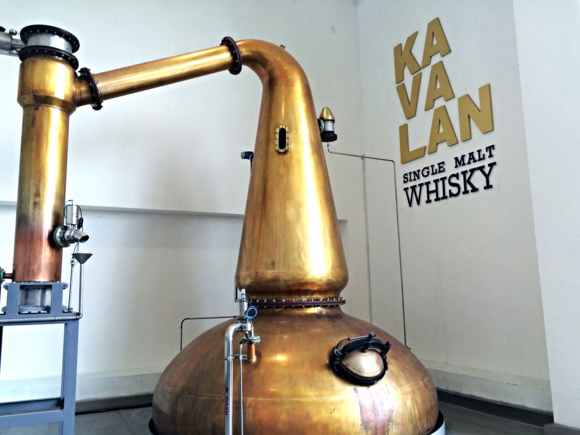 Kavalan is located in the county of Yilan, not far from Taipei, and the name Kavalan is the name of the indigenous people of the region.

Kavalan whisky is just one small part of the multi-billion dollar King Car company. (King means "gold", so it's supposed to represent a golden car rolling in to the future.) This company and Kavalan whisky was founded by Mr. Lee Tien-Tsai, whose 50-year old son we met for an epic banquet later in the trip. The company has many different divisions including, in part, consumer products (Mr. Brown Coffee, cans, cleaners and insecticides, instant noodles), health supplements and biotech research, food safety analysis, horticultural research, and more. 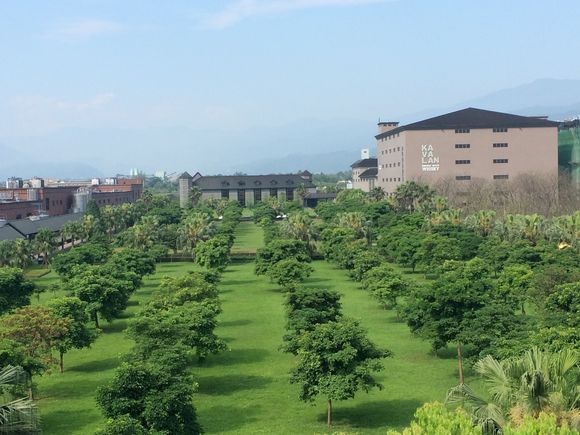 The factory where Kavalan is located also produces bottled water (from the local mountains), yogurt, and tea beverages. There is also a small conference center on-site. The factory was established in 1995. Then the rather large distillery was built in 2005 - all in 9 months.  The first drop of new make spirit was made on March 11, 2006 at 3:30 PM.

Kavalan is so far the only whisky made in Taiwan, though another company has recently announced plans to begin.

The water comes from the nearby mountains, naturally filtered through the earth and comes out as spring water. Swan said the water is clean and pure and there is plenty of it. It has a nearly neutral pH, and 17-20 ppm Calcium, which is a little higher than in Scotland according to Chang, but overall it’s soft water.

As covered a bit in my Water Project here on Alcademics, Chang notes that calcium, zinc, and magnesium quantities in the water are important for fermentation. (The yeast needs these minerals.) 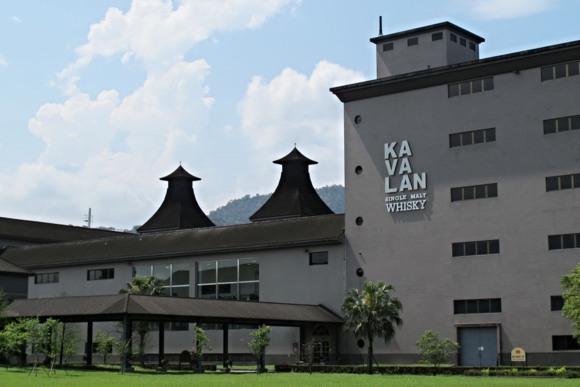 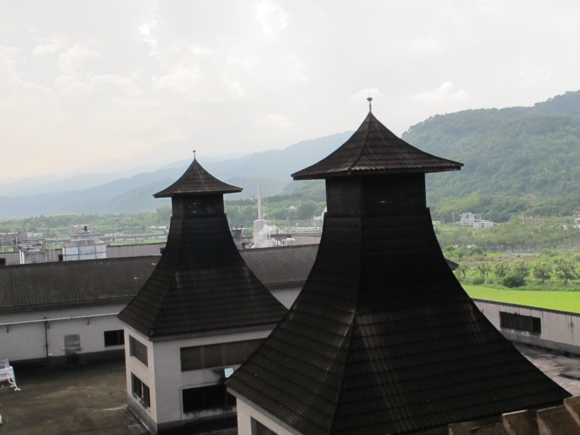 The mountains not far from the distillery provide the water used for Kavalan.

They use untreated water for fermentation, and then reverse osmosis-filtered water for barrel proofing and bottle proofing, starting with same water source. (Many other distilleries like those in Kentucky use municipal water for the watering to bottle strength from barrel strength.)

The 2-row malted barley comes from Scotland. When it arrives it is ground in a malt mill, then mashed and fermented just like scotch whisky. 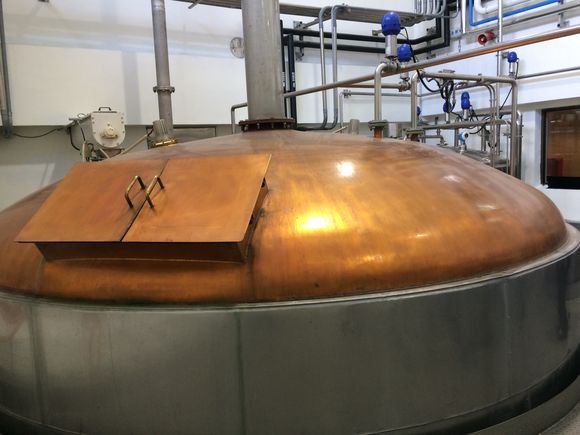 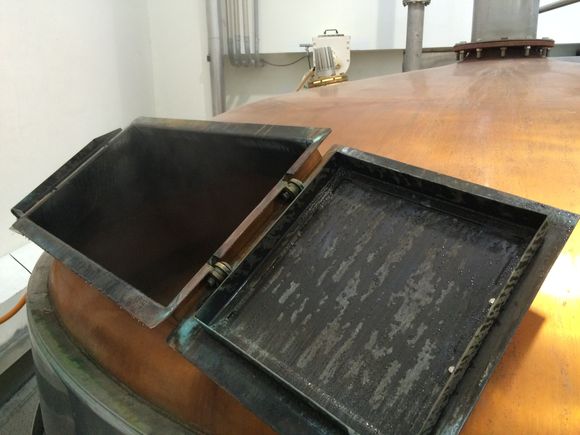 Washing is when hot water is poured on top of the ground-up barley to rinse out the fermentable sugars and leave behind the husks (which would burn against the side of the still). The barley is washed three times in the mash tun.

The copper mash tun was made in Scotland. It takes a 4 ton mash 8 hours each. There are three washes: 65 Celsius for the first, 85C for the second, and 90C for the third wash. The water from the third wash goes into the first wash of the next batch rather than into the next barley wash. This is the same process and more or less the same temperatures used in Scotland, according to Chang. 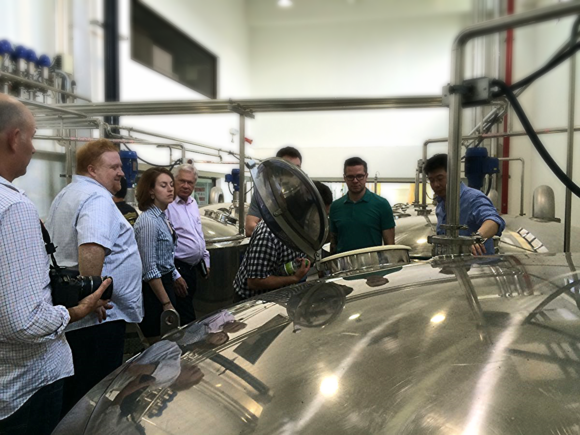 Fermentation is a bit different at Kavalan. They use two strains of yeast, both "dry-pitched" (added dry rather than wet). One is a "core fermenter" that produces lots of alcohol from the grains. This ferments for about 10 hours.

The second yeast they called a "fruit producer," meaning the fermentation with this yeast brings out a lot of fruit notes to the fermented barley. They let this ferment for about 20 hours, after which most of the yeast die.

The yeast then undergoes mostly lactic fermentation for an additional 30 hours, so that it's 60 hours total. "We need that long to get the fruit," said Swan.

Fermentation here is temperature controlled for a slow gradient of heat rise. It begins at 18C and ends at 34C. The beer is between 8-8.5% ABV after fermentation, which is slightly high compared to Scotland.

Initially they were using hybrid stills - discontinuous stills with pot stills on the bottom and a short column on top. These are no longer used for whisky production. 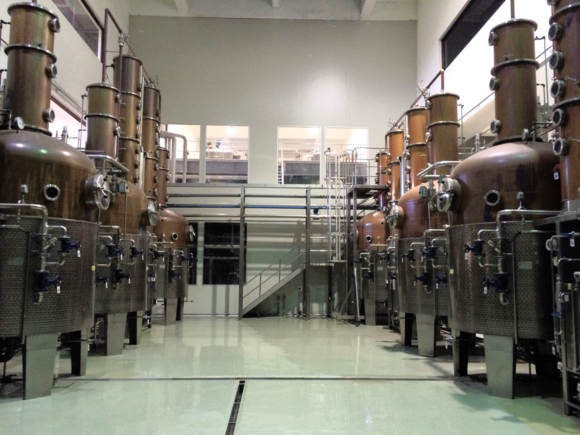 Stills no longer used for whisky at Kavalan.

In 2006 they brought in 2 pot stills (a set of wash and spirit stills), and then 2 more stills in 2008. They have three more pair of stills coming. 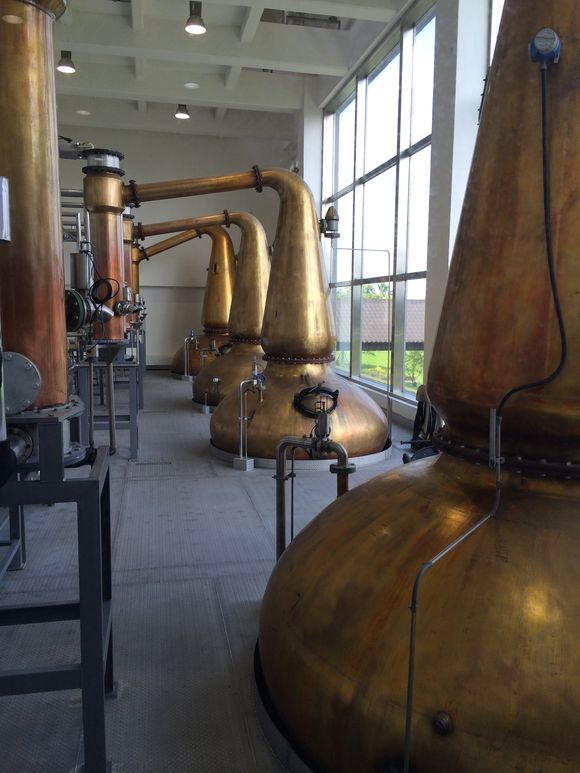 Today they produce 9 million bottles of Kavalan per year. Wow.

Chang told me that since they know with the hot climate their whisky will not age long in barrels, they have to make adjustments to the heads/tails cuts over what one might do in Scotland. They make a tighter cut overall (less heads and tails), do keep in a little bit more of the heads than is typical, and less tails.

They use less tails because they know they won’t be aging it for very long, and tails take longer to purify as they interact with the wood in a barrel.

As it typical they recycle feints and foreshots into the next batch's second distillation.

Their pot ales (stuff at the bottom of the still that's not alcohol) are treated to neutrality then released into water system.

The spent grains from the barley mostly go to pig farmers as they don’t have a lot of cattle on Taiwan.

The spirit comes off the still around 65% ABV and is diluted to 59.5 – 59.9 %  before going into the barrel. (This is the flash point for whisky, according to Chang.) Swan says that this makes no flavor difference to the whiskey as opposed to the standard 63% barrel fill proof in Scotland.

Because of demand they run their stills then 24/7/365. As mentioned, more are on the way. 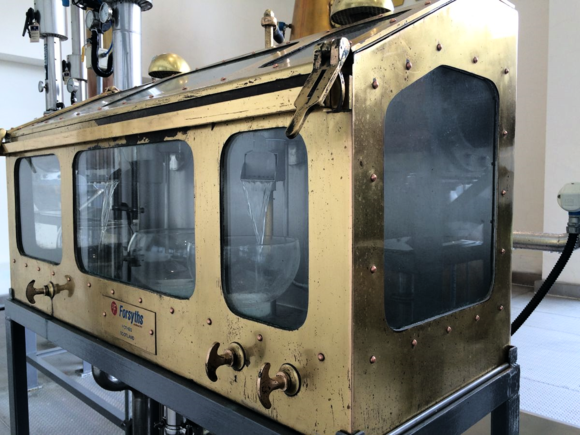 Aging in a Hot Climate

Between October and March they have cold winds coming from Siberia that bring precipitation and humidity along with the breeze. In fact, the average temperature ranges from 58F (14.4C) in January to 83F (28.4C) in July.  So it's not like the region is always the same temperature.  However the humidity is always high: 89-94% humidity all year round.

Chang says that the sub-tropical climate of the reason accelerates maturation but it's bad for the angel's share - lots of evaporation. It was either Chang or Swan who said, "Subtropical heat is like sandpaper – it sands away all the rough edges into a soft and round crystal ball of whisky.”

After a particularly hot summer they noticed their angel's share was as high as 18%, but normally it’s 10-12%.

They age all their whisky in American oak, which Swan says is better in hot weather because it has less tannins than European oak.

The barrels are stored in a 5-storey warehouse. All the barrels are palletized (stand on their ends rather than their sides) except the large puncheons on the top floor.

On the 5th floor it gets up to 42 degrees Celsius, while on the ground floor it’s 27 degrees at the same time.

I believe they are using one of two warehouses onsite currently, each has the capacity to hold 60,000 casks.

They do not rotate casks, but they put different sizes of casks on different floors. On the top floor are stored sherry butts (500L) and port pipes (600L). The bigger the cask, the slower the maturation, they say. The first through fourth floors hold mostly the ex-bourbon casks. 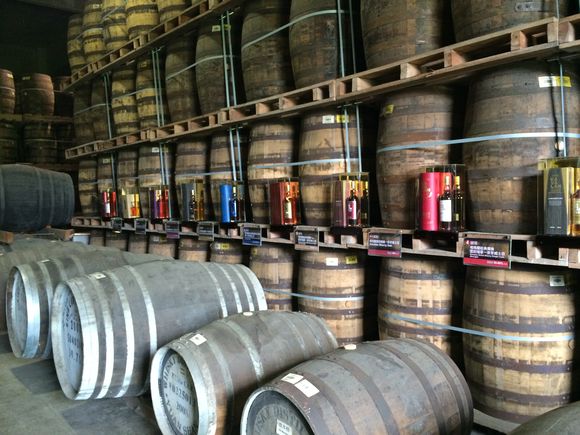 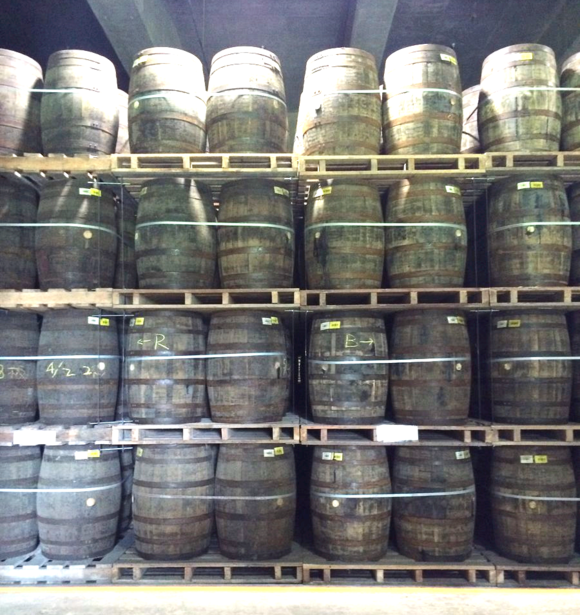 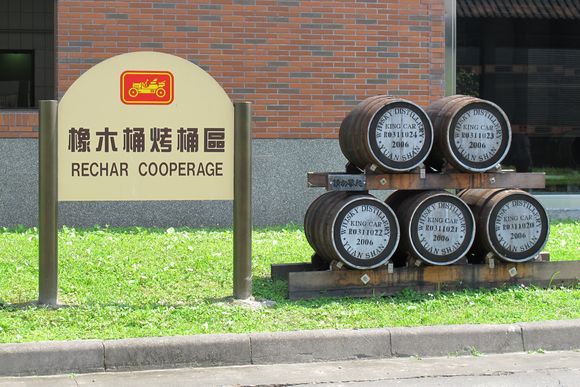 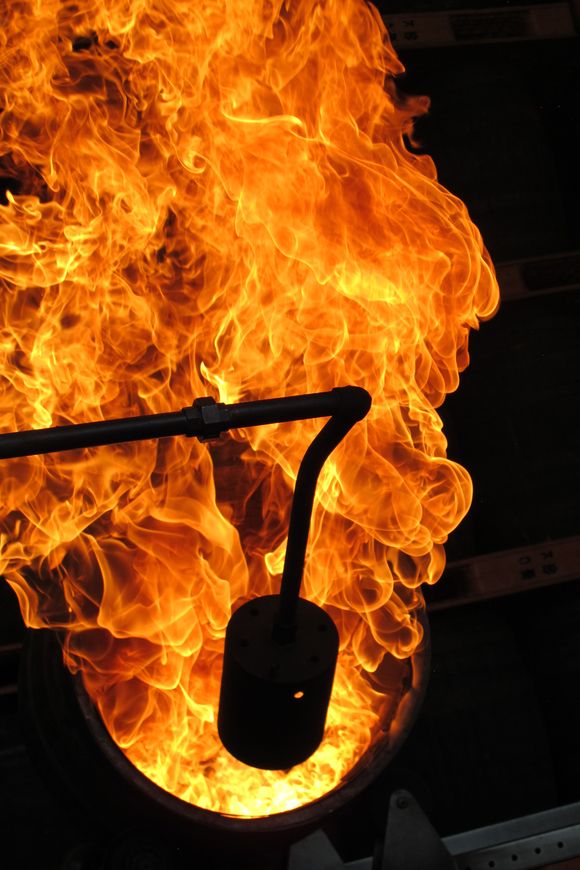 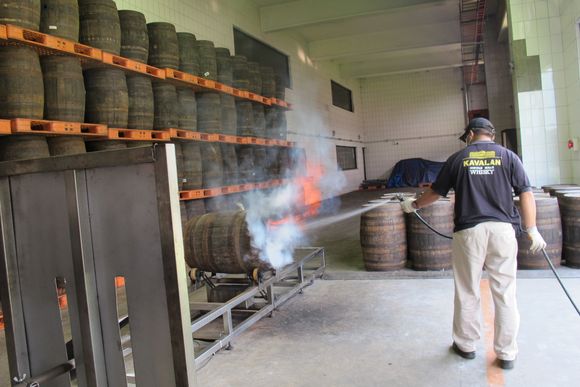 Because this post is already 2 billion words long, I'll save until tomorrow a post about how all these processes come together to make the bottles of Kavalan you see on the shelf. 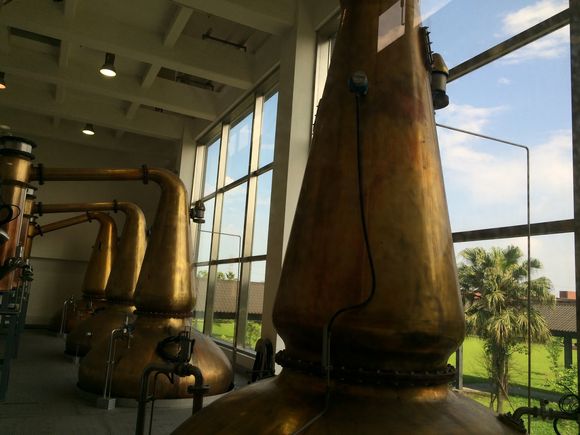 Did the Kavalan/Mr. Brown tour yesterday on our way down from very interesting Sheng Yang farm/restaurant in the same area. Wished we had read this article before going there to better appreciate what we were seeing. It was nevertheless awesome to have visited all these sites as tourists from Orange County, Cali.

Great read, we are going there in February and this has helped us out a lot, thank you. I do have one question. You mentioned there is another company thinking about making a distillery, would you happen to know what company that is and where they are thinking of setting up. Thanks.

Hi and Thanks - I looked through my notes and didn't write it down, but I seem to recall it was a large beer brewery (of a very popular beer), perhaps a government-owned one.