Below are 4 new scotch whisky releases and 7 American whiskies of all sorts. 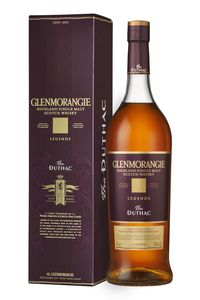 A king’s historic pilgrimage to the hometown of Glenmorangie is the inspiration for the Distillery’s latest expression.  Glenmorangie Duthac, the first release in the Legends Collection, draws on King James IV’s annual pilgrimage to Saint Duthac’s shrine in Tain, home to the Glenmorangie Distillery since 1843.  The bottling is available now in travel retail outlets in around the world.

Glenmorangie’s Legends Collection celebrates stories from the lands that have been home to Glenmorangie since 1843.  This first in the collection, Glenmorangie Duthac, was inspired by King James IV’s yearly pilgrimage to the saint’s shrine in Tain where the King often sought peace ahead of foreboding times. St Duthac’s shrine held a particular importance for the King of Scots, who felt such a personal connection with the saint that he made a six-week round trip to Tain each year for up to 20 years.  The final leg of James IV’s journey to St Duthac’s shrine, through the Highlands and across the Cromarty Firth, became so renowned, it is still known as The King’s Route.

The whisky was part-finished in casks which contained Pedro Ximénez, and in charred virgin oak. Glenmorangie Duthac is chill filtered and bottled at 43% ABV. It is available from travel retail stories globally, RRP of €75.00 (1 litre bottle).

Jefferson’s Bourbon introduces the newest blend to its portfolio: Jefferson’s Reserve Groth Cask Finish. This blend, debuting in May 2015, features Jefferson’s Reserve bourbon that was aged and fully matured in Kentucky prior to being finished in French oak barrels that once aged wine from Napa Valley’s Groth Vineyards & Winery.

In a twin wood aging process, Jefferson's Reserve bourbon was aged in new charred white oak barrels and was, then, further matured for nine months in recently dumped French Oak casks kept in “hot boxes” that once held Cabernet Sauvignon from Groth.

Jefferson’s Reserve Groth Cask Finish (ABV: 45.1%) will be available in May 2015 at select venues and retail locations both in-store and online nationwide. It will retail at $79.99.

Ledaig Dùsgadh 42 year old, 1972 vintage, is the rarest, oldest and most expensive Ledaig Single Malt Scotch Whisky ever released. Dùsgadh - meaning ‘awakening’ in Gaelic, celebrates the release of the first Ledaig spirit distilled in 1972.  The liquid was distilled using peated barley and aged in a variety of hogshead and butts in the warehouse on the Isle of Mull in 1972. In 1989, the casks were moved to the mainland to mature. In 2001, these came under the care of Master Distiller Ian MacMillan, who decided to fill this liquid into Gonzales Byass Oloroso sherry casks. After five years, the liquid was transferred back to Tobermory Distillery.

This 18 Year Old Ledaig represents the rebirth of  a malt whisky style that would have originally been produced at the distillery – the peated, Hebridean style single malt Scotch whisky. Inspired by this traditional style, in 1996, Master Blender and Master Distiller, Ian MacMillan, started distilling Ledaig for the first time since the Tobermory (formally Ledaig) distillery re-opened after its final quiet period in 1990. The peat-dried malted barley is married with water drawn from Tobermory Distillery’s private water source on the Isle of Mull and the liquid is then matured in oak wood casks and finished in Spanish sherry wood casks.

Barton 1792 Distillery will soon debut the first ever new 1792 whiskey expression, entitled 1792 Sweet Wheat.  Distilled back in 2007, the recipe features wheat as the secondary grain, rather than traditional rye.

1792 Sweet Wheat was bottled at 91.2 proof. Bottles are expected to hit stores this summer at the suggested retail price of $32.99.  Furthermore, the Distillery plans to release more new expressions of 1792 over the next few years.

Booker's Bourbon releases the third batch in its 2015 collection, Batch 2015-03, which features a custom label celebrating founding distiller Booker Noe's favorite part of the rackhouse and choice cut of meat -- "The Center Cut." Booker liked to age his namesake barrels in the center of the rackhouse -- the 5th floor.
Batch 2015-03, named the "The Center Cut," is the first batch in the 2015 limited-edition collection that Fred Noe, Beam's 7th Generation Master Distiller, selected with the help of the Booker's Bourbon Roundtable of top whiskey experts, enthusiasts and writers. For the first time ever, the Roundtable was also joined by local Louisville, Kentucky chef, Coby Ming, who used her culinary expertise to help select a batch ideal for food pairing.
In addition to Fred Noe and chef Coby Ming, the Roundtable panelists who helped select Batch 2015-03, "The Center Cut," included Chuck Cowdery, Geoff Kleinman, John McCarthy, Jack Robertiello, and Tony Sachs.
The panelists and guest chef selected Booker's® "The Center Cut" with the following characteristics: Proof: 127. Age: 7 years, 2 months and 28 days. Booker's Bourbon will be available nationwide beginning this month with a suggested retail price of $54.99 per 750 mL bottle.

The new Virgil Kaine Robber Baron Rye Whiskey is a mix of two whiskeys, a high 94% rye mash with a splash of Virgil Kaine High-Rye Bourbon.

The new Virgil Kaine High-Rye Bourbon was distilled from a mash of 60% corn, 36% rye and 4% barley; aged for no longer than two years and never chill-filtered.

Virgil Kaine Lowcountry Whiskey Co is a line of spirits founded and produced in Charleston, S.C. Virgil Kaine spirits are available at many retailers in South Carolina, Georgia and New York, with online purchase available at virgilkaine.com. SRP for both new spirits is $25 - $35.

Crafted by Brown-Forman Master Distiller Chris Morris, this second expression of the Old Forester Whiskey Row Series was specially crafted to honor the U.S. Bottled-in-Bond Act of 1897. To be labeled as Bottled in Bond, whiskey must have been the product of one distillation season, one distiller and from one distillery. It must have been aged in a federally bonded warehouse for at least four years and bottled at full 100 proof.

With a suggested retail price of $49.99 for a 750 ml, Old Forester 1897 Bottled in Bond will roll out in 20 select markets around the country with a national release planned for September. 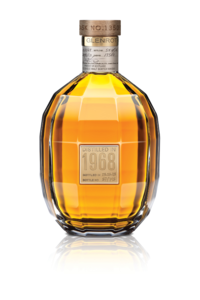 The Glenrothes Extraordinary Single Cask 1968 is a bottling from Cask #13507, a second-fill hogshead cask filled on November 19, 1968, that yielded just 145 bottles, 28 of which are available in the US.  This expression is unchill-filtered and, like all Glenrothes’ bottlings, completely natural in color. It is bottled at natural strength of 41.9%

Cherrywood Rye Whiskey, aged under 2 years in 15 gallon and 30 gallon barrels and bottled at 96 proof. Its a mash bill of 80% unmalted rye, 10% unmalted wheat, and 10% cherrywood smoked barley.