In yesterday's post, we took a long look at how Kavalan whisky is fermented, distilled, and aged in Taiwan.

Now we'll look at the barrel-finishing and bottling of the range of Kavalan whiskies. Most of them have their own stories to tell.

All Kavalan whiskies currently on the market are made from the same distillate. The differences between the bottlings is in barrel aging.

Kavalan Single Malt, 40% ABV. This is the best-seller locally and internationally, and also the least expensive. It is aged in ex-bourbon barrels exclusively, some of them recharred barrels. (See yesterday's post for rechar information.)

Kavalan King Car Conductor is the name of a higher-proof variation of the single-malt that is slightly more sherried in the blend. It is bottled at 46% ABV.

Kavalan Concertmaster is the name of the series of finished single-malt whiskies bottled at 40% ABV. So far I believe there is only one member of the series, the port.

The Kavlan Solist series is cask-strength products, in the US called Single Casks Expressions. They are always first-fill barrels (meaning the first time they've been refilled after being used for wine/bourbon.)

Kavalan Vinho Barrique Cask was created because they were having a hard time getting other casks they wanted.  The name is Vinho because initially they bought portuguese wine casks, but these days they use Napa valley wine casks as well. Also French, Australian wine casks.

These casks are thinly shaved (decharred) to get rid of some unwanted wine flavors sulfur and volatile acids – acetyl and butyric I believe but I could be wrong.

However, they do keep some wine flavors from the wine that is still in the staves, and you can sure taste the wine in the finished whisky.

They shave individual staves, then reassemble casks, then toast the casks, then rechar the barrels with a heavy alligator char via flamethrower. This process is called STR = Shave Toast Rechar.

Vinho is an average of 4-5 years old, but nothing older than 7 years in it. Not bad for something that won World's Best Whisky. 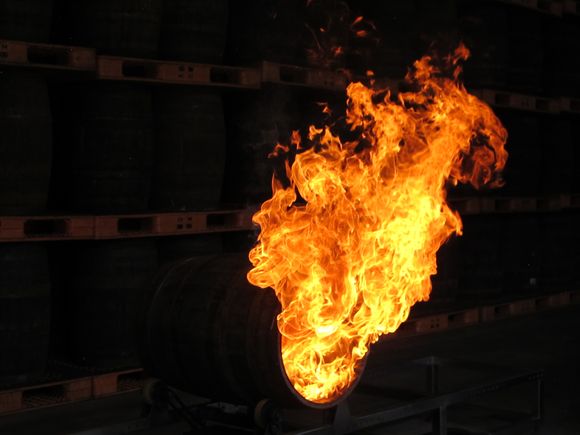 Kavalan Ex-Bourbon Cask is ready in just 1.5 years according to master blender Ian Chang, but they don't release it until it's four years old to comply with global labeling laws for whisky. (Some countries like the US require an age statement if it's aged less than four years.)

Chang calls this expression "The most characteristic single malt whisky of Kavalan,” and I'd agree. For this expression, as opposed to the other standard single-malt, they do not use any rechar barrels, only first fill ex-bourbon.

Kavalan Sherry Cask whisky is aged in 500L sherry barrels.  Their first batch was aged in ex-european oak, but now they're moving to American oak. (Fun fact: most sherry is aged in American oak despite rumors to the contrary.)

The barrels come off a real sherry solera after 20 years or so, then they are seasoned with 20 years old oloroso before Kavalan gets them.

(Many scotch whisky producers take new American oak barrels and season them with new wine for a few years so that it barely meets the legal aging definition of sherry, before being dumped and sent to Scotland. So it's not super common for the barrels to come off a real solera.)

Chang says the color of the whisky from the sherry comes though in just one month, but the whisky continues to age to between  6-7 years old.

Kavalan Fino Cask is aged in ex-fino sherry barrels. It consistently wins high marks in tastings and it seems to me that it is the house favorite -during the week of my visit we drank mostly this bottling, and it was the only thing we drank when we dined with Mr. Lee (the company owner).

Kavalan Distillery Reserve is only available at the distillery. It is a peated whisky, but it doesn't use peated malted barley: They just finish the whisky in barrels from Islay that held peated whisky.

That said, on the week of our visit they began distilling peated malt for future products we should get to try in a few years.

In the next post in this series, I'll do my best to summarize how Kavalan makes good whisky in a very unwhiskylike environment.

Camper,
Thank you for some enlightening posts about Kavalan Whisky. I hate to admit it but I still haven't got around to tasting any of these highly regarded and awarded Whiskies yet. Your posts have encouraged me to rectify this as soon as possible.
Kind regards, David.

Hello Camper, I’m a huge fan of Kavalan and your article inspired me a lot. May I ask one question about the barrels? As you mentioned “ The barrels come off a real sherry solera after 20 years or so, then they are seasoned with 20 years old oloroso before Kavalan gets them”, does that mean the barrels were firstly served in solera system for 20 years, and then, seasoned by 20 year-old oloroso? Looking forward to your reply, thanks!

@Mark - Yep, it could have been a solera for young sherry and then seasoned with older. Wouldn't the barrels wet from the solera have a hard time absorbing the 20 year sherry? I would think so, as barrels on the solera are supposed to be essentially neutral. Why not just season a new barrel rather than one from the solera? These are good questions (I imagine you asking). My guess is that by using neutral barrels re-seasoned with this sherry that the impact on Kavalan is really focussed on the sherry and minimizing wood impact. I'm glad you asked!