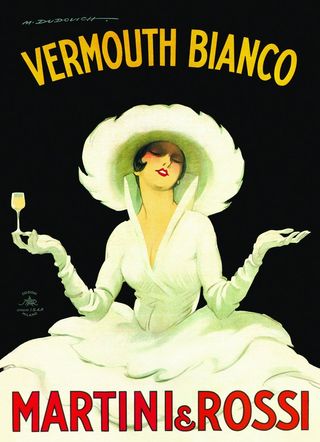 At this year's Golden State of Cocktails in Los Angeles, I attended a seminar by Giuseppe Gallo called "The Truth About Vermouth."

I knew a few things having visited both Martini and Noilly Prat in the past (follow those links to my distillery visit posts), but learned a lot more about the history and legal categorization of vermouth during this talk.

Below are my notes. You can see most of this information on Giuseppe Gallo's Slideshare page as well.

When I receive visitors from abroad here in Madrid, many are surprised to discover that red vermouth is the local "official drink" of sorts, considered "typical" of the city. Many brands of red vermouth here in the Spanish capital are served ON TAP (!!!) alongside the beer, and sometimes cider (northern Spain influence in that case). The most typical time to drink this "vermú de grifo" is as an "aperitivo" before lunch. Not sure how this vermouth tradition came about. I'll let you investigate :) ¡Salud from Spain!

It's always good to read about vermouth and see more knowledge being spread around.
A few comments, though:
a) Dry and Sweet can't be traced "to one place". Dry style wasn't invented by Dolin or anyone in Chambéry. It's really a French thing - even, in 1810. In fact, beyond sugar levels, the main difference between the original sweet Italian style and Dry French is that the first was made with wine + sugar, while the latter with wine + mistelle.
b) Artemisia is a genus that comprises hundreds of plants, many of them not wormwood. So the really interesting thing is that EU regulations *do not* force producers to use wormwood, contrarily to what's being claimed right, left and centre (I'm of course of the opinion that you *need* wormwood, but I don't make laws)
c) Americano is actually defined as gentian + wormwood (in this case, wormwood is indeed required by the EU)
Finally, Douglas' right about the Spanish tradition. Spaniards started producing vermouth 150 years ago and have never stopped. They have dozens of brands, and new ones are being launched monthly. It's all very exciting. Historically, vermouth would be stored in bars and bodegas in little barrels behind the bars and would be served from there. In the late 70's, when vermouth started losing ground to beer, some brands thought it necessary to modernize the whole thing and installed vermouth tap right next to the beer ones. They way it works is that vermouth is delivered as bag-in-box and the tap of the box is connected to the tap system. Not really sophisticated, but it odes the trick…
If Douglas is interested in Spanish vermouth history (or indeed vermouth history in general) and reads spanish, I will blow my horn and recommend he reads my book (http://www.edicionesb.com/catalogo/libro/el-gran-libro-del-vermut_3647.html) out in two weeks and available in all bookshops, physical or not.

Thanks for your thorough answer with lots of information I did not know about, François. Now I understand why I rarely seem to see the same brand twice. I'd also add that a very common way to drink vermouth here is mixed with soda water from a "sifón," when you want something a bit lighter.

Congratulations on a wonderful-looking book. I noticed that to see the link properly, one must remove the parenthesis at the end: http://www.edicionesb.com/catalogo/libro/el-gran-libro-del-vermut_3647.html Cheers.

Yes, "sifón" is very often de rigueur and works really well with Spanish vermouth, which tends to be less bitter and lighter than classic Italian vermouths. This service method is (or rather was) not exclusive to Spain as it was very common both in France and Italy - before both country seemingly forgot about drinking vermouth unmixed.
Thanks, Douglas, for your comments. See you, maybe, at the book presentation in Madrid. There's a FB page for the book, details will be announced there.

Yep, the vermouth thing in Madrid is excellent. Loved it.

That said, most vermouth taps around central Madrid seemed to be just a couple of brands. The actual number of brands floating around is much larger, but only a few seem to have invested in tap space that puts them 'in your face' - so to speak.