Stephen Shellenberger, writer of the Bostonapothecary blog, will be giving a 5-week class on Culinary Aestheticism this fall at the SMFA in Boston. You can find it in the fall course catalog.

I wish I could go, so you go instead.

Shellenberger sat down with himself to write this interview about the class. 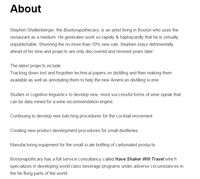 So how did the class come to be?

The woman who runs the program is a restaurant regular and also an abstract painter. In the past, we had talked about painters like Wassily Kandinsky & Hans Hoffman and my art world hero, Leonard Koren. She really liked my take on art in relation to culinary, so I was invited to give a workshop.

The course is called culinary aestheticism, I remember seeing posts on those topics at the Bostonapothecary blog over the years.

Yeah, aesthetics is the realm of sensation so I'll be introducing people to language to tease apart and talk about the aesthetic details of cocktails. Rather than borrow from the world of say, wine, I'll show that it fits really well to borrow from the world of painters. A lot of the language relates to how we perceive space and neuroscience is slowly revealing that we render flavor spatially in the mind.

But its a workshop right, so that's hands on?

sMFA is an art school, but the course is 21+ and I've got permission to make drinks. I'll be making them, people will be making them, and we will certainly engage in any sensations we are talking about, especially when we start comparing drinks to paintings. The hands on highlight is on the fourth class where we all construct and blend an abstract expressionistic amaro using blending stocks I've constructed. The amaro exercise is cool. I'll also show how we can construct our final amaro from a series of simplified sketches just like many painters make sketches before they ever put paint to canvas. 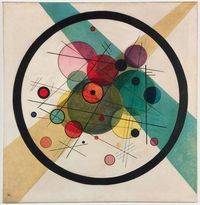 You're also covering some classics?

Yeah, I'll look at Daiquiris, Martinis, and Manhattans, holding them up in a new light. What would a painter like Kandisky, so deep into abstraction, see in a Daiquiri? Were the very first mixologists like Kandisky? They weren't saturated with influences like we are now. So that is what we're going to get into.

More and more beverage programs are starting to resemble fine art to me. Immediately I think of the Aviary, the Artesian, and 69 Colbrooke Row. Does the workshop relate to that notion?

Absolutely. The workshop gives a foundation, a sort of culinary theory or as I apply it, cocktail theory, which supports and encourages the work of those bars. It may also show that when when people are learning scholarly theory, its easier to do it with cocktail in hand than without. I'd like to think those bars you mentioned and other bar tenders with strong arts backgrounds like Matthew Bax would say Yes!Yes!Yes! to the course.

You're best known for exploring food science, but in the course description you mention "beverage artifacts will be seen as the new painting", say something about that?

I've often seen the science I've used as making paint. Back in the day if you wanted a new color bad enough, you needed to know chemistry and make your own paint. In regards to the modernist cocktail scene, people like to speak of our centrifuges and rotovaps, but those tools are really just about making our own paint to give you a beautiful aesthetic experience.

The official course description is below.

This is a hands-on course about aesthetics through the lens of the culinary arts, particularly beverage. We will build aesthetic strategies to describe what is often thought to be indescribable by entering the realm of non-linguistic thought. To begin, we will engagingly abstract up and down three iconic cocktails then we will taste our way through the major creative linkage strategies best exemplified in others. Ultimately we will explore a system of sketches to build an Italian style amaro then finish by applying aesthetic principles to decoding the most complex of all culinary artifacts, vermouth. The workshop will be peppered with the ideas of Hans Hoffman, Wassily Kandinsky, and Leonard Koren. Connections between modern culinary and great traditions like abstract expression will be revealed and the creation of food & beverage artifacts will be seen as the new painting.

I agree totally with what he said. IN my talk on the Pharmacology of Flavor I demonstrate how a salad plated to mimic a Kandinsky was rated as 30% tastier and customers were willing to pay 29% more for that designed salad than the same ingredients thrown into a bowl. Flavor is indeed perceived spatially and vibrationally in the brain, and when tied to an emotion, is stored in our DNA. It's an exciting world out there!