San Francisco bar Trick Dog's biannual cocktail menu drops July 8, 2015 at 3PM. This time the theme is "Trick Dogs" and it's in the form of a 2016 Doggie Calendar.

The first five menus were a Pantone Color Wheel, a record album of 45s, an Astrological Chart, a San Francisco Tourist Map, and most recently a Chinese Restaurant Menu.

I know you just want to see the pictures, but here are highlights:

The full menu and press release are below the images.

Click on the thumbnails to see all the images. 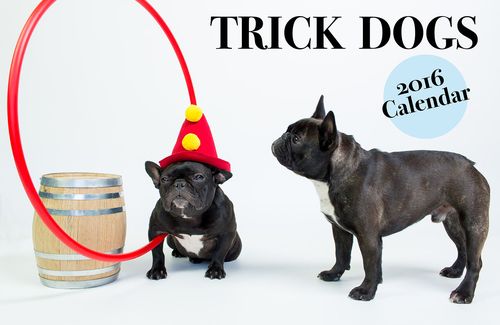 And here is the full info from the press release:

Trick Dog, the award-winning San Francisco bar from cocktail consulting team The Bon Vivants, officially launches the most recent version of its bi-annual menu revamp at 3:00pm PST, Wednesday, July 8. Twice each year, The Bon Vivants create an entirely new themed menu of specialty cocktails and concept at Trick Dog – the newest menu is the "Trick Dogs" - a 2016 calendar starring a dog and a cocktail for each month.
The Trick Dogs calendar menu features dog models (including personal pets of The Bon Vivants' Josh Harris and Morgan Schick, chef Thomas McNaughton, and calendar photographer Sonya Yu), with each month representing a signature drink and dog of the month. Keeping up the tradition of ensuring that each menu is a fully functional item in its own right – not "just" a menu – Trick Dog's menu/calendar mashup is a fully functional 2016 calendar, and is available for sale at the bar for $20 each. 100% of proceeds from calendar sales will be split between two local charities, Muttville Senior Dog Rescue (www.muttville.org) and Northern California Family Dog Rescue (www.norcalfamilydogrescue.org).
Each featured dog on the menu also has its own hashtag, – guests are encouraged to vote for Trick Dog's Best in Show by posting a photo of their experience at Trick Dog and using their favorite dog/cocktail's hashtag. At the end of the year, the dog whose hashtag received the most votes throughout the course of the menu run will be named Best in Show and will be celebrated with treats, scratches, and other yet-to-be-determined prizes.

Do you sell these and can we buy one? Thank you.

They sell them at the bar, I don't see them for sale online.