Cocktail Citratres: What, Why, and Where? 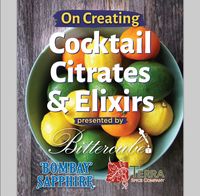 At the Tales of the Cocktail convention, I attended a seminar hosted by Ira Koplowitz and Nick Kosevich of Bittercube Bitters called On Creating Cocktail Citrates & Elixirs.

The seminar lead up to the point that if you want to make lasting kegged (and often carbonated) cocktails, you might need to use citrates.

One of the presenters smartly called kegged cocktails "the new punch," and interestingly, like vintage punch, citrates start with oleo saccharum then add some science.

Citrates are an approximation of sour mix: sugar and citrus combined, but in a form that is predictable, reproducible, and stable. They start with an oleo saccharum (citrus peels and sugar), then add other acids and mouthfeel agents.

This is important, they say, because citrus changes dramatically after being juiced/cut (BRIX level falls, pH rises, organic compounds change and degrade) especially after 24 hours. They also noted that for carbonated cocktails, citrates reduce nucleation points that interfere with good carbonation.

So the goal of a citrate is to replace or reduce citrus and syrup in a cocktail. They noted that citrates are not identical to sour mix - if you just match the BRIX and pH level, you won't get to where you need to be. And you can't just use citric acid either.

Citrates Are Composed Of:

Elixirs, by their definition, are compound flavor citrates plus water.

You can read more about them in this PDF document on the Bittercube website. It gives a good overview of the what and why of citrates and elixirs. It also includes recipes for several citrates, elixirs, and a kegged cocktail.

Many bars that use citrus in their kegged cocktails use a citrate by some form (and often by another name), so you might have unknowingly tried one already.

For more reading on the topic, check out Dave Arnold's book Liquid Intelligence.

you wrote "You can read more about them in this PDF document on the Bittercube website. ".

Unfortunately there is a dead link :((