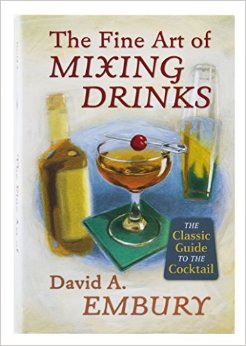 Recently I was speaking on a panel based around the era of David A. Embury's book The Fine Art of Mixing Drinks, first published in 1948.

He notes what coming out of an era of bad drinks into a good one is like:

Most of the present generation learned to drink and most of the present-day bartenders learned their profession during the past thirty-seven years. The first fourteen years of this period were devoted to the famous ‘experiment, noble in purpose,’ and the remaining years have not yet been sufficient to erase wholly the ignoble effects of that era.

During prohibition the overwhelming majority of available liquor consisted of bathtub gin and Scotch "just off the boat" (ferryboat from either Hoboken or Brooklyn).

So unutterably vile were these synthetic concoctions that the primary object in mixing a cocktail became the otherwise emollient and anti-emetic ingredients (cream, honey, Karo, canned fruit juices, etc.) to make it reasonably possible to swallow the resultant concoction and at the same time to retain a sufficient content of renatured alcohol to insure ultimate inebriety.

Just how much dilution of the "gin"-bottle content might be necessary to accomplish this supposedly salutary result depended largely on the intestinal fortitude and esophageal callosity of the particular individual involved.

During the talk, I mentioned how that was like drinking in 2001 or 2005 or so, when fresh ingredients were not the norm. That first fresh lime juice Margarita you had changed everything.

But also it's a lot like being a grown-up drinker as opposed to a college-aged one where you were trying to hide the taste of the liquor underneath brightly-colored sugary liqueurs.

We live in much better times now.

In spite of all the praise Embury's book gets these days, I still think it's sorely underrated. I think my favorite thing about it is his intuitive grouping of cocktails into aromatic and sour types. As it turns out, his intuition, based purely on his own experience, exactly nailed the two main historical lineages of modern mixed drinks -- the children of the original "old-fashioned" cocktail and the children of Punch -- lineages that hardly anybody (including Embury) knew existed prior to Wondrich's research over the last ten years.

So I guess if we use Embury's timeline as a guide, it'll be another 12 years or so before people learn to drink properly again? :D