Science on How Spirits Change or Age in the Bottle, Rather than the Barrel

At Tales of the Cocktail, I attended a seminar led by Ian McLaren and three scientists, all from Bacardi. It was called Genie in a Bottle: How Spirits Age.

Being part of a gargantuan spirits company they were able to call upon the science that had been done in the past and specifically for this seminar about how spirits change in the bottle. I think there is a general acceptance that in opened bottles stored for many years, spirits get a little bit flatter in flavor. In this seminar they took it way further than that.

The most important information is on this slide: 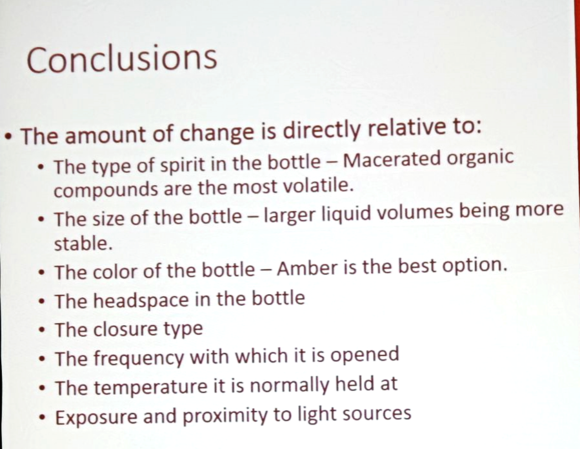 Here are a lot of notes:

That was just a fraction of what was shown at the seminar, but I hope it's helpful.

I cringe every time I see the back bar against the windows (in San Francisco I always think that when I see  Zuni Cafe, Absinthe, my local liquor store's wine selection, and the new Black Sands, but at least it doesn't usually get that hot in SF), but hopefully they move through product quickly so that the effects are not as dramatic.

McLaren showed a lot of slides of brightly-lit LED and fluorescent-lit back bars, with particularly bad ones being when the spirits sit on a light box as that adds heat as well.

So maybe all those candlelit, brick-walled speakeasy-style back bars aren't so bad after all.

This is great information! I've been wondering about this type of thing for some time. Thank you, Camper, for posting this. One follow-up: does the spirit's alcohol concentration play a role in the degree of oxidation over time? For example, will a 80-proof whiskey oxidize faster than one that is 100-proof or greater?

Hmm that's a really good question. Obviously wine/vermouth oxidize more quickly than spirits, but I'm not sure that would extend to 40 vs 50%ABV spirits. We can guess that higher proof spirits would lose alcohol at a faster rate when open and closed a lot as there is a higher concentration of the alcohol in the space in the bottle.

But beyond that I'm not sure. I'll see if Ian McLaren knows and can share with us.

Was there any information about temperature fluxuations causing faster oxidation. For instance, keeping vermouth out for service and then transferring them into the fridge over night. The constant back and forth from room temp to cold?

Another great question. No there wasn't a discussion of that, though they did mention if you have pour spouts on during the day then caps at night you're still having a lot of open bottle time.

It used to be thought that beer got 'skunked' by going from cold to hot and back but I think that was disproved and it's more of a light effect. But if Ian doesn't find time to comment on this post my advice would be to search for the answer in beer. It's a little different in that you have opened bottles and that wouldn't be the case for beer.

On the other hand Bacardi owns 2 major vermouth brands so maybe they know offhand....

Your point is an excellent one. Given a constant temperature, alcohol will evaporate from the liquor at a constant rate (assuming consistant opening of the enclosure), making it a matter of time that a the alcohol in a 40% AVB liquor would dissipate faster than a 50% liquor.

As a follow up on this discussion, I submit this for your consideration: http://chuckcowdery.blogspot.com/2015/09/can-whiskey-go-bad.html

I thought it might add to the conversation. I hope you find that to be true.

There is another variable that goes along with headspace in the bottle, and that is the width of the bottle. A bottle twice as wide will have roughly twice as much surface area for the air to interact with the surface of the liquor.

*edit: a bottle twice as wide will have roughly 4x as much surface area for the air inside the bottle to interact with the surface of the liquid.

Yep, I'd still call that 'headspace' but whatevs. The important point is not to keep your precious old whiskey in half-full mason jars :)

What about buying a never-opened, sealed 40-year old bottle of gin vs a new one off the shelf? The amount of air in a sealed bottle must be minimal.
Can such bottles offer any advantage over newly-bottles spirits, or can they only lose qualities over time in bottle? I take the point about time in barrel, but those will generally be recently-bottled. I'm talking about never-opened spirits from the 60s & 70s.
Any help welcome...

I've never heard of any advantages when it comes to gin. Ideally it's the same condition as when it was bottled - which is interesting enough!

Hello, Pink Pepper Gin make a very bold statement "intense flavours that will further evolve the longer it's in the bottle" I think it's an inaccurate statement but would appreciate your input please.

Not sure about this particular gin, but if there are post-distillation materials like peppercorns floating in the bottle then they'd further evolve/infuse/break down. Otherwise (if everything is distilled together) I'd be skeptical of the claim but willing to be shown otherwise.

While in the Navy 1992 era I purchased a bottle of Premium Black Bacardi rum. I bought it in San Juan or possibly Barbados. In my absence a house guest plus one opened the bottle and drank half. How mad should I be? Current answer is 26 years.

On the oxidation, over what amount of time were changes noticed? Will there be noticeable flavors in a week? Month? Or are we talking years?

I don't recall a specific timeline offhand, but I think it will depend on the proof and ingredients in the spirit/liqueur, with the lower proof/post-distillation botanicals being affected sooner. My gut tells me it could be in several months for some liqueurs like St. Germain but years when we're looking at straight spirits.

Can you age bourbon that has been bottled already if you pour it into a cask?

Yep - The only difference will be if the bourbon is a lower-proof in the bottle than it was in the cask it would probably be impacted at a slower rate (if it's a full-sized barrel). If it's barrel-strength then it should be the same. But beware of small barrels - things get woody before they get mature so it's best to taste often.

Some folks swear by mezcal being aged in glass. Is there anything to this practice?

I am aware that for tequila a resting period before bottling/in the bottle is considered a good thing, but I don't know the science of it or if it's simply oxidation.

Hello,
I am interested in knowing whether it's improper to package a cream liqueur like the Irish cream in a colourless glass bottle for a long time.

Does it affect its quality in the long run?

"Oxidation" is a very overused term as it relates to change in taste of a spirit. If what everyone means by oxidation is it's real definition: "reacts with oxygen" then you guys (like everyone that I meet) are probably completely wrong. Specifically for whiskies like a scotch, bourbon, or japanese whisky, etc... Oxidation really has nothing to do with it. (Not necessarily true for wine, vodka, gin, etc...)

Your scotch for example is not oxidizing when you expose it to air and no amount of oxygen getting into your bottle is causing your whisky to "open up" or even to "go bad".

Scotch and bourbon are distilled spirits. Distillation happens in air. A lot of oxidation would have occured therf. Next your whisk(e)y is loaded into charred/toasted casks. That is literally the most oxidized form of the wood. Any further oxidation that would happen to your spirit would have likely happened right there. On top of that your spirit then sits inside of that porous wooden cask with oxygen inside of it for years. You have definitely reached maximum oxidation by this point. By the time your very overpriced Macallan has reached the bottle, it is no longer going to be subject to any real oxidation. The esters, aldehydes, congeners, tannins, etc... are not going to be affected by oxygen anymore.

The issue isn't with oxygen getting into the bottle that changes your spirit, it's with alcohol escaping.

This article does a decent job of explaining that. As we know, ethanol is more volatile than water and it's hydrogen bonds are more subject to breakage. The more headspace that you have in your bottle, the more that the alcohol gas from the spirit can fill up that free space. Then as soon as you open it... Gone. This is why when you leave your whisky out in a glass overnight it gets cloudy and flat. The water concentration relative to the ethanol is much higher and the compounds which were previously soluble in the ethanol are now clumping together to make a sort of colloidal haze in your spirit.

The best way to prevent this is by loading your bottle with an inert gas to fill up the headspace or by using smaller vessels like decanters of different sizes relative to the volume of your liquid.

Hello
Regarding fruit liqueur. Fermentation for 2 months with neutral alcohol at 40 degrees with ripe and sweet bananas, no added sugar or syrup.
Bottling, screwed caps, after 6 months, the taste is perfect except in potency alcohol degrees, as if the alcohol had disappeared, although in the bottle, well preserved, the alcohol does not escape, normally .
This only happens with fruit liqueurs, but not with mint, homemade kahlua, dry ingredient and condiment.
What would be the reason for alcohol to spoil in this way?
Thank you in advance for any intervention

@eric shroetter - I'm sure I fully understand the situation but is it just a matter of the water/mass in the fruit diluting the overall alcohol in the bottle?