Liquor-Fortified, Barrel-Aged Maple Syrup for Cocktails and Food in Chicago

Two things I hadn't heard of before: barrel-aging maple syrup, and flavoring maple syrup with liquor.
At Chicago's The Palmer House, A Hilton Hotel, they're doing both of those things at the same time. Five-gallon barrels are filled with maple syrup and fortified with different liquors (Woodford Reserve Bourbon, Grand Marnier, Whistle Pig Rye Whiskey, Herradura Tequila, 16-year-old Single Malt Scotch whiskey and dark Haitian rum) and aged in the former rail passage that was used to bring in coal for the boilers. 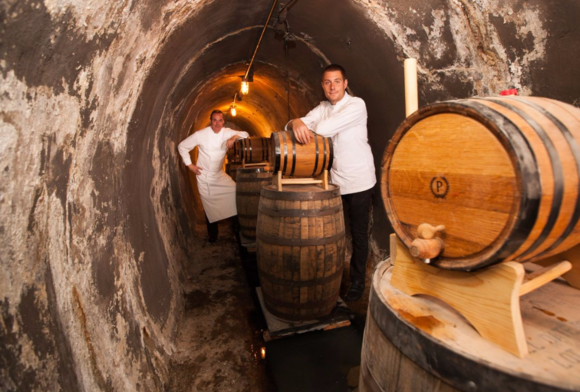 Images courtesy of The Palmer House, A Hilton Hotel

I was confused as to the specifics so I reached out for more information - were they barrel-aged cocktails with maple syrup added, or maple syrup with spirits added, and were the spirits added for flavor or to fortify the syrup to prevent it from fermenting in the barrel?

We add liquor to the barrels to impart more flavor. Typically our syrup will age between 4 and 6 months depending on what dish or cocktail we’ve decided to use it in. Additionally we add a liquor to the barrel to hinder any type fermentation that might happen, although the high sugar content of the syrup already inhibits bacteria or mold growth . Our tunnel feeds off the back end of the boiler room for the hotel and being a big hotel, we have big boilers and many of them that create lots of heat not traditionally desired for “cave ageing” items.

The heat isn’t necessary a bad thing, it’s no different than the wrack houses in Kentucky that are used to age bourbon & whiskey. The temperature fluctuations actually acts like a “lung”, slowly breathing in and out with the heat / expansion of the wood. This expansion is what allows the transfer of flavor in to the syrup or liquid that is in the barrel. In general, over time the most flavor will come with time. As the syrups sit, they begin to reduce and dissipate what little water is left intensify the flavor even more.

Most of our barrels are repurposed Woodford Reserve bourbon that we get from our bourbon program with them. We also use plain charred barrels to flavor syrups that would not typically pair well with bourbon (like Grand Marnier). In the upcoming months we will have Herradura tequila barrels and Koval barrels that we will get from our partnerships with those brands.

Currently they're using the syrup in the house Old Chicago Passage Maple Manhattan as well as some food items, but with all that syrup aging you can bet they'll have some more uses for it in the future. Images courtesy of The Palmer House, A Hilton Hotel

As a Maple Syrup Producer. This is all about publicity....and you bit the hook. #1 The Maple Syrup WILL mold. Just because it has a sugar content of 66 brix + doesn't mean it won't mold....It will in fact mold. It needs to be refrigerated to prevent molding. Molding isn't the end of the world, however how are they going to filter it? This is all a Promo-Hoax!

My understanding is that what's described here is probably violating the current (and recently expanded) ILCC laws on infusions and premixed alcoholic beverages.

Thanks for sharing those docs. I don't think these would count as infusions, as that is when a *spirit* is infused with flavoring. In this circumstance, the spirit is the flavoring infusing the syrup.

Here are a couple of commercial barrel-aged maple offerings that I've been able to find in Quebec: