Between the Heart and the Tails, the 'Seconds'

In pot-still distillation we always talk about the cuts: the heads and tails that are discarded (or recycled), and the hearts cut that become the spirit that ends up in the bottle.

But some distillers make another cut between the heart and the tails called the seconds. (Say it with a french pronunciation seh-kuhnndz rather than like seconds on a clock.)

At Privateer Rum in Massachusetts, they make a special rum called The Queen's Share that is a redistillation of just seconds. We'll get to that in a second. 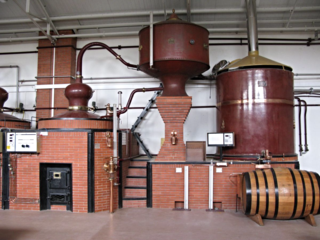 The first place I heard the term seconds was in Cognac, and frankly I don't know much about it. Luckily for us, Privateer Rum's head distiller Maggie Campbell was trained by Hubert Germain-Robin, a frenchman who has distilled fantastic cognac-style brandies in California since 1984. Campbell was able to fill me in on how this cut of the spirit is used in some cognacs.

To review the process: Cognac is distilled twice in pot stills. The first distillation is the wine distillation. The second one is called the brouillis or low-wines distillation. In cognac, since they only distill for a small part of the year after the grape harvest/fermentation period, they do not make a separate product out of the seconds, but they do often recycle them back into a their next batch of wine bound for distillation, or in the next batch's second distillation.

Note that in single-malt scotch whisky and in some other spirits production they also put the heads/tails back into the first or second distillation, just to get all of the usable alcohol out of it. So this isn't unique to cognac or the seconds. But different brands/categories decide where they "re-pitch" (put into the next distillation batch) the heads, tails, and sometimes seconds. These may be in different places.

Campbell says of seconds in cognac:

In Cognac each distiller has their recipe as to where they re-pitch each one and claim how it changes the flavor of the following distillates.

They say if it goes into the wine the ABV is significantly raised on the first installation causing the rest of the distillations to be higher in alcohol. Apparently when it goes in the wine there's less concentration of congeners and lighter flavor brandy is made. This is what Martel does.

If the heads and tails go into the brouillis (second distillation) then it makes it richer and deeper. This is what Hennessey does.

Note that doesn't account for the seconds and where they go. Next time I'm in cognac I'm going to research this further.

So at Privateer Rum, they do not re-pitch the heads and tails at all so that they don't affect the heart of the distillation or build up.

But the seconds are collected during each distillation and saved. From the explainer sheet:

As the hearts run off the still they become more powerful & flavorful approaching the tails cut. Even once these tails have overpowered the hearts and we’ve made our cut, some of these rich hearts are still intertwined with the bitter tails. At this stage we collect... the ‘seconds’.

These seconds (collected over many runs) are redistilled (a third distillation); the tails of this distillation are discarded; and this special batch of rum is then aged separately.

This is what made up the release of the first single barrel of Privateer's Queen's Share. It was aged 3 years and bottled.

If you've read this far, I've got bad news for you: There wasn't very much of it and it's probably long-since sold out.

Good read as always, Camper. But... I'm sure I can't be the only one wondering... how was the rum from the "seconds"?

I only had a quick sip while I was at the distillery (haven't written that up yet) before it was released so I don't have any real tasting notes to give except that it was very rich in flavor. With such a small batch (single-barrel), they mostly leave it to their fans to buy, much like their annual gin release.