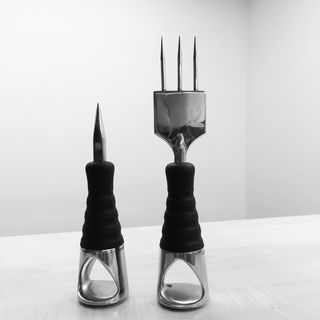 I've spent a fair amount of time cutting up ice, and have always been satisfied with the Yamachu Anvil Ice Pick and Deluxe Ice Pitchfork (even though that one is prone to rust).

But these new ice picks from Uber Bar Tools are so awesome they've become the tools that I use on an everyday basis (because cutting up blocks of ice by hand is an everyday thing, right?).

There are two styles. Both have a heavy solid metal base and both are modular so if you drop it on cement and bend the tines you can just replace the pick or fork part.

They have thumb holes (which I can only reach for the pick as the fork is longer) to give extra grip and force if you need it. The Lux Pick has a much meatier/thicker/stronger pick end than any other ice pick I've seen. It's not likely to bend at all no matter what you drop it on (but it would put a serious hole in your foot if you dropped it on that). 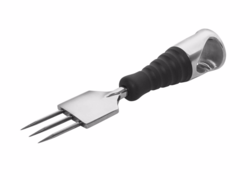 The Lux Fork has really long tines and it is far superior than the smaller/lighter pitchfork pick at cutting up larger blocks into straight-sided cubes than anything else I've tried. I use it to break up clear ice blocks made in my home cooler via directional freezing, and then further break those into nice big ice cubes in my hand. I use the fork even more than the pick.

So that's my take.

For all of the ice experiments, clear ice techniques, and other ice miscellany here on Alcademics, check out the ice index.