What is Directional Freezing?

Directional Freezing is a simple method to make crystal clear ice by controlling the direction that water freezes. It was first explained here on Alcademics.com by Camper English (me) in December 2009 after months of experiments.  The method has been written about in books, used in commercial products, and is employed in many small cocktail bars around the world. 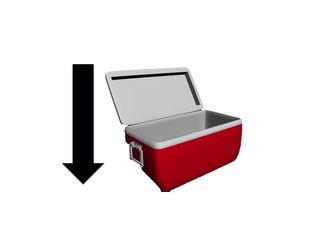 The simplest (and original) way to make a clear ice block by directional freezing is to fill a hard-sided picnic cooler with water, place it in a freezer, and allow it to freeze with the cooler's top off. The water will only freeze into ice from the top-down, and only the last 25% or so of the ice block that forms will be cloudy. If the block is removed from the freezer before this point, one will have a perfectly clear slab of ice. Otherwise, the bottom cloudy portion of the ice block can be cut off from the clear part.

How Traditional Ice Cubes Freeze and Why They Are Cloudy 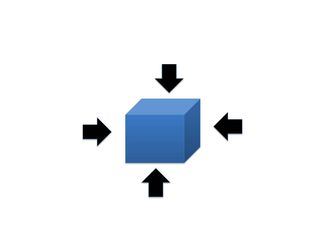 In a traditional ice cube tray, which is not insulated on any side, cool air hits all sides of the tray. Ice forms on the top, bottom, and sides, and freezes from the outside toward the center. It is the center part of an ice cube where it is cloudy and cracked (the cracking through pressure because ice expands as it freezes), while the outsides are typically clear.

We say that ice wants to freeze into a perfect crystal lattice (though want isn't the proper term) and trapped impurities and air prevent it from doing so. When water freezes, it pushes any trapped air and impurities away from the first part to freeze. In a traditional ice cube this is towards the center of the cube. Using directional freezing, it pushes the air/impurities/increase in pressure towards the bottom of insulated cooler (or the last part of any controlled-direction freezing container). 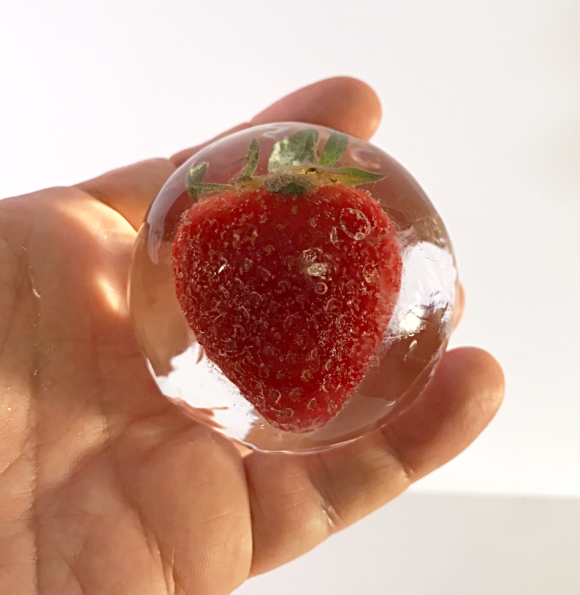 Clear ice represents purity. Crystalline purity.
Camper English is a superstar. Coolers in the freezer work so well.
If you don’t want to hassle cutting clear ice block into cubes. You can get the block completely cold in the freezer, then quench the block with water under the faucet and it will cause the block to shatter. The shattered block is fairly easy to break up with an ice pick, splitting the ice where it shattered. Naturally shattered ice is beautiful too vs. cut ice.
Shattered thin ice 1 to 1-1/2” typically shatters into small pieces. Thicker ice of 2 to 2-1/2” shatters into much bigger pieces. A 3”+ clear ice block will shatter into big pieces too big to fit in a drinking glass. With a heavy duty ice pick, digesting 3”+ (shattered) isn’t a problem. I use the same cooler (small plastic igloo cooler) to put the cubes in after breaking the ice up into smaller pieces. The mouth of this cooler fits the modern thick plastic shopping bag, so you can dump the clear ice cubes (size of your liking) into the plastic bag quickly and easily and store the ice in the plastic bag in the freezer (consumption from bag).
But when clear ice cubes are quenched, the cubes will crack too, just like the block. If you have a party with clear ice cubes you made, you should let the cubes warm up some in an ice bucket so they don’t crack like the frigid cubes do. Perfect clarity ice is very nice looking and tasting.

@Don - Thanks; I might have to give the shattered method a try.

Leaving a comment here while I'm preparing a fun presentation to my colleagues about ice making. In 2014 I stumbled upon your site (here, Alcademics) after spending months trying different methods myself. It was (and still is) really fun to read about your writing @Camper, thanks for doing this.

In the same year, I bought the Wintersmiths', also recently did an upgrade to their newer edition. These tools have made me lazy... ;)