Whoops, I've been rather lax on blogging lately - lots of talks and projects in the works. This edition of New Booze contains a few months' worth of new product launches.

Antoine Amedie Peychaud began producing his bitters in a New Orleans apothecary more than 150 years ago, eventually becoming the lead bartender of the Sazerac Coffeehouse, where he mixed simple cocktails with his bitters to much acclaim. Today, the Sazerac Company, still faithfully producing Peychaud’s Bitters according to the original recipe, is announcing a new spirit with Peychaud’s belief in quality, simplicity and mixability in mind; Introducing Peychaud’s Aperitivo.

Slow & Low 100 Proof Rock and Rye, a higher proof limited edition of its game-changing bottling that started the rock & rye resurgence. At 100 proof, this higher-octane version of Slow & Low Rock and Rye has a drier taste profile than Slow & Low 84 proof and it sports a striking hunter orange label that further distinguishes it as well.

Finished for more than three years in new American oak casks with a hearty #3 char, it contains no caramel coloring, and not a drop of grain neutral spirit. Popcorn Sutton Barrel Finished  will be available at select liquor stores in limited markets in Tennessee, North Carolina, Texas, Colorado and Ohio. The product’s retail price is $49.99.

F-80 is pretty different from firelit. Its 80 proof, made from cane spirit rather than brandy and has no vanilla like firelit does. It is slightly sweeter to balance the higher coffee and alcohol. It was intended to be a more aggressive and cocktail friendly coffee liqueur that also makes for a great 80 proof shot straight.

The price point is also considerably lower at around $32 retail.

Santera Tequila is a brand new line of tequilas that are privately owned. They’re 100% blue agave tequilas from the northern highlands of Jalisco. The Blanco is unaged, the Reposado is aged up to 7 months in American oak barrels and the Añejo is aged up to 16 months with a bit of 3 year-old tequila added to the final blend.

Bumbu  is rum made from sugarcane selected from eight countries throughout the West Indies. Bumbu is blended with water and aged in oak barrels for up to 15 years. Bumbu is aged up to 15 years in grade A oak bourbon barrels from Kentucky.

Biggar & Leith have today announced the launch of Malfy Gin – the first luxury Italian gin to be imported into the United States. Malfy Gin is distilled in a family run distillery in Moncalieri, Italy by the Vergnano family. Although the spirit is infused with Italian Juniper and five other botanicals, it is the infusion of the famous Italian Coastal lemons, including some from the Amalfi Coast, that give Malfy Gin it’s fresh and zesty aroma and palate distinguishing it from other traditional, juniper-heavy gins.

The gin is distilled in the Vergnano family’s traditional vacuum still and is bottled at 41% alcohol by volume. Malfy Gin will be distributed in the USA from March 3rd at an average SRP of approximately $30 per 750 ml (prices vary according to local taxes). Malfy Gin will also be available in Europe, Australia and a number of other countries in a short time. 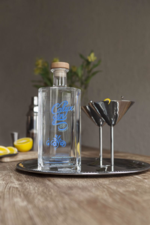 Rajat Parr, two-time James Beard winner, former sommelier and co-owner/winemaker of three wine labels
has collaborated with  distiller Stephen Gertman of Ascendant Spirits to create Calyx, a unique, limited-availability artisanal gin with 14 botanicals. the Calyx flavor profile will differ each year depending on weather
and climate, creating a distinct annual production of thegin.

Yippee Ki-Yay is what we call flavored whiskey gone right. It’s available nationally this May 2016, but was originally released on December 5, 2015, at our new distillery in Utah to coincide with Repeal Day, and to celebrate Utah’s role as the critical 36th vote to repeal Prohibition.

It’s our Double Rye! whiskey finished in oak barrels originally used to age two types of wine: Vermouth and Syrah. It sells for $64.95.

Alacran Reposado Tequila is a reposado tequila using 100% Weber Blue agave from 7-10 years old harvested in the highlands of Los Altos in Jalisco. It is matured for 4 months in American Oak barrels from bourbon. 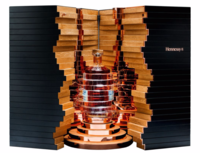 The year 2016 marks a time of transition for the Maison Hennessy as 7th generation Master Blender Yann Fillioux prepares to pass the keys to the cellar to his nephew, Renaud Fillioux de Gironde. Hennessy·8 is a literal and figurative symbol of Hennessy’s heritage of transmission from one generation to the next. It is also named after the eight eaux-de-vie it contains. Seven of these were hand-selected by Yann Fillioux to illustrate each of the seven successive generations of Hennessy Master Blenders. The eighth eau-de-vie was chosen by Renaud Fillioux de Gironde who, once he becomes Master Blender, will be the 8th generation of Fillioux to steer the Maison Hennessy’s creations.

Although every oak barrel is sanded and re-toasted, every once in a while we come across some barrels that are very special. We release those individually as Single-Barrel expressions that burst with color, flavor, and aroma. Our barrels hold only 53 gallons and angel’s share exists south of the equator too, so these reserves are very, very limited. The four latest expressions from Novo Fogo carry age statements ranging from 1-5 years.

Distilled from rice grown in the volcanic soils of Kumamoto, Kikori Whiskey is a newcomer in the world of Japanese whiskey, which has, until now, been traditionally created in the style of Scotch. After steaming the rice, the touji (master distiller) oversees the two-mash fermentation process, before distilling the mash in a single batch and casking it in American Oak, repurposed Limousin French Oak and sherry barrels from Spain. For 3 – 10 years, the subtle notes of the barrels are imparted into the whiskey, which is then balanced by the touji.

Kikori Whiskey is now available in the U.S. in California, Nevada, Arizona and Hawaii. Kikori Whiskey (750ml/41% ABV) is available for a suggested retail price of $49.99.

The latest addition is specially designed for brunch cocktails. A spirit flavored with juniper, lemon peel and Earl Grey tea, Few Breakfast Gin launched in the Chicago area last summer and is now rolling out across the globe. Few Breakfast Gin is the brainchild of distiller and production manager Steven Kaplan.

The 84-proof Few Breakfast Gin has a suggested retail price of $39.99 for a 750-mL bottle. It is currently available in seven US states, the District of Columbia and the UK, with more markets on the way.

After distillation in our eau de vie pot stills, the whiskey is aged 3–4 years in used bourbon casks and French oak wine casks, as well as filtered through maple charcoal. The whiskey is then finished in casks that had held house-made umeshu (a Japanese style of plum liqueur we made entirely from California-grown ume fruit).

Double distilled in a Vendome copper pot still, “Alley Cat” gin is apple-brandy based with classic gin botanicals and aged in a Kentucky Bourbon barrel for 22 months. It is non-chill filtered and unadulterated by any post distillation infusion of flavor or color. Only 750 bottles (375mL each) will be produced and sold at the distillery store, with a tiny selection of superlative bars and liquor stores.
Copper & Kings Alley Cat Gin (98 proof/49% ABV)
$40 per 375mL bottle

Brown-Forman will introduce the company’s first new bourbon brand in 20 years with the release of Coopers’ Craft.  Coopers’ Craft is a celebration of barrel-making and a recognition of the importance of wood when it comes to crafting bourbon. In addition to being matured in barrels raised by master coopers at the Brown-Forman Cooperage, Coopers’ Craft is crafted using a special beech and birch charcoal filter finishing process.

Hitting shelves this summer, Coopers’ Craft will be available in the following U.S. markets initially: Alabama, Florida, Georgia, Kentucky, Louisiana, Mississippi, South Carolina and Tennessee. Coopers’ Craft is presented at 82.2 proof and is available at a suggested retail price of $28.99 for a 750ml bottle.

This launch is the first of a planned series of single barrel aged rum releases. The first being the Single-Barrel 2005 expression, with 3,000 4.5-liter cases allocated to the U.S. and Puerto Rico, and the remaining 1,000 cases destined for Europe. A 2007 Single-Barrel variant will follow in 2017.  Don Q Signature Release Single-Barrel Rum is available at select liquor stores throughout the country and is priced at $39.99 for a 750ml.

Berry Bros. & Rudd Spirits and U.S. importer Anchor Distilling Company are proud to announce the introduction of a new non-age statement single malt expression from the celebrated Speyside distillery, Peated Cask Reserve, available in the U.S. market nationwide.  The Peated Cask Reserve reflects a time in the distillery’s history when it formed an association with the Islay Distillery Co Ltd. in 1887. With this historical precedent serving as inspiration, The Glenrothes Distillery selected the Vintage 1992 single malt and gave it a temporary home in a cask hailing from the peaty lands of Islay thereby giving the whisky a kiss of peat smoke to complement but not overpower the usual Glenrothes characteristics.

Humito is the world’s first smoked silver tequila. Humito is the latest addition to Dobel’s exceptional line is created by using Mexican mesquite wood during the process.

Different in flavor and production process to mezcal, this first ever smoked silver tequila.

Like the vodka, Frey Ranch Gin is an estate product, meaning it is produced From Ground to Glass, right on the ranch. The product begins with three different grains – rye, barley and corn – grown and milled right on the ranch and combined with juniper berries and sagebrush sourced from the ranch. These ingredients are joined by coriander, Angelia root, cardamom pod, lemon peel and orange peel.

Currently, Frey Ranch spirits are available throughout Nevada (Southern Wine & Spirits), California (Wine Warehouse) and Chicago (Burke Beverage) with rapid growth expected across the country. Frey Ranch is located in Churchill County and, in the midst of its beautiful 1,200-acre farm, sits a 4,600 square-foot distillery featuring a stillroom, tank room, barreling room, tasting room and a malt house. The centerpiece of the distillery is a one-of-a-kind, custom-made Vendome still that is capable of producing 10,000 cases of spirits a month. Additionally, there are four 5,000 gallon fermenters, one 5,000 gallon mash cooker, one 5,000 gallon beer well, one 500 gallon pot still, a 23-foot continuous still, and a 24-foot vodka column.

"Mexican mesquite wood during the process" hahahaha really? oh that Jose Cuervo and their BS shenanigans. Couldn't you of at least called them out on this one?

I don't know what the production process is, so I have no reason to cut this out.

Typically I just cut out all the superlatives and leave in the brand's production info. If I know something to be false I try not to post it.

Kikori Whiskey???
barreled vodka??
whisky can not be distilled from rice!!
No rules i USA?? Japan?
American champagne!
Thought you was serious!!
Regards Mr Baggus

Whisky must be distilled from grains. Rice is a grain, so it can be whisky.