Trend Report from the 2016 WSWA Convention

I've attended the Wine & Spirits Wholesalers of America convention for most of the past five or six years. The convention is a meeting of the second tier of the three tier system: the distributors who buy from the producers and sell to either bars or liquor stores as required by US law.

The majority of the happenings at the convention take place behind closed doors in hotel suites: This is where many major companies meet with all their individual distributors from many different states to talk about deals and incentives and whatever goes down on that side of things.

By the latter I mean brands created but not necessarily distilled by the company that created the brand. There are a lot of copycat brands to popular ones, like cinnamon whiskies hoping to pick up a share of the Fireball trend and cream liqueurs looking to take a bite out of RumChata.

So, with that said, here is what I observed at this year's WSWA convention:

Vodka returns to selling based on image rather than flavor.

A few years ago there was a rainbow of cake, whipped cream, and other confectionary flavors of vodka weighing down the tables. Now those flavors are largely gone (except for a few natural flavors and infusions like horseradish and cannabis). And rather than trying to sell their brands based on quality (a very challenging and expensive way to promote), vodka brands returned to the days of putting their neutral juice in fancy/sexy tempting bottles. I saw Venetia in a diamond bottle, Vavoom in a naked lady bottle, and another in a bottle of a stripper working the pole. 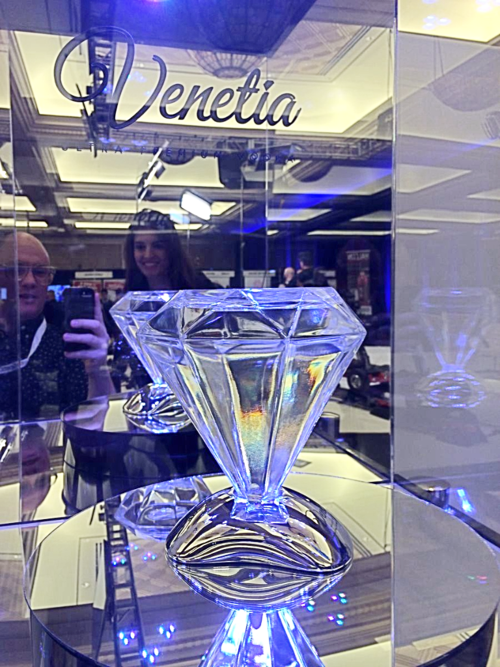 A touch of tech.

While this isn't really the convention for subtlety in spirits, I did see a few technology-enhanced products advertised. Cleveland Underground is a range of whiskies made to taste older using wood and pressure (both positive and negative) and a variety of woods including Honey Locust and Black Cherry. Vinami is a wine intolerance pill (there are some products on the floor that are not wine or spirits, such as bottle producers, packaging, and inventory control companies). Blat vodka was an exception to the above package-focussed brands, advertising it as "the only vodka in the world with no impurities." Also Royal Elite vodka offered different expressions based on the number of times it was filtered. A suite of spirits with Hungarian oak cubes in the bottle to let it "age" in the bottle includes Walrus Blood whisky, Couva rum, and Cartel brandy. 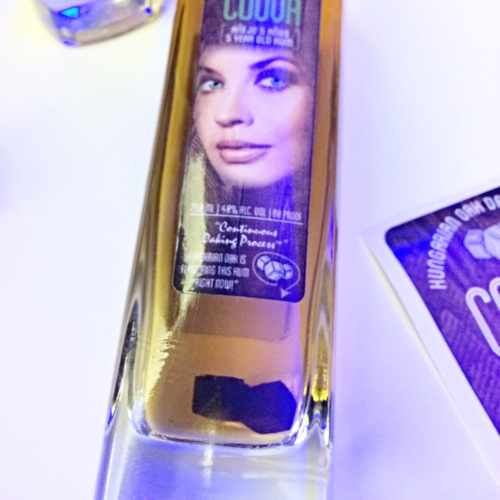 In addition to the above-mentioned diamond bottle vodka, there were some other blingy bottles. My favorite was Gold Bar ("gold finished") whiskey. There was also First Class Vodka in a gold bottle and, though less blingy and more just pretty, Generous Gin. 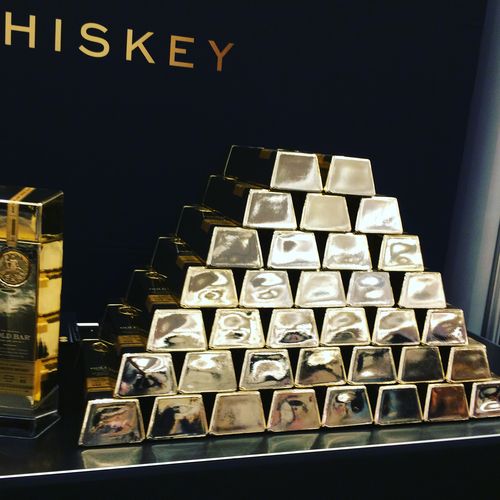 Like the previously mentioned Cleveland Whiskey, I also saw Humboldt Distillery with their cannabis vodka, and Catskill Distilling Company. This is nothing like the American Distilling Institute conference or anything, but it's nice to see some smaller farm producers giving it a go.

I saw more craft-style cocktail mixers than usual this year (one sees a lot of low quality, mass market stuff usually), including a new cane sugar in a bottle ginger beer from Barritt's, Proof Syrups from Atlanta, Purely Syrup, and even some shrubs from Crafted Cocktails. 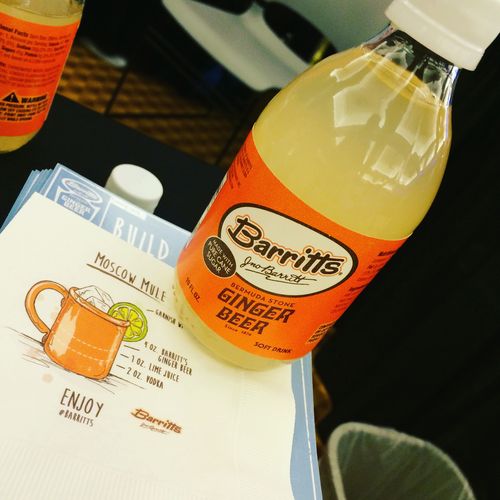 Some photos from the cocktail competition.

In the early days, you'd rarely taste any good drinks, but now it's a competition with hardly any bad cocktails - and clearly these folks have been paying attention to cocktail competitions: There are full on tiki experiences, hand-carved ice, self-brought glassware, and other amazing tricks. It's a heck of a fun competition to judge. Here are some photos. 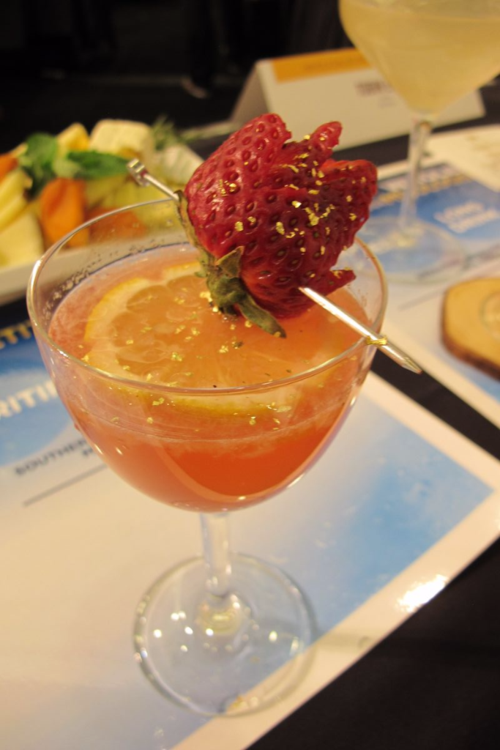 I liked more than two things, but since these didn't fit into another category: 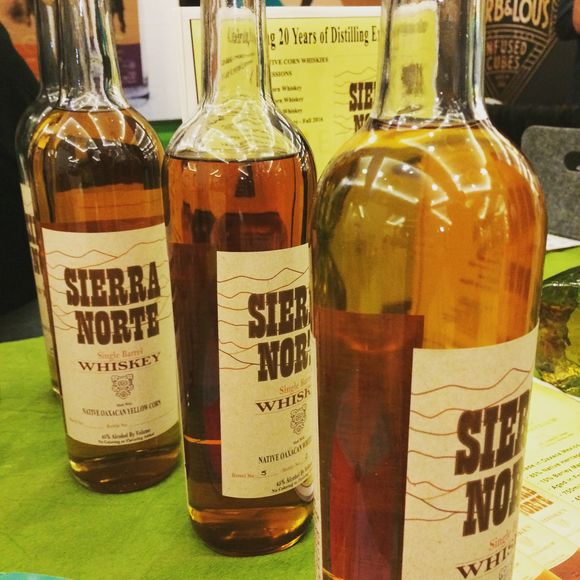 And I suppose this should go into the "better mixers" category, but I liked this concept: Herb and Lou's Infused Ice Cubes. Much like frozen margarita mix, these are flavored ice cubes but instead of throwing them into a blender, you put them in a cocktail shaker and shake up a drink. No other ice or mixers needed and the packaging was well done too. 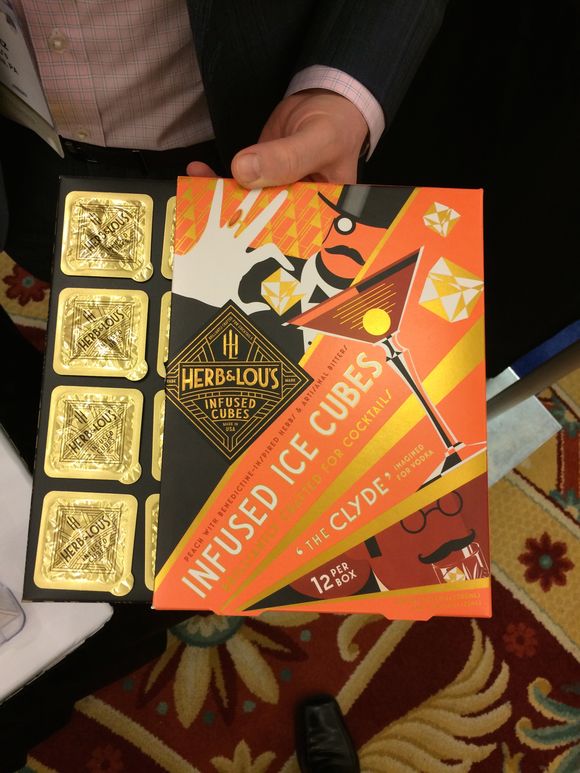 So that's my report. Time for a nap.