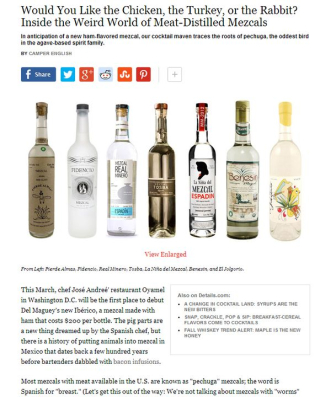 A few years ago (Feb 2014) I wrote a story about pechuga mezcal, one of the most in-depth ones I'd seen at the time. The story was for Details.com, and the website (and magazine) no longer exist. Thinking it's a shame that the story disappeared (the URL now redirects to the front page of GQ's website) I am pasting it here.

Would You Like the Chicken, the Turkey, or the Rabbit? Inside the Weird World of Meat-Distilled Mezcals

In anticipation of a new ham-flavored mezcal, our cocktail maven traces the roots of pechuga, the oddest bird in the agave-based spirit family.

This March, chef José Andrés' restaurant Oyamel in Washington D.C. will be the first place to debut Del Maguey's new Ibérico, a mezcal made with ham that costs $200 per bottle. The pig parts are a new thing dreamed up by the Spanish chef, but there is a history of putting animals into mezcal in Mexico that dates back a few hundred years before bartenders dabbled with bacon infusions.

Most mezcals with meat available in the U.S. are known as "pechuga" mezcals; the word is Spanish for "breast." (Let's get this out of the way: We're not talking about mezcals with "worms" in the bottle, which are added afterward and are not actually worms, but usually arean indicator of a crappy product.) The first pechuga on the U.S. market came from Del Maguey; it is the same as the vegetarian Del Maguey Minero but infused with fruit, rice, and other ingredients and redistilled with a chicken breast hanging from strings inside the still. The technique isn't unique in the spirits world; many gins are made in a similar method called vapor infusion. Just not with livestock.

Odder still, there is actually a market for this stuff. Several other brands—like Pierde Almas,Fidencio, Real Minero, Tosba, La Niña del Mezcal, Benesin, and El Jolgorio sell pechuga mezcals, though most use turkey (guajolote) rather than chicken. Pierde Almas also sells a conejo mezcal, which swaps in a rabbit, and I've heard a few mentions of a venison mezcal in Mexico, though it's not available in the U.S.. If you ask the folks behind the mezcal companies, they'll tell you the pechuga tradition dates back centuries. The producers of Del Maguey's pechuga trace it back at least 75 years, and the creators of El Jolgorio say it's been around for 100 years through five generations of distillers. (This information comes through mezcal importers, rather than the small distillers living in remote villages in Oaxaca who may not even have phones to give interviews, let alone Internet.)

According to the son-in-law of the distiller at Mezcal Vago (which has a corn-infused mezcal called Elote), the neighbors would request a special-occasion treat for events like weddings and baptisms. So the distiller got the idea to take the mezcal he'd already made, infuse it with dried corn from the family farm, and distill it another time. It proved so popular that they began bottling it commercially along with the base mezcal.

Del Maguey's version includes, in addition to the hanging chicken breast, an infusion of wild mountain apples and plums, plantains, pineapples, almonds, and uncooked white rice. According to importer Ron Cooper, the chicken balances the fruit. Fidencio's pechuga uses plantains, apples, pineapple, guava, and sometimes quince and pear, says Canadian importer Eric Lorenz. He also notes that Pierde Almas' version uses some combination of those ingredients, plus cloves, star anise, and a bag of rice, and then either turkey breast or rabbit.

The fruits and spices, in all likelihood, once helped mask the taste of some lackluster mezcal in the early days of distillation in Mexico. Today, however, most if not all of the pechuga-style mezcals are made from the same mezcal that the importers sell unflavored—so you could try the before- and after iterations in a taste test if you like.

Some of these ingredients are seasonally driven. El Jolgorio pechuga is made around the Feast of the Virgen de los Remedios (near September 1), while most others are made later in the year (November). The makers of Fidencio say their product is made specifically during the quince harvest.

"Basically, when they had something to celebrate like harvest abundance," Lorenz says, "they pulled out all the stops to do so, including making their usual beverage better for this and other special occasions."

Cooper, the founder-importer of Del Maguey and basically the guy who kicked off the whole mezcal renaissance, says the taste of chicken mezcal is quasi-feminine when compared to the more masculine ham version. Other tasters rely on textural descriptions, invoking the words umami and unctuous for these mezcals.

"Among the 15 or so pechugas I've tasted, truly the most prominent flavor in all of these is undoubtedly the fruit components," Lorenz admits. When I'm feeling extremely on my game (and when I'm no longer sober), I can indeed detect mild chicken- or turkey-broth hints . . . and I'm pretty sure those are the typical conditions under which everyone else believes they can detect the taste of the meat as well."

Perhaps it's easiest to think about these meaty mezcals like the strawberry-rhubarb pie your grandmother bakes from ingredients in her garden that she brings to the family-reunion picnic—a long-standing homemade delicacy for special occasions. But instead of fruit in a pie, it's a carcass in agave juice.

As for Andrés' Del Maguey Ibérico: It may not be like drinking bacon-flavored tequila, but it is made with the finest free-range, acorn-fed, black-footed Ibérico pig flown in from Spain. And I bet his family reunions are one hell of a good time. Where can you try it if you're not in D.C.? See our list below:

26 AMERICAN BARS THAT SERVE PECHUGA MEZCAL,
IN NO PARTICULAR ORDER

I know your list isn't meant to be comprehensive, but it's a shame to miss Mezcaleria Las Flores in Chicago, which has at least four pechuga mezcals on their menu, including Del Maguey Iberico.

Of course, I just now realized this is an older article. But still a good addition.

Sure is! I didn't make it there my last time in Chicago but it's on the list for the next visit.