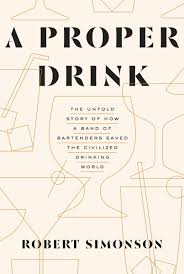 On September 27, New York Times writer Robert Simonson will be in San Francisco for a book launch party for his new book A Proper Drink. The party is at Bar Agricole and it's $50 for all you can drink and eat. Tickets are still available here.

The book is the history of the global cocktail renaissance from London to New York to San Francisco; tracing the people, bars, and cocktails that changed the way we drink now.

In advance of the visit, I sent Simonson some interview questions relating to the book.

You cover the pre-history/back-story of the craft cocktail renaissance in addition to the main event. In your mind what or when or where is the actual "start" of the movement? There were a lot of years between the Rainbow Room and the next important bar it seems.

Simonson: It’s true. In terms of New York City, Dale DeGroff ran the first leg of the relay by himself for a long time. But there were things happening elsewhere in the late ‘80s and 1990s, in San Francisco, Portland, Seattle, Boston and even cities like New Brunswick, New Jersey, and Arlington, Virginia. It took an awful long time to coalesce, for all the threads to come together. If I had to pinpoint a start date for when the movement began in earnest, I’d say the opening of Milk & Honey on December 31, 1999. That was the un- ignorable event, the bar that the media and bartenders couldn’t look away from. The story in the UK, of course, is different. I’d put the start there to the opening of the Atlantic Bar and Grill in 1994.

Thanks to the press tracking the movement from early days, this era has been pretty well covered (but obviously not in a narrative overview until this book). Do you think there are any persons in the movement that hadn't been given their due or that the public should know more about?

Simonson: There are quite a number of figures who are legendary within the bar industry, but are completely unknown to the public. They are the people who work behind the scenes, who are not bartenders, bar owners or distillers. They often work both sides of the fence, sometimes functioning as educators and mentors to bartenders, given seminars and such; other times as representatives for liquor brands or spirit categories. It’s this split nature of their professional personality that, from the public’s point of view, and sometimes from the media’s, makes them difficult to assess and understand. Because of that, they perhaps don’t get their due. Steve Olson is a good example of this sort of phantom force. And then there are the laymen experts, who have furthered the movement completely through their own enthusiasm, who often never hold a job within the industry—people like Robert Hess, Ted Haigh and Martin Doudoroff. They don’t get their due, either. Hopefully, this book will correct that a bit.

I would imagine it was tough to choose what people/places to keep and versus leave out of the book. If you had 2 more pages, what else would you include?

Simonson: There were a number of bartenders and journalists who gave me great interviews that ended up being “background”—that is, their insights contributed greatly to my understanding of the movement, and helped me stitch the whole story together, but for one reason or another, they are not directly quoted in the book. If I had two pages more, I would work in quotes from those people.

The book is about impactful people (and bars) over the last 10-20 years. Who do you think is having an impact right now that will echo through the next decade?

Simonson: For better or worse, the people who are making an impact right now, in my opinion, are making a difference in terms of business approach, rather than behind the bar. Danny Meyer, with Porchlight and Green River, showed what happens when a powerful restaurateur opens a cocktail bar. I wouldn’t be surprised if Porchlights proliferate like Shake Shacks. And the Dead Rabbit-Black Tail guys have written the book on how to open “event bars,” and how to keep them relentlessly relevant. I’d like to see more lonely iconoclasts who are go their own way and are focused on what’s in the glass and their own patch of real estate. That’s where true innovation comes from. But right now, there’s a lot of competitive keeping-up-with-Joneses within the bartender community.

You also tracked the rise and spread of brand ambassadors. What is your impression overall - are they a mere leech on the system, or do they contribute in some way?

Simonson: I think they contributed a lot at the beginning of the revival, in the ‘00s. They were a great change, and also a great improvement, from the liquor salespeople of old. They were educators and inspired bartenders and bars to do better and take their careers seriously. But it’s changed. So many good bartenders hopped on that gravy train and there was a talent drain at cocktail bars. And once bartenders went brand ambassador, they usually didn’t come back behind the bar, not fully. In the past few years, I’ve felt the big liquor conglomerates have grown impatient with the altruistic side of the ambassadors and just want to see results. I think the era of the brand ambassador may be on its way out. Then again, the Spirited Awards at Tales of the Cocktail has two awards for Best Brand Ambassador. Who else does that? Do the Oscars have awards for best film distributor? It’s a testament to their standing within the industry, even now.

What person/bar/thread/idea surprised you most in writing this book?

Simonson: Many people surprised me—and impressed me—in their complete candidness. Only a handful struck to the script and gave canned or safe responses. There seemed to be a real hunger and real desire to tell the story of this renaissance. It was very refreshing. Conducting these interviews was a very rewarding experience.

What would you say is the current status of the craft cocktail renaissance? Is it over? Does it continue unabated? In other words, where are we now?

Simonson: No, of course it’s not over. There will be more bars and more bartenders and more cocktail books and more everything. But it does feel like it’s reached a plateau, like a lot of people are looking around and saying “What’s next?” and nobody really has the answer. That's not necessarily a bad thing. The idea that if there’s not continual growth and progress, that equals regression, is a fallacy. It’s ok if we just have a lot of good bars that serve good drinks with good spirits for a while. That’s a wonderful place to be. That’s what we wanted, right? But you never know. There could be an industry-rocking innovation or personality or drink around the corner that we just can’t visualize right now.

Thanks Robert! I'm looking forward to the party tomorrow.