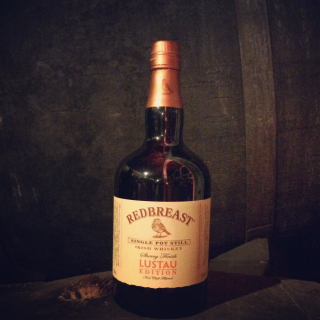 If it wasn't clear already, I'll fly anywhere for a good drink.

Today in Jerez de la Frontera, the heart of the sherry region in Spain, Redbreast Single Pot Still Irish Whiskey launched their Redbreast Lustau Edition. The unveiling took place at the Lustau bodega, but I was able to interview Billy Leighton, Head Blender at Midleton Distillery, earlier in the afternoon.

Leighton says, "Sherry is the key flavor driver in the Redbreast range. The challenge was to come up with a new, different angle on the sherry."

Leighton said they were worried that against the big bold flavor of Redbreast, it would be easy for the subtleties of the seasoning cask to  get lost, "So we took the signature Redbreast 12 year profile and tweaked it to open up some space in the profile for the new seasoning characteristics. But to do that, my job as blender was to consider where can you strip back some of those flavors? The first thing that [greatly impacts] flavor is the length of time in the cask. So we had to look at the age profile and we took the age back only slightly of some of the components, so you weren’t going to get those heavier characters that come with age."

He continued, "Redbreast 12 is only made up of first-fill: for both bourbon and sherry casks; so we took out some of the first fill elements as well [in the new product] so you didn’t have the same seasonsonsed cask contribution. In doing that we were able to get a provile that was going to allow the Lustau characteristics to come through and be the feature."

Irish Distillers (Jameson, Redbreast, etc) have long had a relationship with Lustau to prepare their sherry casks, but it's not their only purveyor. Far more of their casks are prepared by the A. Paez cooperage, and Irish Distillers is able to specify the type of sherry they'd like the casks seasoned with, and even tweak the casks themselves to be heartier for stacking in the palletized warehouses at Midleton. (The casks are flatter rather than rounder, with more hoops, and the bung is off-center.)

The Lustau casks they used for this new edition of Redbreast don't differ from what they typically use at Irish Distillers so it's not really a special barrel preparation with different sherry; it's a special blend/finish.

So that's for the how, now for the why:

Redbreast Lustau Edition launches in the US on Oct 1 retailing for $69 (price to be confirmed). It is a permanent addition to the Redbreast range along with the 12, 15, 21, and 12-year cask strength.

With this guy sitting next to you at the dinner table, you would only know about the round-the-world trip because he told you about it. Now that jet set material!