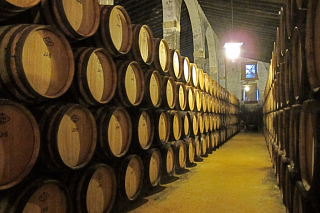 This is a simple point but one I didn’t know before. Often you’ll see that scotch and other whiskies are aged in Spanish oak barrels that previously held sherry. However, I’ve always been told the barrels in the sherry soleras are American oak. What gives?

Thanks to Billy Leighton, Head Blender at Midleton Distillery, I have an answer. He says that yes, the true barrels on the sherry soleras are American oak and as old as possible. They do not want wood influence in sherry so the barrels don’t lend any flavor.

Traditionally, sherry was shipped to the UK in barrels (rather than bottles), and for that they would use the much less expensive/lower quality (at least at the time; I can’t speak for that now) Spanish oak casks, rather than American oak ones.

After being emptied, those casks would have been the ones reused to age scotch and other whiskies.

As I understand it, the 'sherry barrels' for aging non-sherry products are made specially, and 'seasoned' or 'wine treated' by soaking them with some reused (bad) sherry to take the oaky edge off. No one really wants to talk about this except good ol' WhiskyScience:

Thanks for the links! Yeah I think it's still constantly changing. Most of the casks for Jameson are controlled by the cooperage, which also makes them in custom shapes better for stacking in the paletized warehouse.

As far as the wine, people indicated that the sherry used to treat these particular casks at Lustao would actually enter the solera afterward. They would treat a cask for 6 months, dump the slightly woody wine into a solera, then do another few rounds of sherry for each barrel. That way the sherry was not ruined by the new casks completely and could go into the solera system.

I somewhat doubt that this is how all sherry is handled after barrel seasoning, but it does make sense that you wouldn't have to just dispose of the wine or distill it into brandy afterward given the volume of casks going to Ireland and Scotland.