Brands, Bottles, and Books: An Interview with Steven Grasse 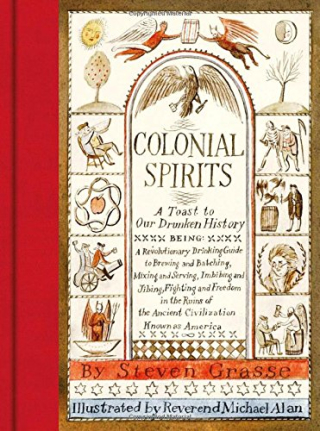 A couple weeks ago I sat down with Steven Grasse, the author of Colonial Spirits: A Toast to Our Drunken History.

Grasse is better known as the creator of brands Hendrick’s Gin, Sailor Jerry Rum, Art in the Age, and more recently Lo-Fi Aperitifs.

He recently started a distillery of his own in rural New Hampshire called Tamworth Distilling. His Philadelphia-based company is called Quaker City Mercantile employs about 65 people.

So What Do You Do?

Clearly he wears a lot of hats. I was trying to figure out what's up with that. I asked him if Quaker City Mercantile was an ad agency, a branding agency, or what. He said, "We’re a spirits company that does corporate gigs to pay for experimentation."

For twenty years his agency has been in charge of the branding for Hendrick's Gin, with all of its wacky, creative imagery. I asked what it takes to create a successful brand. He said, "Good liquid, a good story, good packaging, and consistency." He described the story and consistency as, "Creating a world, but you need to have the freedom to keep creating layers in that world... We never dumbed it down (with Hendrick's). Keep it interesting and people will find it. "

As for those corporate gigs, well they don't own most of the brands they work with but have creative control over their image. They've also worked with major clients like Guinness,  Pilsner Urquell, and Narragansett beer.

For new brands they create, Grasse says they get a piece of the brand (percentage of ownership I assume). His most recent creation is Lo-Fi Vermouths. The brand is (mostly) owned by Gallo wines, and the actual juice in the bottle was developed by San Francisco bartender Claire Sprouse.

He says now when a company asks him to create a new brand, they don't so much give him a brief like, "We want a gin brand" (as William Grant did 20 years ago) but more of, "What do you want to do?" He said, "When you’re working with a partner you have to look at what your partner can really do well." For Gallo, it's a natural extension of wine to create vermouth.

If you haven't heard of the brand, it's probably because you don't live in San Francisco where it was launched. The brand will next launch in New York and then if all goes well, become available nationally.

For Lo-Fi, Grasse says, his goal and challenge is to demystify the vermouth category. "Ultimately it’s Gallo and I have a get every housewife in America to drink it as a spritzer," but they were also thinking of bartenders drinking 50-50 Martinis.

And thanks to the success of earlier brands, he says they have the time to build the brand and the category. 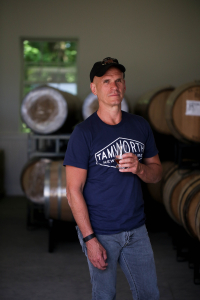 So, why get into the usually-not-so-profitable world of books? Grasse said that the publisher asked him to do it. The book features not just historical information, but many recipes taken from historical ones or adapted to modern tastes. Clearly there was a ton of testing involved in these unusual colonial recipes- Grasse says he had about ten people working on the book.

He says the book is for sale in many gift shops in museums and historical sites in the US. That's a niche market I wish I had thought to cater to!

Check out the book on Amazon.

"We’re a spirits company that does corporate gigs to pay for experimentation."

That answer says a lot about their creativity.