The Seven Styles of Beer Cocktails

I love different systems of organization and categorization, as I am a nerd who likes putting things into boxes.

I received permission to reprint that section of the book below. 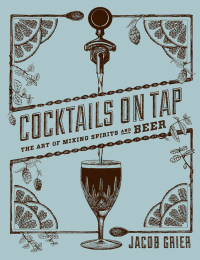 Posted with permission from Cocktails on Tap, copyright 2015 from Stewart, Tabori, and Chang, a division of Abrams.

Like beer itself, beer cocktails come in so many varieties that any attempt to make firm classifications among them is bound to leave a few things out. Nonetheless, there are a few types of beer cocktails that come up repeatedly, patterns in mixing that can be used as templates to create new drinks.

Prepared beers
The simplest beer cocktails, these are beers that are modified with spirits, spices, or other ingredients to take on additional flavor. The Boilermaker is an obvious example. The Michelada and the Picon Bière are other classics in the style. Beer remains the main ingredient in these drinks and they’re generally served in a large glass.

Beer-topped cocktails
These are drinks in which the base could almost stand as a cocktail by itself, combining spirits, juices, and syrups, often shaken or stirred with ice before being poured into the serving glass. A complementary beer is then poured on top of this mixture, much as one might pour soda or ginger ale into a long drink. Many contemporary beer cocktails, like the Dark and Stoutly or the Portland Rickey take this approach.

Beer-incorporated cocktails
These are drinks in which beer is treated like any other ingredient, shaken or stirred along with everything else. This approach works especially well in tiki cocktails, where shaking a bitter beer such as an IPA with the rum, juice, and syrups gives a touch of a bitterness and big, frothy head. The Mai Ta-IPA, Iron Island, and a few other drinks in the Contemporary Cocktails chapter use this technique.

Beer flips
Modern “flip” cocktails are made using a whole egg. Early recipes for flips involved heating rum and beer with a hot poker, with or without eggs. Contemporary flips tend to be shaken with ice and served cold. Regardless, the use of dark beer in egg drinks is a winning combination, and it turns up in the Averna Stout Flip and Beer Nog.

Cocktails with beer syrups
Sometimes the use of beer in a cocktail starts long before serving the drink. Beer can be reduced on the stove and combined with sugar and spices to make a flavorful syrup. Fruity lambics are prime candidates for this treatment, although dark beers can work too, as demonstrated in the Vandaag Gin Cocktail and the Bolt Cutter. Beer can even be cooked into a jam, as in the Ramble On.

Beer punches
Beer has a long history in punch, to which it both adds its own flavor and balances the strength of higher-proof spirits. The Ale Punch, Brown Betty, Blow My Skull, and Abbey Street Punch are all excellent examples of punches that call for beer. Though most of the recipes in this book are scaled for the individual cocktail, these are wonderful for entertaining larger groups. A bowl of beer punch relieves the host of bartender duty and provides a convivial spot for guests to gather.

Hot beer drinks
Hot beer drinks may sound strange, but they were once an important part of drinking culture. On a cold night, they can be just the thing to shake off a chill. I’ve devoted an entire chapter to these drinks in the hope of reviving them for a modern audience that has likely never had the pleasure of tasting them.

If any of these beer cocktail types seem intriguing, I suggest you buy yourself a copy of Cocktails on Tap to learn how to make them. Mmm, eggs and beer.