Lies I've Been Told about the Seelbach Cocktail 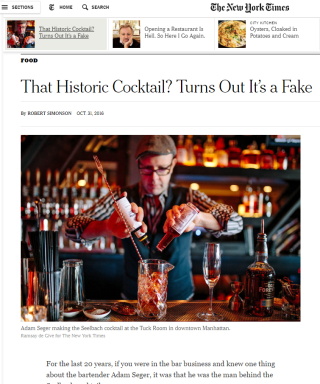 Robert Simonson in the New York Times reported yesterday that the Seelbach cocktail was the invention of Adam Seger, former bartender at the Seelbach Hotel in Louisville, and not in fact a resurrected pre-Prohibition classic.

Seger created the cocktail and the backstory to go along with it.

In 2012 I was hired to write a story for Mixology Magazine in Germany about the drink, so I interviewed Seger in email and briefly on the phone. I have pasted the story below. One "fact" told to me that didn't make it into the article was that Seger said that a group of Irish interns worked at the hotel and one did a history project. (If memory serves, this is the person responsible for first 'finding' the drink on a menu.)

Additionally, Seger said that Max Allen relayed the story to him around 1997, and that Allen was in his mid to late 60s at that point.

Here is a portion of the story I wrote:

The Seelbach cocktail was created at the Seelbach hotel (now the Seelbach Hilton), grand old hotel in downtown Louisville, Kentucky whose attractions included that it was “absolutely fireproof” and that it later had air conditioning in the restaurants. The hotel was finished in 1905 by two Bavarian brothers, Otto and Louis Seelbach, and on opening day 25,000 people came to look at the inside of the hotel.

The Seelbach had as its guests Al Capone and F. Scott Fitzgerald, and the Hollywood movie, "The Hustler," starring Jackie Gleason and Paul Newman features scenes shot in what is today The Oakroom, the hotel's 5-diamond restaurant. The hotel proved so popular that the owners immediately expanded it, and in 1907 this expansion included the glamorous, Bavarian-style Rathskeller bar and restaurant with its ceiling of 24 karat gold over stretched leather illustrating the 12 signs of the zodiac.  After Prohibition ended, the bar has only been used for special events, but it was here where the Seelbach cocktail was born.

The Seelbach Cocktail
Original, Pre-Prohibition Recipe rediscovered by Adam Seger in 1996 as Director of Restaurants of The Seelbach, Louisville, Kentucky.

Chill the first four ingredients with ice and pour into a chilled champagne flute. Top with sparkling wine. Rub an orange twist around the rim of the cocktail and drop into the flute. Serve Immediately.

Max Allen Jr., a third-generation bartender whose father worked at The Rathskeller before Prohibition, remembered his father talking about the drink. He relayed the creation of the Seelbach cocktail to Adam Seger, who relayed it to us.

It was circa 1912 and a young couple from New Orleans was on their honeymoon at The Seelbach. The gentleman ordered a Manhattan with Peychaud's bitters and Old Forester bourbon, the world's first bottled bourbon. The new bride ordered a Champagne Cocktail with Korbel Brut (one of the oldest wineries in the US).  The bartender prepared the sugar cube for her Champagne cocktail with Angostura, started to chill the gentleman's bourbon, and opened the sparkling wine- which bubbled over from the flute into the Manhattan. The bartender combined these two drinks, but set them aside to remake the cocktails for the newlyweds. He then tasted the mistake out of curiosity, and with a bit of tweaking, The Seelbach Cocktail was born.

Eighty-five years later, Max Allen Jr. was one of the only people who remembered the cocktail at all. As far as we know, it wasn’t listed in any cocktail books during its day. Adam Seger, who today lives in Chicago as a consultant and creator of the liqueur Hum Botanical Spirit, was the director of restaurants at The Seelbach in the late 1990s. He was researching the history of the hotel and came across an old menu from The Rathskeller that listed the Seelbach, and included the recipe.

Seger asked Max Allen Jr., who was one of his mentors in bourbon knowledge, if he remembered the drink from his time at the hotel, and Max relayed the story above. Seger then put the drink back on the hotel bars and restaurants menus.

As the Rathskeller bar is no longer open, today you’ll have your Seelbach either in the fine dining restaurant the Oakroom, or more likely in the loungey Old Seelbach Bar off the lobby. Seger served it there as a secret cocktail: He didn’t list the ingredients, but pre-blended the bourbon, triple sec, and bitters. Even the bartenders didn’t know what was in the drink for years.

Author Gary Regan became a regular consumer of the Old Seelbach Bar and a fan of the cocktail when he stayed at the hotel during the promotion of “The Book of Bourbon” and during the writing of “New Classic Cocktails.” Gary prodded Seger for the recipe, offering to make it famous in the book he was writing.

After seeing the recipe, Gary reportedly responded in his usual fashion. He said, "I thought you were full of bullshit, but seeing the year and heavy use of bitters, typical of the era, I see you are not. I'll be putting the recipe into New Classic Cocktails."

From there, the drink was finally ready to leave the confines of the hotel.

But How Does That Make You Feel?

I haven't decided how much I care about this yet, so I guess I'm not too broken up about it. Reactions from bartenders on Facebook vary from, "Let they who have never made up the story to a cocktail cast the first stone..."" to "Now I have even more respect for him as a creative individual with a knack for marketing," to "why are purely selfish fraud and dishonesty things that are so quickly shielded, if not actually celebrated and enabled?".

My role in this was to pass along the information I gathered.  Obviously I'm not thrilled about being an unwilling participant in spreading misinformation, as I'm a writer who works really hard to avoid mistakes.

On the other hand, it's cocktails and not thermonuclear war. Luckily the story came out nearly 5 years ago, and in cocktails, history is a moving target. I stand corrected.

I guess I can say for now that I would definitely have a drink from and with Seger again (Have you had his drinks? They're delicious.) But should I interview him again I'll be requesting backup documentation.

friends and I were attending a bowling tournament in Louisville. We had spent the weekend bowling, drinking, and eating. On Sunday we walked into the cocktail hour before the banquet and thought too many people no place to sit, my friends Mark and Terry looked at me and we ended up in the bar right off the lobby. I mentioned I had never had a Seelbach cocktail and Mark said the same thing. we both ordered one and Terry ordered a rum and coke. I can tell you we were drunk well Mark and I were. but it sure was good.
nice waitress and bartender also