Nothing Shaken, Nothing Stirred: The Perennial's Strained Relationship with Ice

San Francisco restaurant The Perennial has a cocktail program in which none of the drinks on the menu are either shaken or stirred. What's up with that?

The program, lead by Jennifer Colliau (also of The Interval and Small Hand Foods) focusses on reducing waste with a big emphasis on water waste. 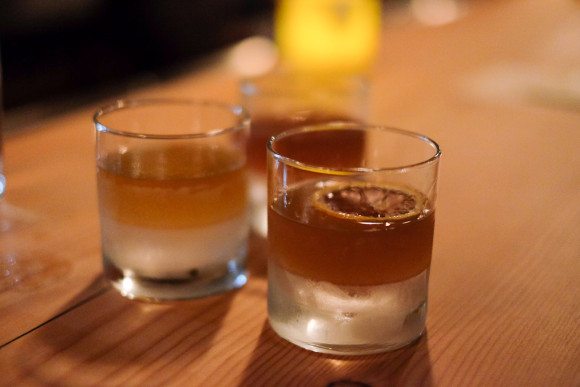 Ice frozen into bottom of glasses. Photo by Jason Rowan.

According to Colliau, both Kold Draft and Hoshizaki ice machines (which produce the large clear cubes in most better bars in the US) waste 50% of the water that goes into them. The way these machines make their ice is that water runs over or is sprayed over a cold plate; and apparently the run-off is simply sent down the drain.

The Scotsman pellet ice machine, on the other hand, she says is 95% efficient. Thus the desire was to not use the water-wasteful machines in the program. They use only the Scotsman machine, but they don't use it for everything.

For stirred cocktails on the menu at The Perennial, the drinks a batched in advance and are served in glasses in which a specific amount of water has been frozen to the bottom (glasses are kept in the freezer obviously). Stirred drinks on the menu are also pre-diluted so they don't need to be stirred but rather just poured. The liquids are kept refrigerated until service, then simply poured into the ice-containing glasses. I asked Colliau how she developed the system. She said:

I originally stirred these drinks to various temperatures, depending on their alcohol content, until they tasted the best. I measured the drink going in to the beaker then out to see how much dilution resulted from the ice melt. Then, because all of our freezers are the same, I took that dilution proportion and held the resulting drink in the freezer to make sure it tasted great even at that colder temperature.

Served in rocks glasses with ice frozen into them, approximately every 5 minutes the drink gets about 5 degrees warmer until it hits around 35F. It's important that the drink taste delicious over time.

Ideally we would White Lyan-style this execution and have different freezer temps for different drinks, but we use these freezers to chill glassware and keep sherbet and large ice in them, so we hold them all cold and manipulate the dilutions to work for each drink.

For shaken cocktails, things are even more complicated - the act of shaking is to roughly mix and emulsify ingredients together. To accomplish this, they use 1/3 cup of Scotsman ice, and run the cocktail through a blender in a small mason jar until there is no ice left. Thus the drink is "shaken" and no ice is dumped out at the end. Colliau says she'd definitely prefer a less noisy option, but it's the best they can do so far. 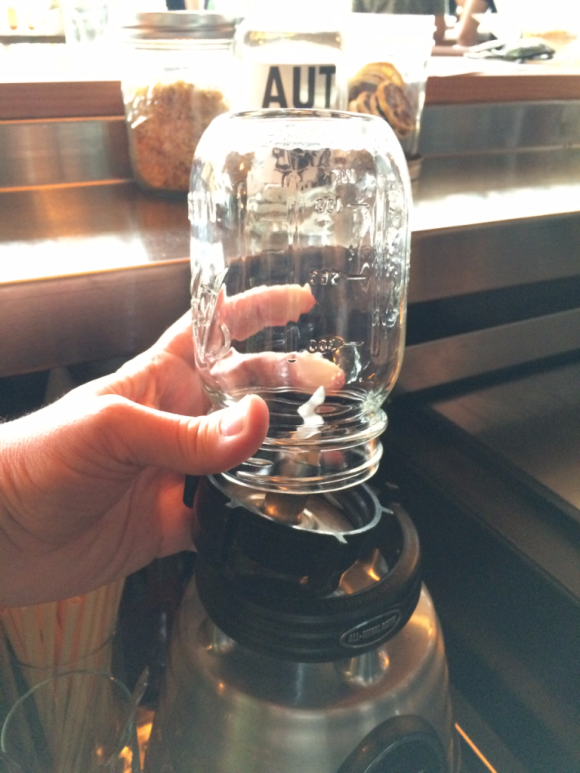 Mason jar mouths fit blender blades. "Shaken" cocktails are blended until the ice is all gone.

For off-menu cocktails, they have cubes from 2" Tovolo ice cube trays that they can use for rocks or cracked for stirring.

For off-menu drinks that are not pre-diluted, they stir drinks to temperature; as temperature directly relates to dilution.

The idea is that because ice kept in the well is basically at 32 degrees (F), all dilution of the drink will result in known temperature reductions (and vice versa). Thus to serve a drink the bartender can put in some cracked ice in the glass, stir a bit, prepare other more complicated drinks while it is diluting/melting, then check the temperature and stir more/add more ice if needed, until it reaches the desired final temperature. Any extra ice will be dumped.

Colliau notes, "Cobbled ice has so much surface area that it over-dilutes too quickly to stop when the drink is ready to go." 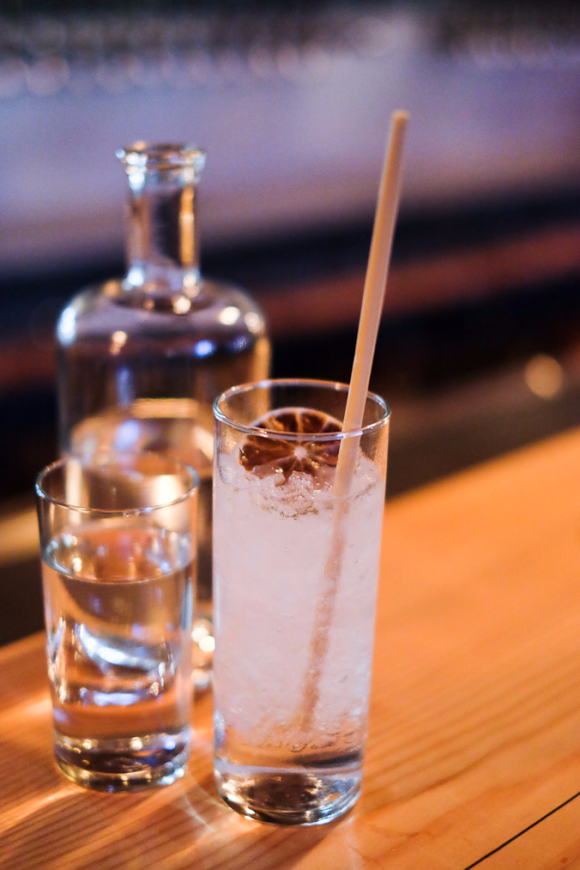 Colliau says, "These are temps that I like for certain drinks, and they are guidelines rather than hard rules. Above all the drinks should be delicious! Using temps makes consistent execution across staff much, much easier."

I'm sure there are tons more environment-saving considerations and processes in place - and this is just on the drink side of the program. This is definitely a more thoughtful process than pretty much every other bar attempting to reduce waste. Really, really impressive.

Homework: Colliau says she got a lot of information about carbon footprint of transporting bottles and other ingredients from the book How Bad Are Bananas? I'm planning to read it one of these days.

It's really great that bars are trying to reduce waste. Everyone should try to cut down its amount in order to save the planet for our future. Environmental problems are so acute nowadays that I even chose this topic for my dissertation. It's almost finised now, except of an annotated bibliography which I decided to order from https://au.edubirdie.com/annotated-bibliography-writing-service. I hope that my work shows waste problems from a different perspective and can be helpful for science.