I Waited in a Long Line for Whiskey, or, A Heroic Tale of Endurance

6 AM, December 3, Denver: While using the port-a-potty, my glasses fogged over with the steam rising from my pee. I knew at that moment I had made the right decision.

A couple weeks earlier, I had been invited to the Stranahan's distillery for the release of their annual Snowflake bottling. The press trip would involve a helicopter ride into the snowy mountains and then waiting outside overnight along with hundreds of other people for the whiskey to be released at 8AM.

Cold weather? Heights? Waiting overnight in a line for drinks?  These are all things I very much do not like, yet I very much *do* like to be made uncomfortable. Count me in. 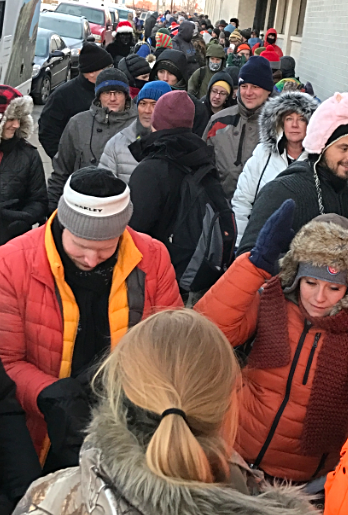 Arriving in Denver, we were told the helicopter ride would not be happening due to poor weather. I was relieved and disappointed as you'd expect. The point of the helicopter ride was to visit Crestone Peak - the Rocky Mountain peak after which this year's Stranahan's Snowflake whiskey was named. (Each annual bottling is named for a different peak, and this year is the 100th anniversary of the first successful summit of Crestone.)

Luckily the clever public relations team found a new way to arouse my discomfort, by taking myself and the other journalists on the trip to a western wear store to buy a cowboy hat, and then to perhaps America's least vegetarian-friendly restaurant. Well-played, team.

The store in question is Rockmount Ranch Wear, and there I picked up a snazzy new hat without too much fuss. The restaurant is The Buckhorn Exchange, Denver's oldest restaurant, taxidermy museum, and server of elk and yak meat. While I didn't eat much there, nor have more than one cocktail (their Old Fashioned has ginger ale in it), I did enjoy plenty of whiskey with Stranahan's distiller Rob Dietrich. I peppered him with nerdy distillery questions that I'll talk about in a future post. (post is here) 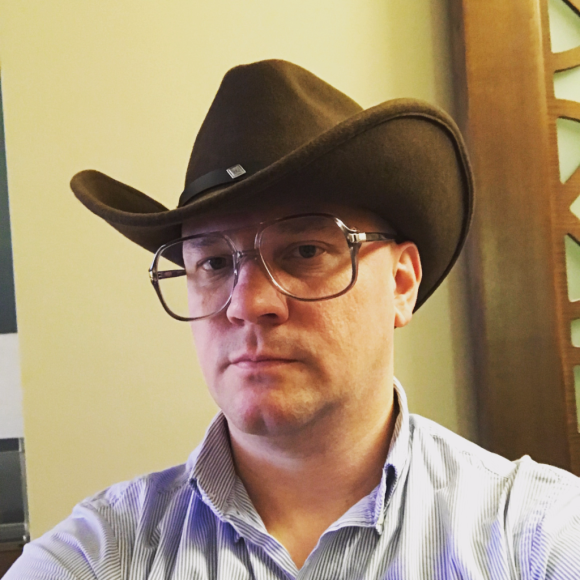 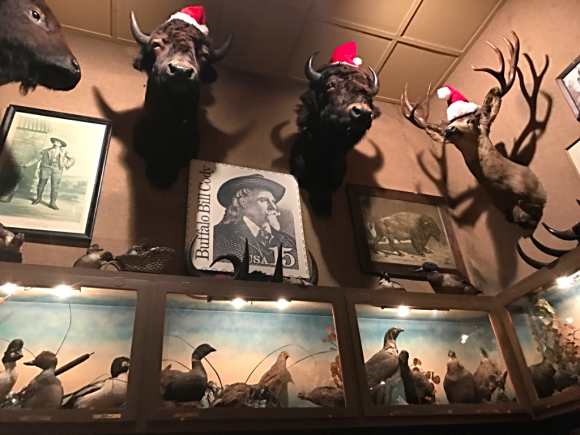 At 5AM the next morning, we headed out to the distillery and took our place in line. There were already hundreds of people there, in the very, very cold, near-pitch-dark line that wrapped all the way around the distillery then looped around the roads surrounding it.

The point of the trip was to experience this phenomena- the cultish devotion to the brand by locals (and a few people who came from pretty far away). The first person in line was there on Thursday afternoon for the Saturday morning event - and it turns out it's his thing to always be the first in line.

The previous nights the line already wrapped around the building- you can see a couple tents. 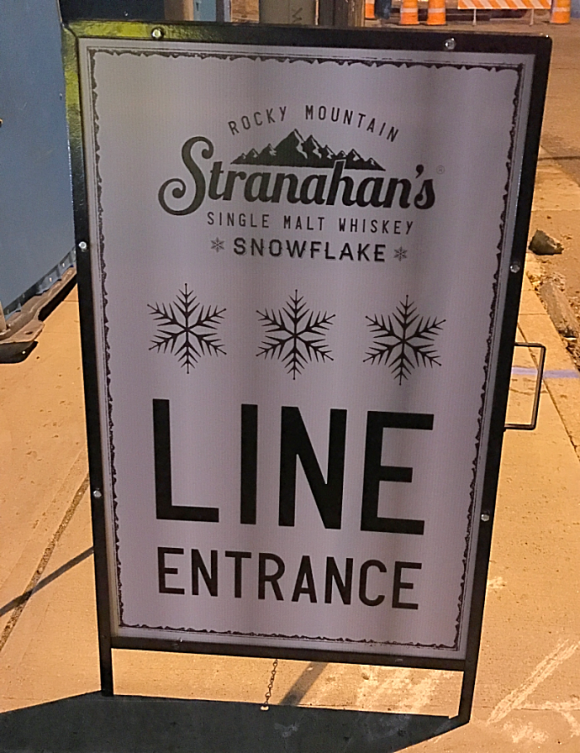 Most "StranaFans" were in small groups of four or so people, huddled together in lawn chairs wearing heavy winter clothing. Many were in sleeping bags, some had space heaters, there were some tents, a lot of people had been drinking, and I would expect that more than a few had partaken in the state's legal marijuana.  At five in the morning, though, most of the line was more mellow and sleepy/asleep than wild.

In our group, we had a small tent with a space heater in it, a little boom box, and people to grill up food for us.  It was as genteel as you could make it, but damn it was still cold! I had not expected to start drinking whiskey by 5:30AM, but umm, I needed it. By the time I'd get near the end of an ounce and a half or so of whiskey in my tin cup, both the liquid and the cup itself would be uncomfortably cold. (I was also hoping not to use the port-a-potty but after a lot of liquid I needed it, and had embraced my fate.) 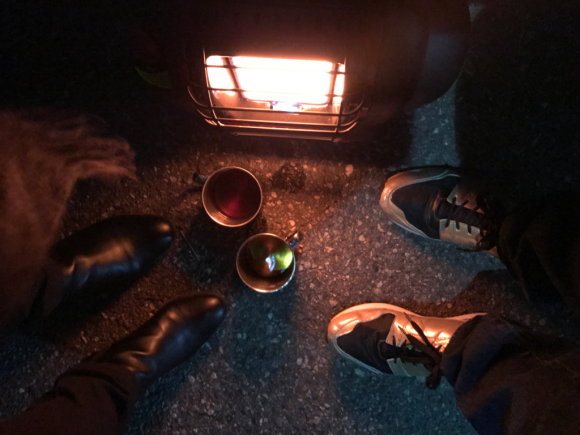 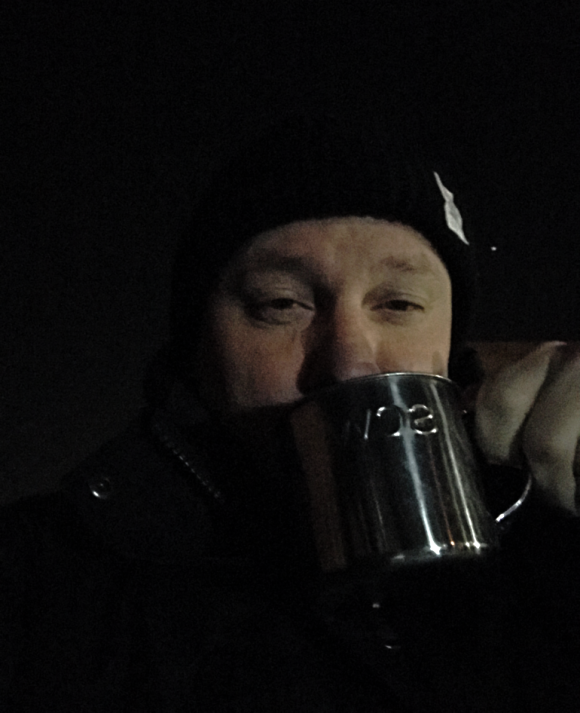 Soon enough though, the sun began rising and people started stirring. After a few drinks, our little place in line got a tiny bit loud. Others got up and started stamping their feet to shake off the cold. Eventually towards 7AM or so (forgive me for inaccurate timing reports, I had consumed a fair amount of whiskey at this point), then line started moving.

They handed out tickets for the number of bottles that people wanted to purchase (maximum of two), so that when it reached the point where no more bottles would be available, people would know they'd not bother getting in line.

The fast-motion videos below should give you an idea of just how long the line was.

They began letting people into the distillery, directing the line along probably the longest route through it so that people could warm up while waiting. They had entertainment inside including live bands, and everyone was in a jolly mood at that point. (Not that anyone was in a bad mood at any point... there was a lot of whiskey around.) 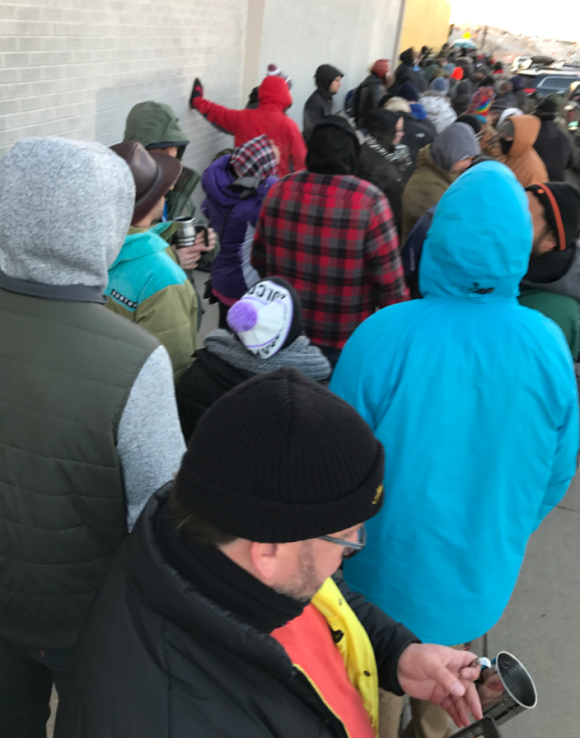 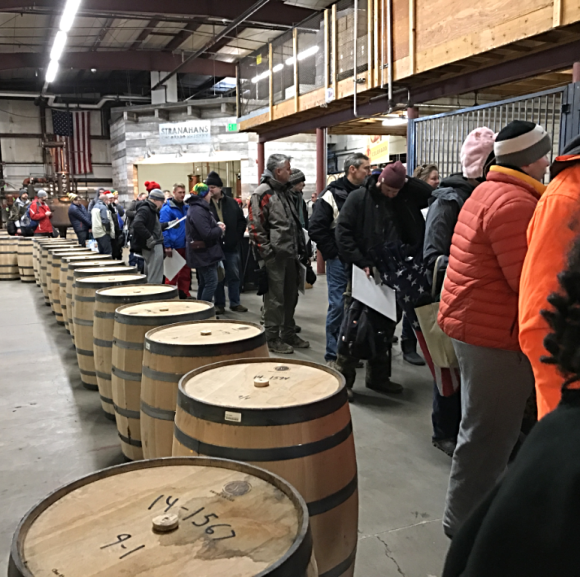 The line wriggled all the away around the warehouse and back to the front counter, we were able to purchase our bottles of whiskey and have them signed by distiller Rob Dietrich. 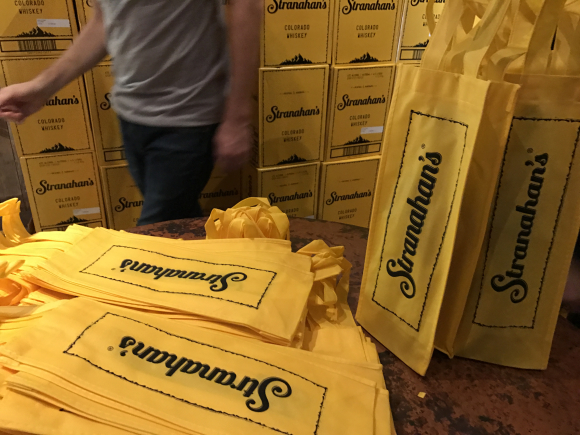 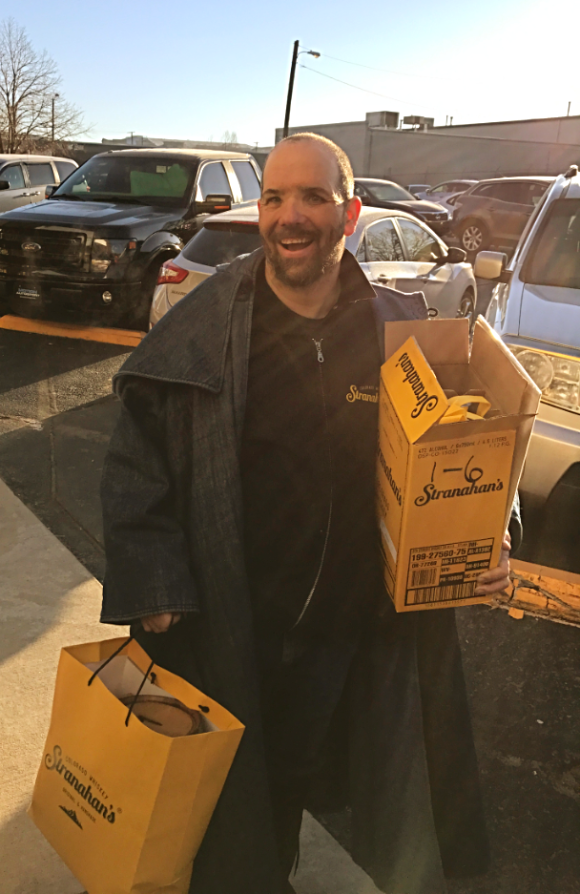 First guy in line I think, walking out with his bounty as we were getting to the front of the building.

Then, very tipsily, the group of journalists piled into some Ubers with our newly-aquired, hard-earned whiskey, and headed out to a much-needed breakfast. With discomfort, comes success! Each year Stranahan's Colorado single-malt releases a special Snowflake batch (no two are the same- get it?), named for one of the peaks of the Rocky Mountains.

The whiskey begins as Stranahan's Original (mostly two-year-old single malt with some 3- 4-, and 5- year mixed in) that is finished in a variety of casks. The press release notes, "Rob has chosen to celebrate Crestone Peak – Colorado’s seventh highest summit – by marrying the whiskeys from seven different barrels to create this edition of Snowflake."

The seven barrels in this year's single-malt blend are:

Read about how Stranahan's makes their whiskey with my distillery visit blog post here.

Would you sell your crestone peak poster by any chance?

Hi Tim - I looked for my poster but couldn't find it. If I locate it I'll reach out.

I purchased the poster at an estate sale in Orlando, FL this past weekend. I used the inter webs to research this whiskey and find out what the big deal was and why someone would want a signed poster. Came across this blog post - very interesting read! Thanks... maybe one day I’ll have to camp out for some.

Yeah it's a Whole Thing. It was cold and fun!