I Guess We'll Put Hops in Anything Now

Hops have long been used as preservatives and flavoring in beer, but recently the bitter, floral vine is making its way into spirits, cider, and now even canned wine.

It's been several years now since we the release of Charbay's Hop-Flavored Whiskeys, and increasingly whiskey makers are distilling bottle-ready beer with hops. I reported on that a year or so ago for Whisky Advocate. 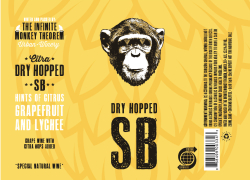 We've also seen other hopped spirits: I believe that Anchor's Hophead Vodka was the first, and since then several hopped gins have hit the market and at least one hopped rum.

But this week alone I saw hops moving into new categories (or at least new-to-me ones). It turns out that hopped cider isn't as new as I thought it was, as this round-up from 2012 proves. But I just learned of it. Maybe I should stick to cocktails.

Today I received a press release for hopped sauvignon blanc in a can from Infinite Monkey Theorem. (Talk about hitting multiple trends...). From the release:

Inspired by the incredible success of the Dry Hopped Pear Cider launched in 2015, IMT set off to create a harmonious collaboration of wine and beer. The Dry Hopped SB is made with Citra hops giving the product aromatic characteristics of grapefruit citrus, melon and tropical fruits like lychee and passion fruit. Combined with the beloved Sauvignon Blanc varietal, imbibers can expect a crisp, bright, acidic finish.

Hopped wine was new to me (and I wouldn't expect to enjoy it), but it turns out there are also a couple other brands of it on the market - just not in a can.

Ha! I usually order cider to AVOID any hops flavor... but I guess some people love it!

"Is it hoppy?" -me before ordering any beer these days. No like.