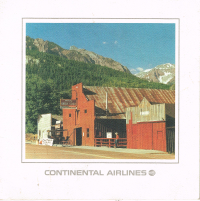 Alcademics reader Alan R. scanned in the drink menu from a Continental Airlines flight he took in 1980 to share.

He wrote, "The flight was from Auckland through Pago Pago; Honolulu to LA and return. This Menu was from the outward journey until we reached Honolulu. After that of course it was a domestic flight. I suspect that plane arrived in NZ from Australia, since the beers listed are mostly New Zealand or Australian - Michelob - Leopard - KB - and Fosters."

So let's analyze it: Looks not so different from many of today's menus at first: Bacardi, Beefeater, Smirnoff, Jack Daniel's, Dewars.

I'm not sure if Jack Daniel's is horribly mislabelled, or if there are two separate items - JD and a generic "Premium Kentucky Bourbon." I would suspect those are different items, making it 6 types of whiskey aboard one plane.

Looking at the Cocktails and Aperitifs section, it's interesting that they were still serving Dry Sack (sherry). And I'm dying to know if the cocktails they can mix - Martinis and Manhattan - actually had vermouth in them or if they were perhaps those old bottled cocktails from the 1960s.

And finally, notice that tonic water is just labelled as Quinine. Fun stuff. 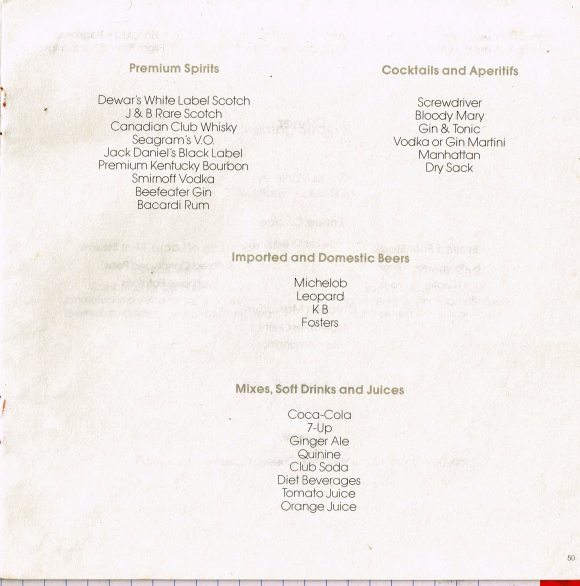 I was trying to remember the brand that did all the bottles cocktails of that era. Though it was "club" brand but couldn't find any evidence.

Jack daniels is not a bourbon but Tennessee whiskey.