Once again this year I attended the WSWA Convention, a convention for the nation's wine/spirits wholesalers (aka the distributors or the second tier of the three-tier system). The convention is a place for large wine/spirits brand owners to meet with all their distributors from around the country, and for smaller brands to try to pick up additional distribution.

The convention floor is filled with those brands looking for first-time or additional distribution into new states, so the products one tends to see are a mix of products in similar flavors/formats to current trends (there were ginger-flavored whiskies and mixers responding to the Moscow Mule craze as in previous years there were many cinnamon whiskies hoping to replicate the success of Fireball), along with entirely new unique offerings.

So, what's happening with spirits at the WSWA Convention? Here's my take:

Several brands tried to promote a high-tech or sciency aspect to their vodka brands. These include:

Green Day Vodka:  "Vodka Green Day is produced according the new technology “Eco Technology” ™, that’s why it has 2.5 times lower aldehydes’ and fusel oils’ content, than it is required by state standards. It means that the buyers will have the good health after drinking!"

Bellion Vodka: "Bellion was developed using a proprietary blend of FDA approved ingredients called NTX. Spirits infused with NTX are made smarter without sacrificing the consumer experience. NTX is a technology that is integrated into spirits during the manufacturing process and is thus not able to be a standalone ingredient. Bellion Spirits, LLC is the exclusive outlet for products created with NTX Technology. Currently, NTX is only available in Bellion."

Chilled Dills Pickled Flavor Vodka: Had a pretty easy take on this, with a big sign saying, "ask about our ultrasonic infusion process."  For those nerds who want to know what that process is, it's Terra-Pure.

Deep Blue Russian Vodka: "Russian Ice Filtered Vodka" "GOVERNMENT STANDARDS FOR VODKA PRODUCTION IN RUSSIA ARE ONE OF THE MOST, IF NOT THE MOST STRINGENT IN THE WORLD. THE ESTABLISHED LIMITS FOR ALDEHYDES, ESTERS, AND FUSEL OILS ARE SET VERY LOW. DEEP BLUE RUSSIAN VODKAS ICE FILTRATION PROCESS MAINTAINS A LOW TEMPERATURE THROUGHOUT THE PROCESS AND YIELDS LEVELS OVER 60% BELOW THESE RIGID STANDARDS. THE RESULT IS A PURE AND SMOOTH VODKA, IDEAL FOR TODAY'S DISCERNING CONSUMERS." Never before have I seen spirits marketed so specifically to Millennials. In fact, the first work in HOLLA vodka's promo is "Millennial." 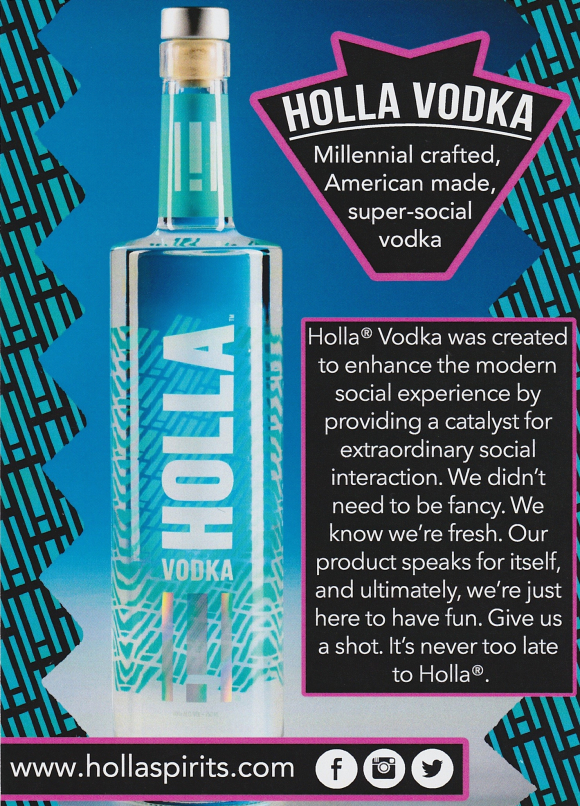 YOLO Rum, on the other hand, has a much less wild packaging (and website), but the marketing on-site at the convention made it super clear for whom this rum tolls. 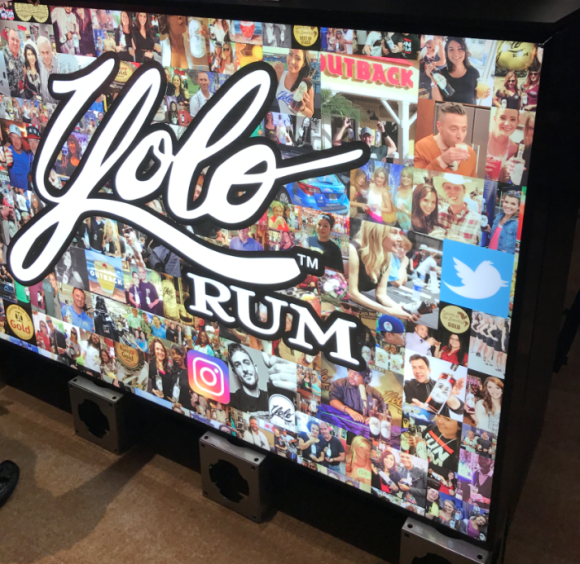 Another brand on site, John Drew Brands, is branching out from a cigar business to a hip-hop focussed bold promotion of three new products: a rye whiskey, a rum, and a blend of rum and bourbon in one bottle. They had a DJ, live graffiti painting, and basically their booth looked like a cool sneaker store. 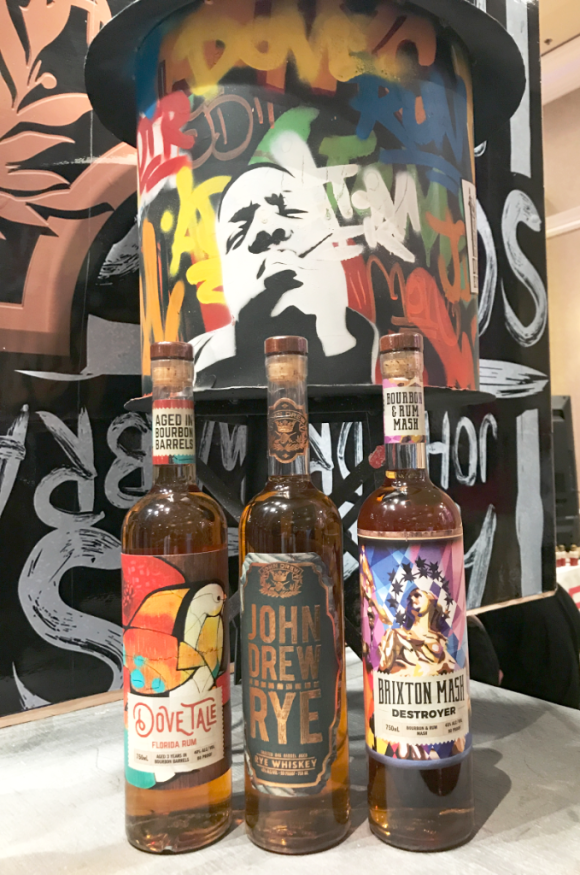 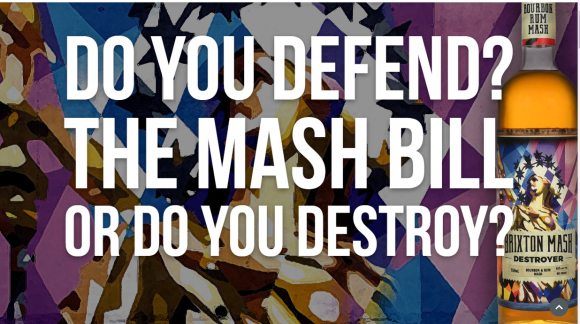 The snobs among us may scoff at the above John Drew Brands' bourbon/rum hybrid, or Vodquila (and now its spin-off Rumquila), but I think the industry is moving towards hybrids faster than everyone thinks.

My theory is that with all the barrel finishing used in the rum, tequila, cognac, and whiskey (and now sometimes vodka and gin)  categories, we're putting it into people's minds that you can have wine and whiskey, and rum and beer, and cognac and bourbon together in a product.

Someone asked a question on the trends panel I spoke on about hybrid spirits and that got me to thinking that we'll see a whole lot more of these rather than less.

I've not seen spirits in a box that I can think of in the USA, though on Martinique you can get 3- and 5-liter bag-in-boxes of rhum agricole. I'm not sure if they're the first [note from the comments - Fireball beat 'em to it], but a company called Famous Brands now offers Weekend Warrior vodka (in two packages - one flag-adorned and the other camouflaged so I guess you can take it along duck hunting) and an American whiskey. These are in 1.75 liter boxes.

The back of the box illustrates that you can just pop the box open and fill it with ice to chill it down. Smart. 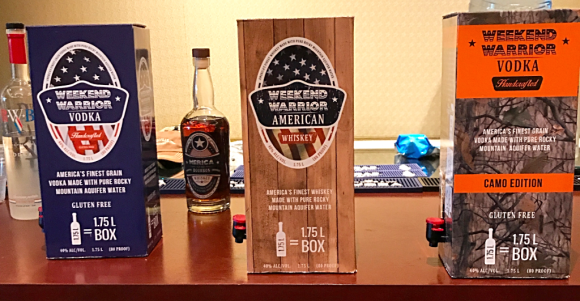 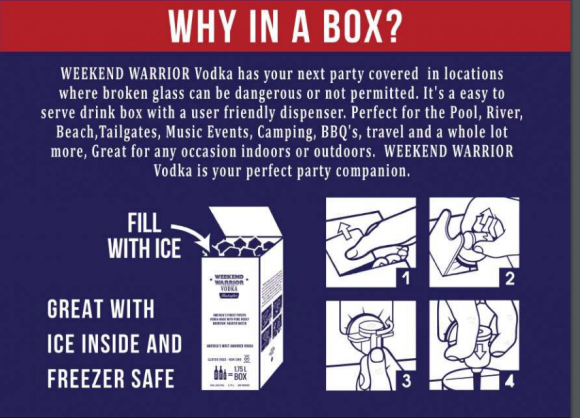 I wouldn't exactly call that a trend, but I call it awesome. I wish major brands would come out with bag-in-box versions of their spirits to save on glass shipping weight.

Anyway, that's my trend report from this year's Wine and Spirits of America convention. Hope to see you again next year.

Innovation Leader Fireball Whisky has been available in a box since last year, it's actually two 1.75L bags inside a box to get around packaging size limits I think. NTX Technology is astounding for using so many words to say absolutely nothing.

I've not had the pleasure of drinking Fireball from a double-wide box yet! It's good to have goals.