I'm continually researching topics related to bugs and booze, and went looking for some better information on how scotch whisky sales were affected by the phylloxera plague that took down most of Europe's vines in the late 1800s.

Many sources cite that scotch whisky sales really took off in the same time period as phylloxera killed the wine biz as people switched to spirits, and I was looking for more solid information on that: sales numbers, etc.

I've found that it's true there was a huge scotch boom in this period (30+ new distilleries opened between 1880-1900), but I was seeking more information.

Anyway, my office is located above the spectacular Mechanics Institute Library, a membership library dating back to 1854. I have plenty of whisky books in my office, but the library itself has some unique books I've not seen elsewhere. I went to see what I could learn.

I happened across a book called The Whiskies of Scotland by RJS Mc Dowall from 1967. It didn't have any information on phylloxera except for this one fun fact about the Gilbey's wine/gin company: they saw phylloxera happening so invested in scotch whisky. Smart. 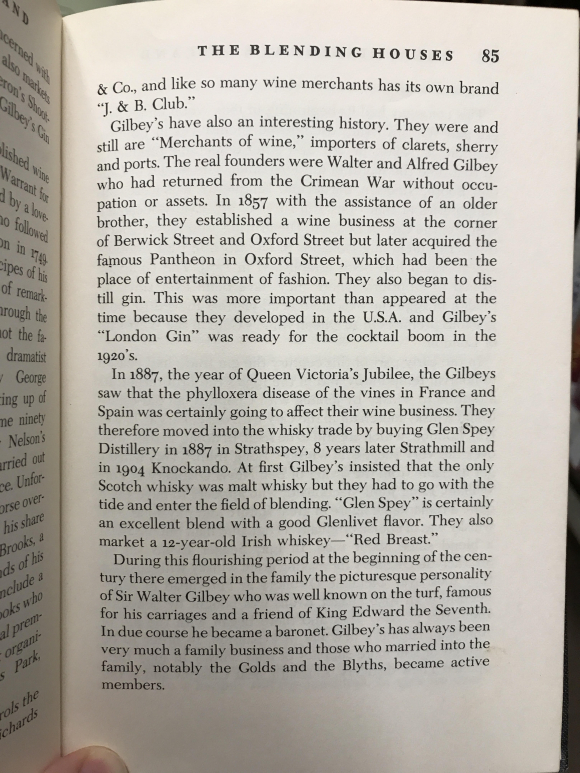 I wonder what the label of Gilbey's 1967 'Red Breast' Irish whiskey looked like! I did find this snippet: "Redbreast was a brand name for Jameson's pure Irish pot still, bottled in bond by Gilbeys. First made in 1939 with Jameson filling Gilbey's own casks. Two sherry casks were used for each bourbon cask. The brand died off with the closure of Jamesons distillery but was recently relaunched..."

Easier to find than I thought: http://www.celticwhiskeyshop.com/redbreast-12-year-old-gilbeys-12-bottle

Ugh I know the history is so tempting - you could trace today's brands all the way back. Must..not..lose..focus...