Campari is Made Differently Around the World: Cochineal, Coloring, ABV, & Eggs

I was researching a few different topics and stumbled upon an interesting observation: Not only is Campari sold at a wide-ranging variation of alcohol percentage in different countries, the coloring used to make its signature red is different depending on the country.

As many people know, Campari was traditionally colored with cochineal, a scale insect native to South America that grows on the prickly pear cactus. (Cochineal is still used in many products today, as it is a natural coloring and doesn't need to be labelled as the unsightly 'artificial coloring'.)

In 2006 cochineal was discontinued - but as it turns out, not everywhere. In the United States and it seems most countries, Campari now uses artificial coloring. Depending on which country one is located in, that coloring must be declared in different ways, so what is merely "artificially colored" in the US is labelled as three specific coloring agents in one country, and none at all in others.

But in at least one country, cochineal is still used.

In the United States, Campari is sold at 24% ABV and the coloring is listed as "artificially colored." 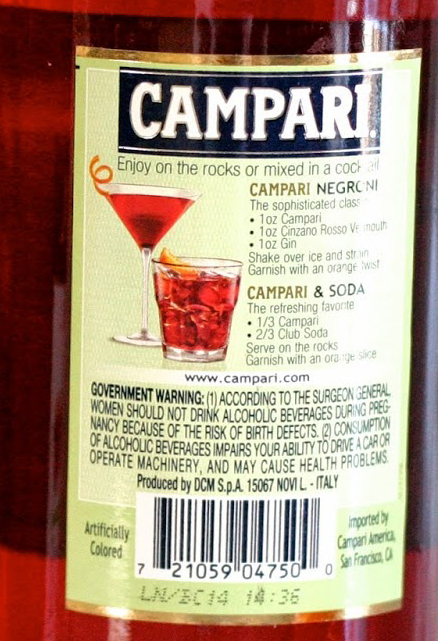 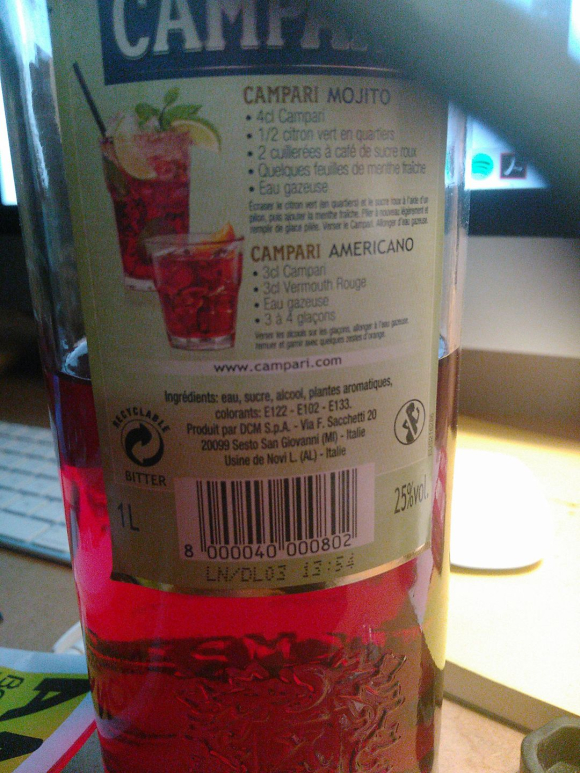 Next door in Spain, no special colors are labelled, but it's also sold at 25% ABV. 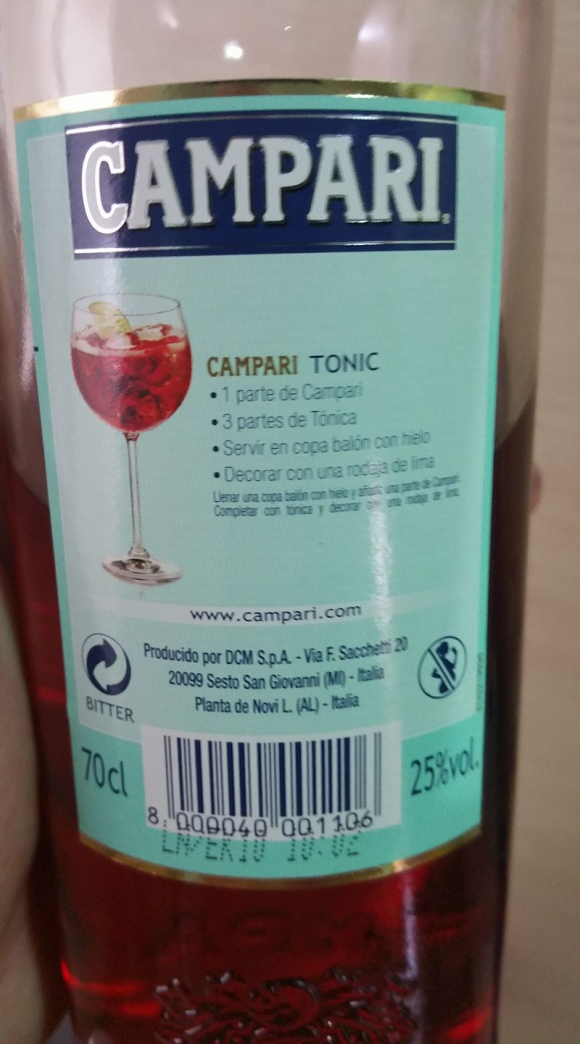 It appears it is the same in Argentina (with INS instead of E numbers), but the proof is 28.5%. 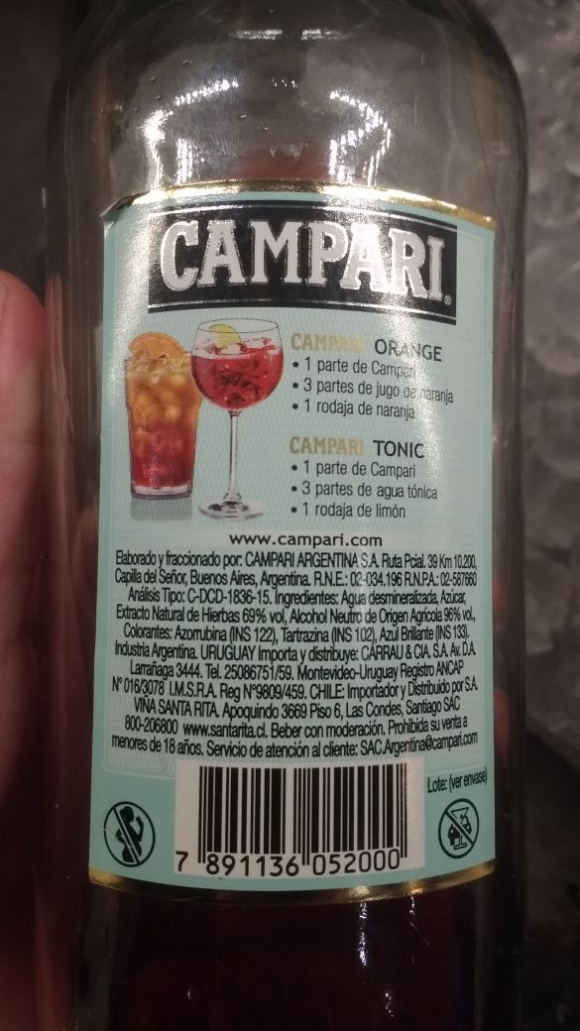 In Brazil it is the same, and labelled gluten-free. 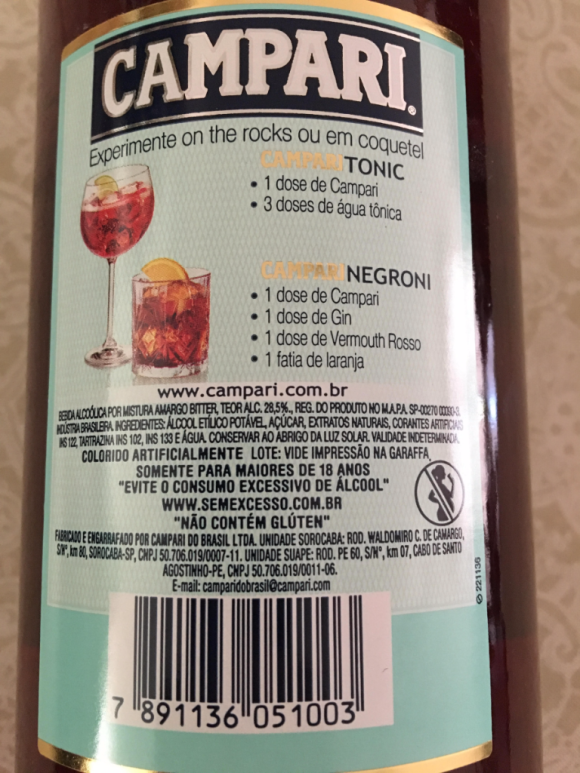 In Toronto, it is sold at 25% and the color is merely misspelled (kidding!) as "colour." 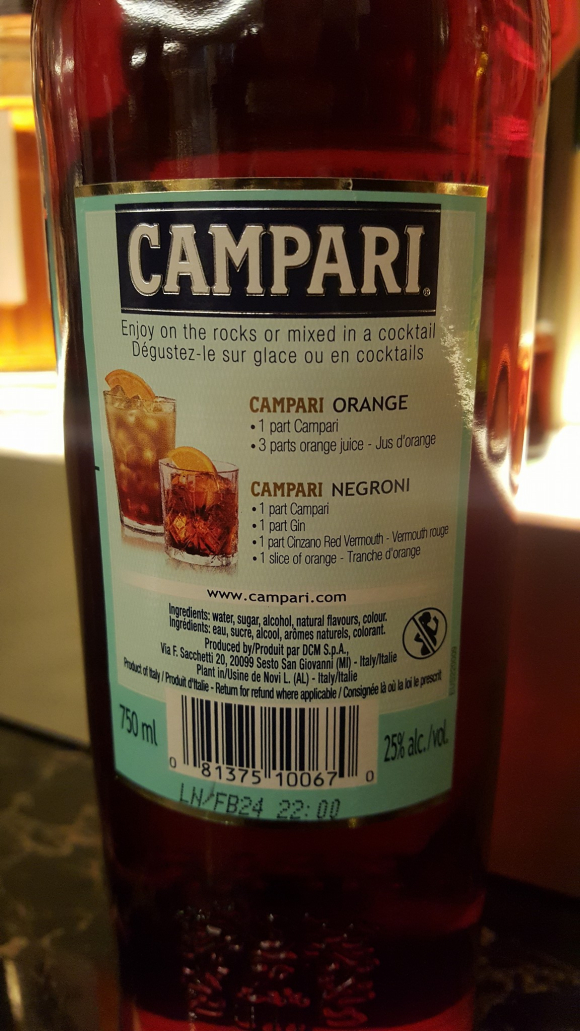 In Australia, it is sold at 25% with no special color labelling. 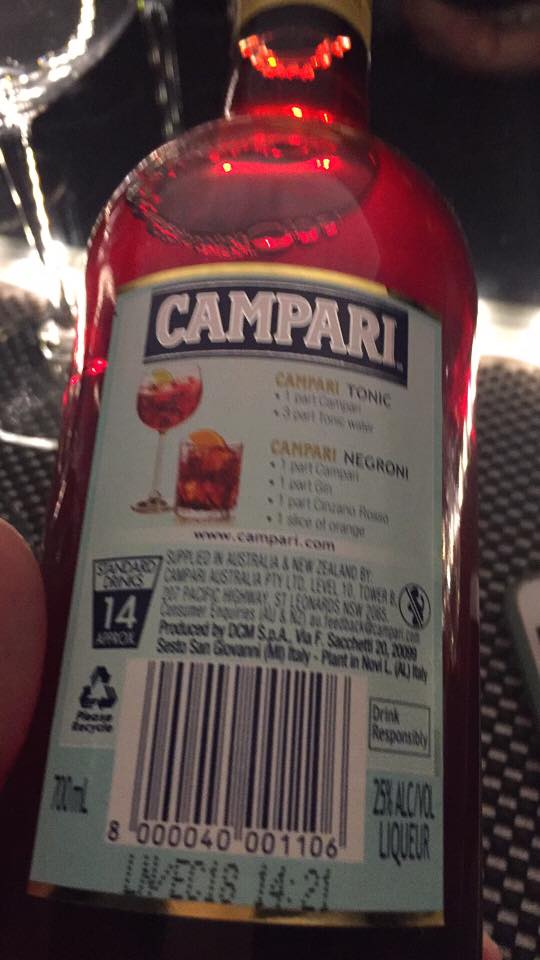 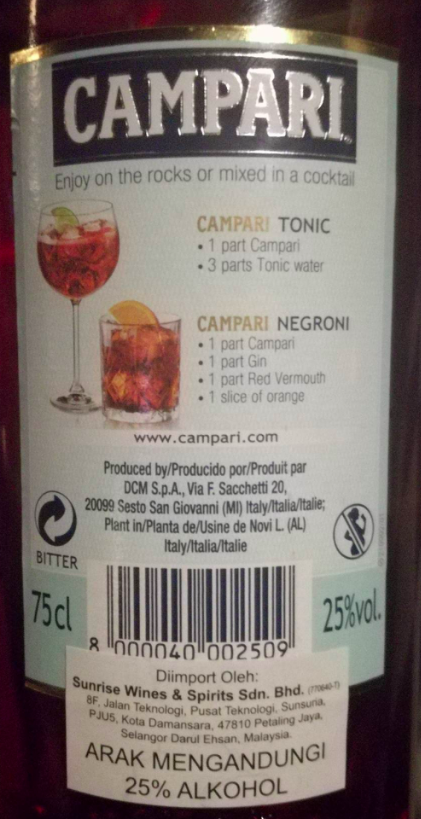 In Japan, it appears to be sold at 25%. Anyone ready Japanese and can tell me if it says anything about coloring or eggs? 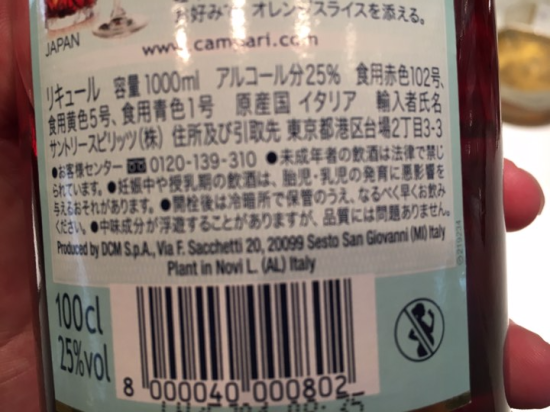 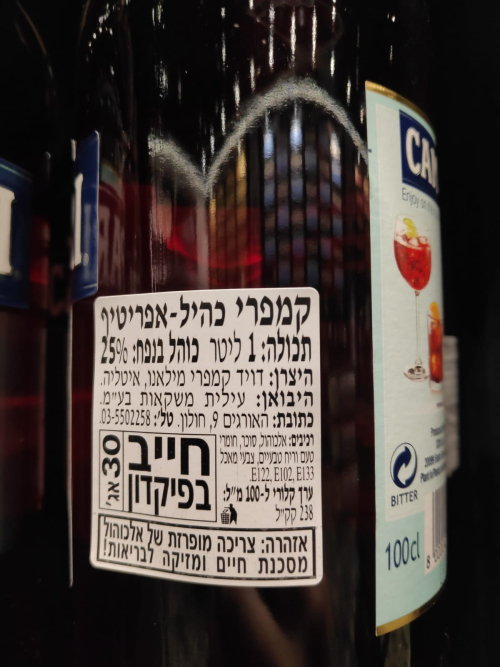 In Iceland, it's sold at 21% ABV with no special color labelling. 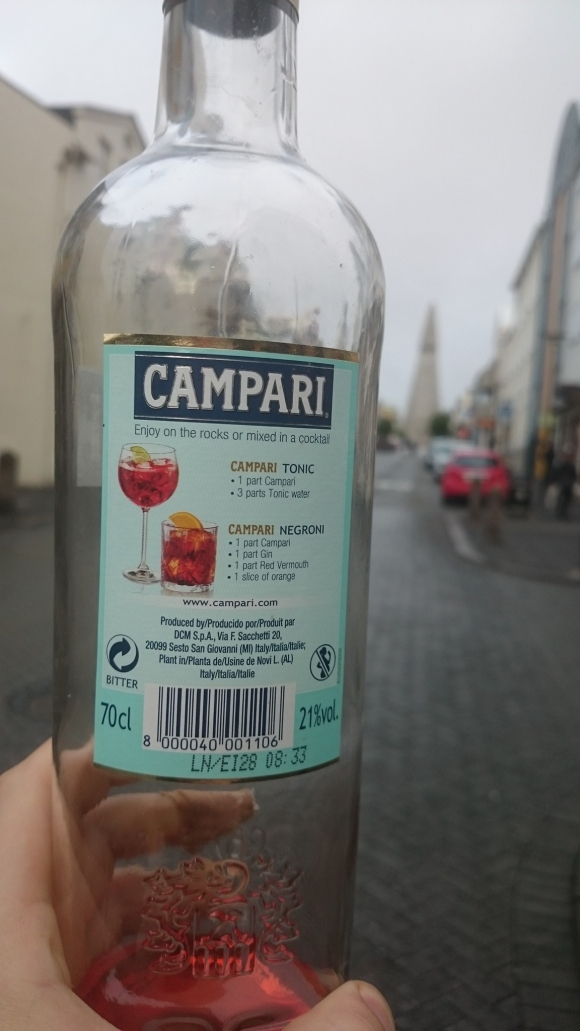 Now here's where it gets really interesting.

I was wondering if the Swedish government website was merely out of date as it lists the coloring as E120 - that's cochineal(!), but a friend just picked up a bottle recently and cochineal is still in Campari in Sweden. Additionally, it is sold at 21% ABV. 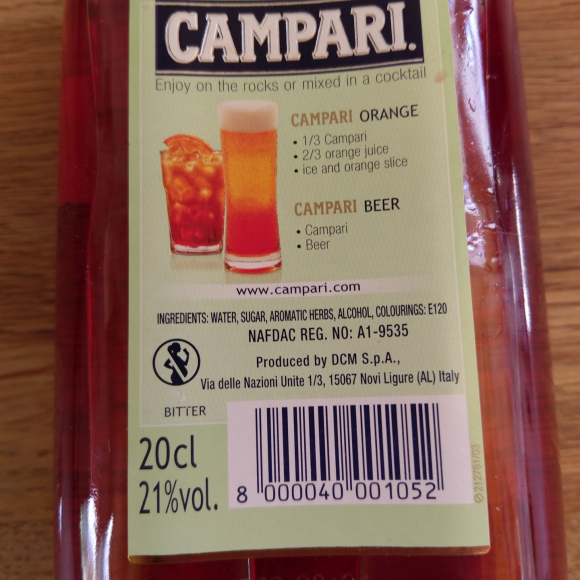 Update: A twitterer sent me a pic of bottles from Mexico - they also have cochineal! See the E120: 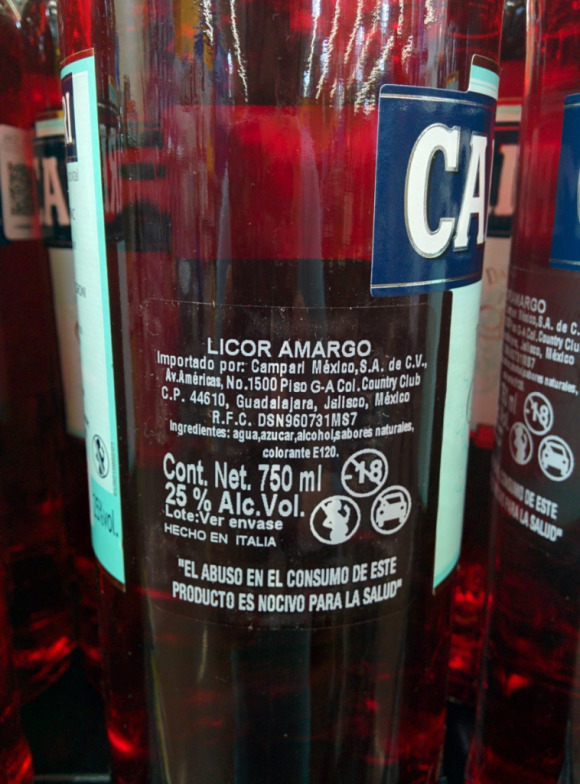 And even more interesting is this bottle of Campari from Jamaica. Hold onto your butts: 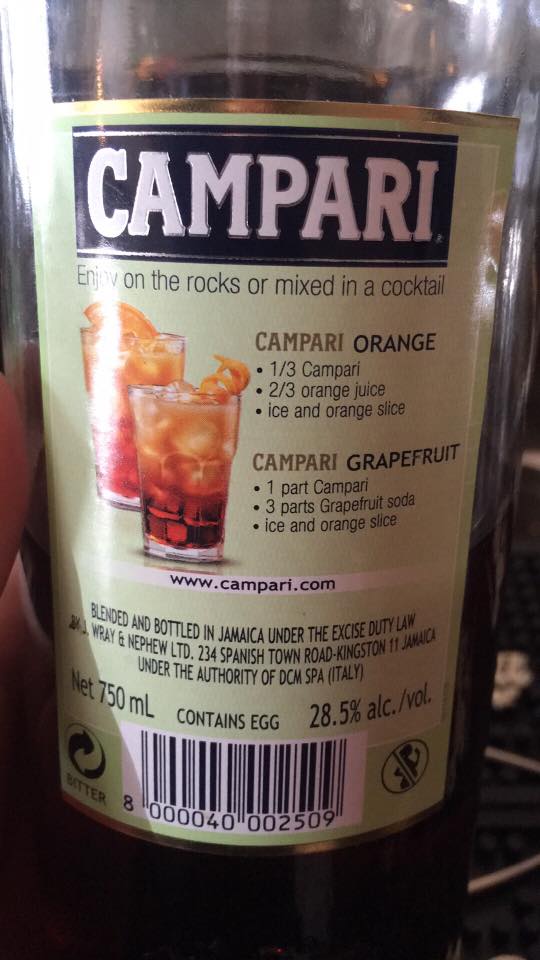 CONTAINS EGG. Folks, that is some interesting news right there. Typically when eggs are used in wine, beer, and spirits (that aren't egg-based liqueurs), the eggs have been used in the fining process that helps filter the products to clarity. I think it's fair to assume this is how eggs are used in Campari.

My guess would be that because Jamaica has a Rastafarian community, many of which are vegans, products fined with eggs are required to be labelled.

What this means though, is that even though they took out the cochineal insect coloring (except in Sweden and Mexico apparently), Campari, at least in Jamaica, is still not vegan.

The question remains what it is in the rest of the world - I would bet that Campari is still not vegan.

Keep in mind that much cane sugar is whitened using bone charcoal, so any liqueur or sweetened alcohol has an okay chance of being non-vegan.

Thank you to my Facebook and Twitter friends from around the world who shared their bottle images. If you live in another country not mentioned here, please send me your bottle image to add to this discussion. Thanks!

I feel sad for your Icelandic reader whose bottle is nearly empty.

Seeing the 70cl/700ml labels brings me back to the year I spent in Oslo. After getting over the shock of a bottle costing twice as much as back home, it was another twist of the knife when I saw that it had less inside to boot. There were very few cocktails that year.

I truly appreciate that you put this thread together. The internet is such a gold mine of obscure things that are really helpful. I just returned from Jamaica where I was determined to try the Campari solely because of this post. I can update you that Jamaican Campari no longer says "contains egg" on the label. Not sure if they changed anything. BUT I can tell you that in addition to the stronger 28.5% alcohol, they must be tinkering with the formula to appeal to local taste because it is much more herbaceous and strong flavored. I was taken aback and delighted and wish this were Campari everywhere. My drink at home tastes like campari-flavored kool-aid now.

Thanks for following up - this is very interesting. It makes me wonder with the label and possibly flavor profile change if the Jamaican version is no longer fined with egg (as opposed to no longer being labelled as such), since it's registering as more herbaceous. That would be a true find!

I recently bought a bottle of the Jamaican blend and it is wonderful very herbaceous. I have it after dinner and it takes the edge off the day.
Truly a great fine

How about in Italia? I know the alcohol is 25% but what about the coloring? Grazie...

I, too, would like to learn where you purchased the Jamaican blend of Campari!

I’ve recently become hooked on the Negroni and drink 4-5 a week. I also add a splash of Campari to club soda much more often. Is the red coloring used in the US safe in the quantity I’m consuming? Would the Swedish version with E120 be better for me?

HI - Don't worry, the food coloring is approved for safety whether it is artificial or made from bugs! Chances are we consume more artificial coloring in candy and other foods than in Campari.

Agree. Enjoyed the extra about eggs. Denmark not mentioned. Could be same as Sweden or Iceland.

I always boasted that I never got drunk from drinking Campari with loads of ice. Yesterday evening proved me wrong. I just love Campari but not aware it was actually 25% alcohol. I presumed i was only 10%

The Campari sold in Denmark is imported from Italy. Must be the real thing and not on franchise?

We use Italian Campari, here in Canada, probably because of a large Italian community locally.
It just declares color, non specific and it is 25%

That's funny, I'm going to use that line in the future, gee I'm sorry dear, I thought that Rum was only 15% lol

You seem to know much more about Campari than most. The underlying question that lead me to your post: What is the alcohol derived from? Everything says it’s composition is herbs and fruits infused with alcohol but never saying what the alcohol is made from. Any ideas? Dean

Hi Dean - Come to think of it, I do not know for sure. Most Italian spirits are based on wheat or sugar beet spirit. Particularly the liqueurs seem to be sugar beet-based so that is my first guess.

Campari made in Jamaica is sold across the entire Caribbean region.
The 28% variety.

This is really useful info, thank you so much for putting this post together! Like Mr. Neiswender, to me American Campari tastes like vaguely boozy Kool-Aid and I'm not a fan, so I'm hunting for a version closer to the original recipe, at least pre-2006 if not from decades back when quality was more important than manufacturing volumes for world export. I'm intrigued to try the Jamaican stuff, if I can manage to get my hands on a bottle of that, but getting some from Mexico may be simpler for us West Coast USA denizens. Glad to know there are still some places where it's made with cochineal instead of coal-tar derivatives (the "artificial" source of your "artificial color"...but hey, supposedly it's safe in small quantities!)

So what does the Compari from Milano Italy colored with? I’m allergic to red dye, so I’m curious.

The mexican ia made in Italy. Hecho en Italia

The swedish Also ia made in Italy.

The Campari sold in Iceland Also Ismael in Italy.
Just read the Labels!!!

@Julio - A better way of putting it would have been "Campari is sold in different formulations around the world" - it could be all made (or just the flavoring minus the sugar and/or alcohol) in Italy but it's made with different colorings and ABVs depending on the country in which its sold.

Please tell me the Campari sold in the US does not contain High-Fructose Corn Syrup instead of regular cane sugar.