The Impact of Phylloxera on Absinthe 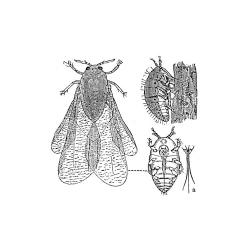 I'm giving a talk at Tales of the Cocktail on "Bugs and Booze," and in reading up on the vine-killing aphid phylloxera, I came across a point of history I didn't understand.

Phylloxera devastated the French (and eventually the world's) wine industry from the 1860s to around 1900. Most absinthe was made with a base of brandy- distilled wine- so it too should have been affected by phylloxera and been less available.

But if that was the case, then why did absinthe sales supposedly soar during phylloxera, and why did the wine industry feel the need to launch a negative PR campaign against drinking absinthe when it recovered? (This PR campaign was successful in getting absinthe banned in France and other countries for nearly 100 years.)

So I posted a question to my smart friends on Facebook:

Absinthe nerds: We always hear that post-phylloxera the recovering wine industry did a negative PR campaign on absinthe so that wine could resume its place on the throne. But wasn't most absinthe originally made with a wine/brandy base? When did it switch to a grain base (if it really did) - during or previous to phylloxera? Does anyone have historical data on this?

I'll break down my understanding of it. You'll note that I'm not citing any sources here so it's up to you to fact-check, but this is what I got from listening to absinthe history experts:

The Base Spirit of Absinthe Changed Due to Phylloxera

Absinthe can be made with any base spirit. Legal regulations were proposed in France that certain quality marques of absinthe (such as "Absinthe Superieure") need to contain grape distillate as the base, but these were never put into law as far as I know. (One source said the wine lobby actually worked to block any quality markers for absinthe.)

Not all absinthes were made with a grape-based distillate (but marc/grape was considered the best); and absinthe in general had a problem with low-quality (or even poisonous) brands with additives masquerading as the good stuff.

Sugar beet spirit became a predominant base spirit not only in absinthe, but in most French liqueurs. This is due only in part to the absence of grape spirit during phylloxera: Napoleon had launched a massive campaign to plant sugar beets in France to be more self-reliant. From a post I wrote in my project studying sugar: "Napoleon, due to the economic and real war with England, bet big on sugar beets. In 1811 he supported vast increase in sugar beet production. Within 2 years they built 334 factories and produced 35,000 tons of sugar."

Additionally, column distillation came along in the 1830s, which made it easier to get a high-proof, nearly-neutral spirit from most any base material. So in addition to sugar beets, things like potatoes and grain were used as a base for absinthe.

So there were many reasons that the base of most absinthes changed to sugar beet or grain during phylloxera. Pernod Absinthe's quality selling point was that it never changed its base.

Sales of Absinthe Soared in the Age of Phylloxera

True, from pretty much all accounts. Sales of absinthe were increasing before phylloxera, but absinthe's low price and wide availability during the crisis further helped sales. Then after absinthe was banned, sales obviously dropped a bit. So the 30 year period of phylloxera in France coincided with the glory days of absinthe. This is the heart of the Belle Epoque 1871-1914.

But certainly the low-quality (and low-priced) absinthes on the market, which surely became of even lower quality during phylloxera when there was less wine to go around, were a problem, and gave anyone who was opposed to absinthe a target. As some people commented, now even the lower classes were drinking absinthe, for shame!

When the wine industry recovered fully or in part, they wanted all their sales back so they engaged in/funded negative PR campaigns about how dangerous absinthe was. These campaigns helped get absinthe banned after 1900 in many parts of the world.

Well, that's a short version of a very long and interesting discussion. I hope I've done it justice.