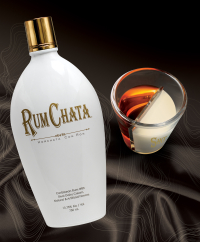 RumChata has introduced a unique, fast and easy way to mix its award winning, one-of-a-kind flavor with anything. The Shot-A-Chata shot glass is split into two chambers allowing consumers to combine the great taste of RumChata with any other spirit or beer. In the past many products may have caused separation when mixed prior to drinking due to the cream base of RumChata. The specially designed 1.5 oz. branded shot glass keeps the liquids apart prior to drinking so that they can be enjoyed together without separation. The glass is now available nationally for on-premise use.

“RumChata fans have been trying to make Coke floats with RumChata for years. Recently, people have really liked the taste of RumChata and apple whiskey together. However, both those mixtures would result in separation due to our dairy base. Not anymore. RumChata Coke float shooters, apple whiskey a la mode, we call that a Pie Hard, —any combo is possible now in the new Shot-A-Chata shot glass,” said Tom Maas, RumChata Founder and Master Blender. “Consumers get a great tasting shot while the account can profit more on each serve by pouring two great tasting brands in one glass.”