What is a Blended Straight Bourbon Whiskey? 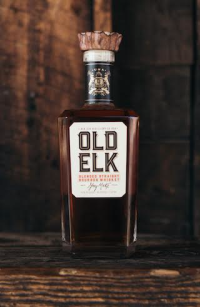 I was about to casually add a product to the New Booze page when I realized I didn't know what it was: Old Elk Blended Straight Bourbon Whiskey.

I thought that "blended" and "straight" whiskey were at odds with each other, as blended whiskeys must contain at least 20% straight whiskeys in their blend.

The press release doesn't address what is a blended straight bourbon is in the description:

“We use traditional ingredients - malted barley, corn and rye - in an innovative, yet steadfast recipe to create a bourbon with smooth, rich flavors that act in harmony with caramel cues brought out by the charred barrels and spicy rye notes,” said Greg Metze, Master Distiller at Old Elk Distillery. “After testing a variety of proofing periods, we found that these flavors come together in a smoother bourbon when the proofing stages are longer. Instead of taking the usual 24 to 48 hours for proofing, we use a slow cut proofing process during which full-barrel proof bourbon is cut and left to rest - and we repeat this patient technique until the ideal character is achieved. It takes significantly longer than most common recipes, but taking the time to proof slowly makes all the difference.”

So I looked it up.

According to the US Government:

Update: A PR representative for the brand clarified that although Old Elk could legally use additives in its formulation according to the whiskey category it is in, they do not. They wrote:

Old Elk Bourbon does not use additives, but still falls under the “Straight Bourbon Whiskey” designation since the bourbon whiskies used in the blend were produced in three different states (Colorado, New York and Indiana). They do plan to change that, as they’re expanding their distillery in Colorado.

Which in the end means it isn’t looking to garner awards, but rather sell at a price point for people who really don’t care what kind of whiskey they buy

Didn't think the word "bourbon" could appear on a bottle of anything containing coloring or flavoring in the US.

Only if it's unqualified. There is "bourbon," "straight bourbon," and things like "bourbon aged in a chardonnay cask," etc.

Well that's clear as mud. That said, if Greg Metze is doing it, I bet it's delicious. For my money he's the most under
appreciated whiskey distiller around.