Directional Freezing, Freeze Distillation, and an 1890 Story About Ice Purity

Ice nerds will recall that directional freezing is a method for making clear ice by forcing the water to freeze in one direction, rather than from the outside-in as in a typical ice cube tray.

It's also pretty similar to, if not the same thing as, freeze distillation  - using freezing to separate liquids. Freeze distillation is the method by which early American applejack was made: take a cider and freeze it, scoop off the frozen ice, and then you have a more concentrated cider, higher in alcohol. Keep doing this and eventually you get something pretty high proof.

This was also the process used by BrewDog to make their high-proof Tactical Nuclear Penguin beer.

Experimenting with directional freezing shows that when using the process, the clear ice freezes first and the air and any minerals in the water are treated as impurities, pushed away from the point of freezing. But as many people have found out, it treats everything not pure water in the same way - when you try to add food coloring or a flavoring to the cooler in a directional freezing system, unless you put a ton of it in the color is treated as an impurity and your ice still comes out clear. (The bottom/last part to freeze will be gooped up with the color/flavor. )

Jim Blakey of the ClearlyFrozen ice cube tray found a story in JAMA, the Journal of the American Medical Association, that talks about how clear ice less polluted than the lake water from which its formed. I'd assume this is for the same reason.

“clear ice from polluted sources may contain so small a percentage of the impurities of the source, that it may not be regarded as injurious to the health." 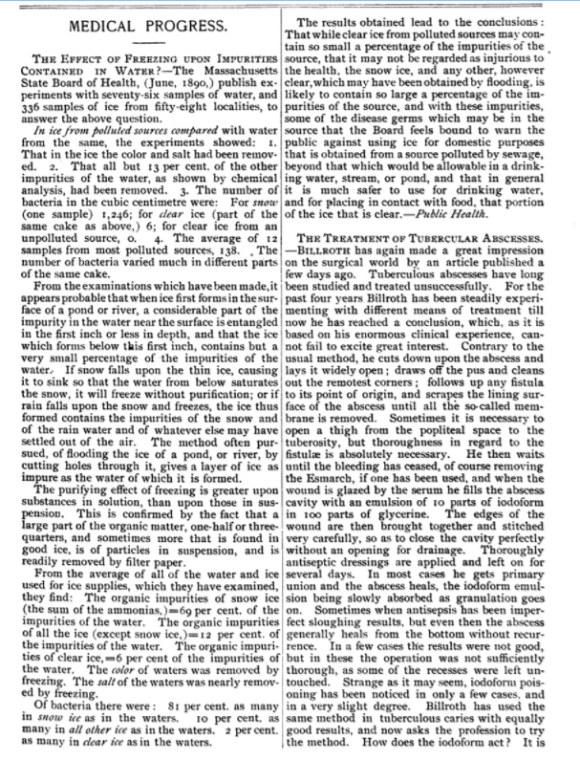 The original reference in Google Books is here.