Barra México returns to Mexico City for its fourth and largest show
— Save the Date: June 10-11 at the CENTRO CITIBANAMEX — 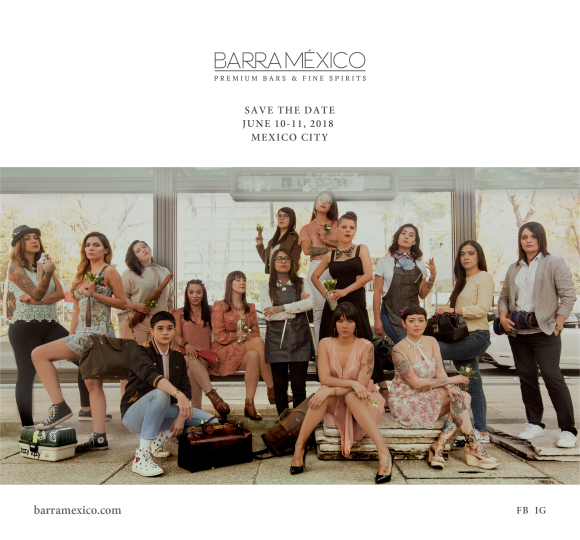 In 2017, Barra Mexico attracted nearly 4,000 people from 41 countries. Attendance in 2018 is easily expected to exceed those numbers. Recognized as one of the world’s best places to experience multicultural, cosmopolitan cocktail culture, Mexico City boasts three of the World’s 100 Best Bars (Limantour at number 14, Fifty Mils Bar at number 61 and Hanky Panky at number 75). With Mexican haute cuisine trending on the world stage, Mexico City also has two of the World’s 50 Best Restaurants (Pujol at number 20 and Quintonil at number 22). Kitchens are influencing the Mexican mixology industry as many ingredients used in traditional and ancestral dishes are being applied by bartenders in Mexico City.
Mexico is the 11th largest spirits producer in the world and the origin of rare and important internationally-prized spirits including Tequila, Mezcal, Sotol, Bacanora, Charanda and Rum as well as regional spirits like Raicilla and Pox. Mexico is the largest beer exporter in the world, accounting for 21.2 percent of total exports and $2.8 billion in sales.

In 2018, the Bacardi Legacy Global Final Competition will take place in Mexico City in May. Mexico City has also been named the World Design Capital of 2018, the first city from the Americas to receive this designation as a model for other megacities around the world using design to tackle the challenges of urbanization and achieve a more livable city.

Barra México Co-Founder Paula García says: “Barra México is a gateway for international spirits brands that want to enter the Latin American market. This show provides brand owners, distributors and wholesalers with the opportunity to either begin, expand or consolidate their presence in Mexico and the wider Latin America region. This part of the world continues to make waves in the industry with leading bars and restaurants claiming their spot on the world’s best lists, making it a region to watch. We are looking forward to another exciting year and offering both exhibitors and delegates the opportunities they need to grow their business.”

Ara Carvallo is an international consultant, professional speaker and co-founder of Barra México, The Latin American Trade Show for Fine Spirits. She has 18 years’ experience in the international spirits industry. Ara worked for 10 years at Lucas Bols, the oldest distilled spirits company in the world, based in Amsterdam where she held different positions working the last four years as Global Brand Manager responsible for the international premium portfolio and global bartending programs. Ara currently lives between Mexico City and Amsterdam and consults for spirits brands, mainly helping them to find distributors in Latin America and Europe and reach out to bartenders globally. Ara also runs Difford’s Guide Mexico.

Paula García, co-founder Barra México is a lawyer and sommelier, who graduated from Escuela Argentina de Sommeliers en Mendoza, Argentina. With more than six years’ experience in the spirits industry, Paula spent several years in New Zealand and Argentina working on different wine projects. In 2012 she moved back to Mexico City to join La Europea, one of the most important spirits retailers in Mexico, as spirits and mixology brand manager. Paula has led different projects such as PorQué Mezcal and the first Mezcal Fair. She has also been on the organization committee of different gin, vodka and mezcal fairs.