Bitter Ingredient Flavors and Use from Martini Vermouth Masters 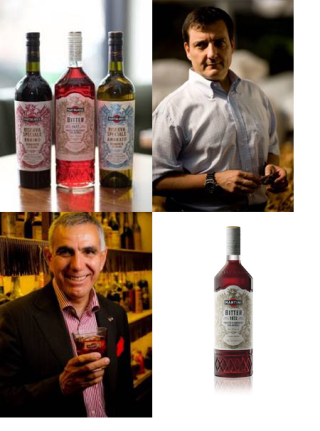 At this year's Bar Convent Brooklyn, I had the opportunity to sit down with Ivano Tonutti, Master Herbalist for Martini & Rossi (and Bacardi products generally) and Giuseppe "Beppe" Musso, Master Blender of Martini & Rossi.

The timing was excellent, as I am preparing to give a talk on bitter ingredients for Tales of the Cocktail, and they were in town promoting the newish Martini & Rossi Riserva Speciale Bitter Liqueur.

The Bitter is part of the new premium Riserva line, along with Rubino (red) and Ambratto (white) vermouths. We spoke primarily about the new Bitter and and plants used in the Riserva line; but in some cases we were generalizing beyond that. So please consider this general information rather than super specific to any one product.

This may all seem like random stuff to you, but it was extremely helpful for the talk I'm preparing!

For those of you new to these products, here's the basic info from the brand:

The small parcels for full-bodied Langhe DOC Nebbiolo wines used to create MARTINI & ROSSI RISERVA SPECIALE RUBINO are blended with extracts of Italian Holy Thistle and Red Sandalwood from Central Africa to deliver a bright ruby red vermouth, which inspired the name of the expression. The delicate balance of botanicals creates a full-bodied herbal and complex style of Vermouth di Torino with a long aftertaste. ($14.99)