Cleveland (on the) Rocks: A Drink-Driven Visit

A few weeks ago I flew in to Cleveland, Ohio for the first time on a super quick visit to give a talk on the Gin & Tonic and see some bars and the city. My trip was co-sponsored by Destination Cleveland, The Spotted Owl bar, and my G&T talk was sponsored by Watershed Distillery out of Columbus.

Friday Night: A Walk, a Meal, and Three Bars 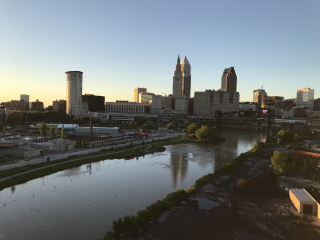 I got in on Friday evening and stayed at the lovely Kimpton Schofield Hotel right in Downtown. It's about a block from Progressive Field, home of the Cleveland Indians, which is right on the edge of Downtown so many of the bars and restaurants there are big group-accommodating venues. I didn't spend too much time in the area, but could have walked to the Rock and Roll Hall of Fame museum or (more likely) the Great Lakes Science Center. I like science.

I walked from Downtown over the Carnegie Bridge, which has a lovely view of the city's tall buildings and about a billion bridges over the winding Cuyahoga River, into the Ohio City neighborhood. I ended up spending most of my visit in that neighborhood and the adjacent Tremont area.

I met my host Will Hollingsworth of The Spotted Owl at restaurant the The Black Pig. For a pork-focussed restaurant, Executive Chef David Kocab did a great job serving me all the vegetarian options, only a few of which were on the menu. The cocktail list there is full of herbaceous and bitter, boozy options. We had a cocktail then switched to one of their weirder wines with dinner.

Then we executed Hollingsworth's plan for my visit- "kidnap" the chef from dinner and go to some of their favorite local/dive bars with them. We went with Kocab to a couple of neighborhood spots. The first stop was the excellently-named Prosperity Social Club. The historic venue is roomy and decorated with vintage signs for P.O.C. beer, but I had an O.K. Beer in keeping with Polish traditions of the area (and not needing another cocktail at the minute). 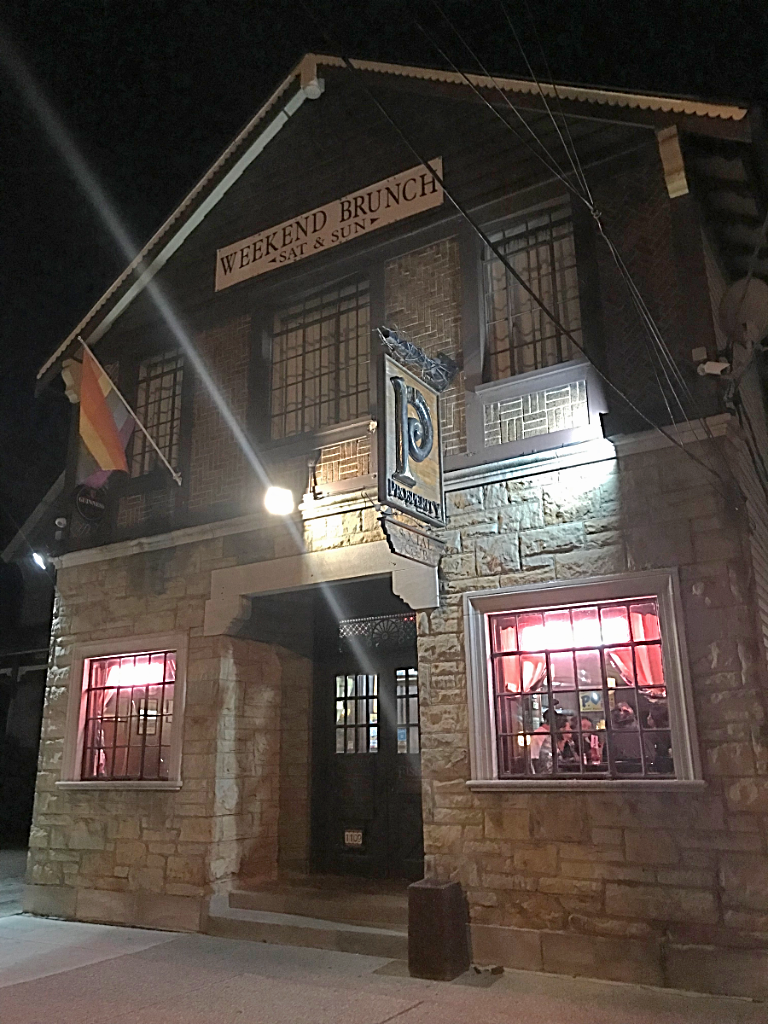 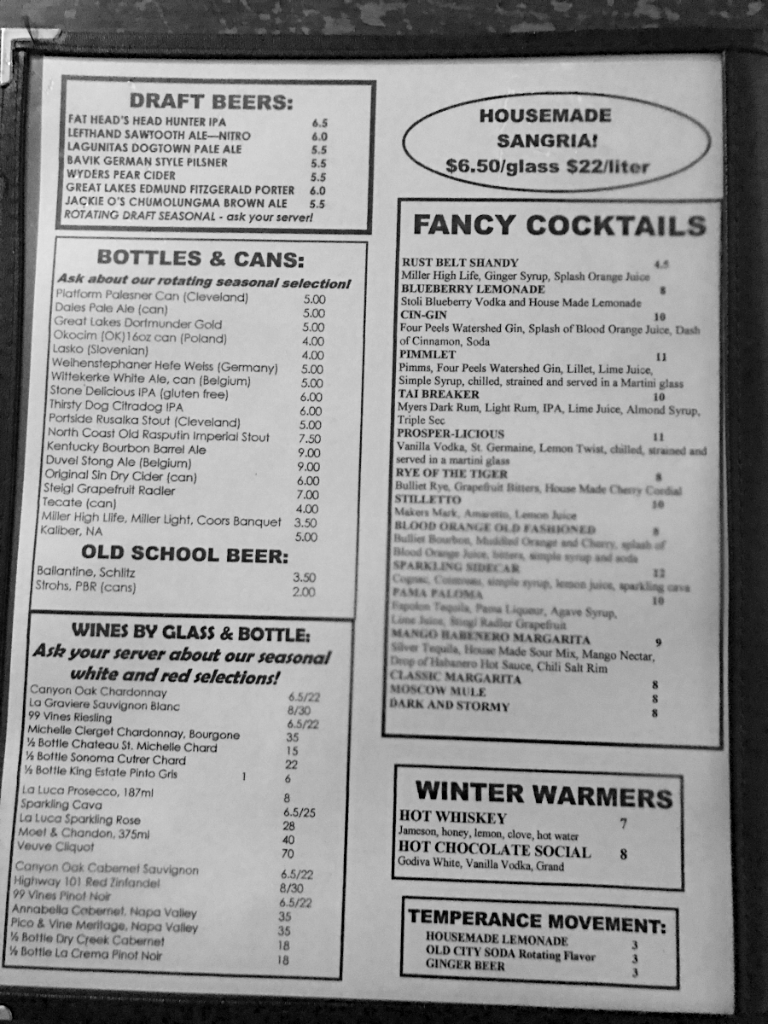 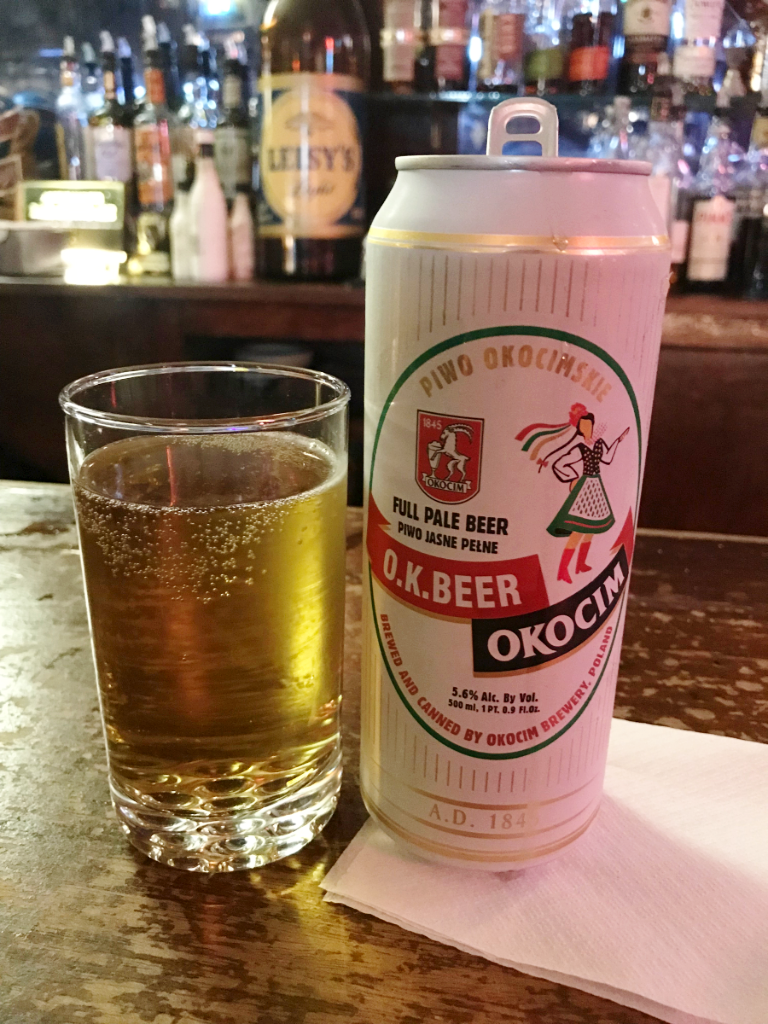 Just down the block, we stopped into the lively Hotz Cafe, a baseball-centric, family-run (you could tell by the banners that said so) tavern that was hopping on a Friday night. There were (family members, I assume) older women bartending, which is always a sign you're in a great bar. There we just had a shot of whiskey that I probably should have skipped for reasons of sobriety. 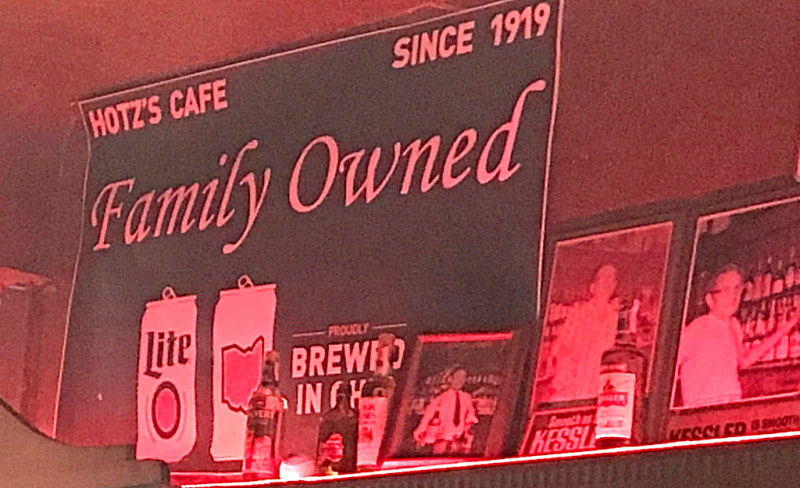 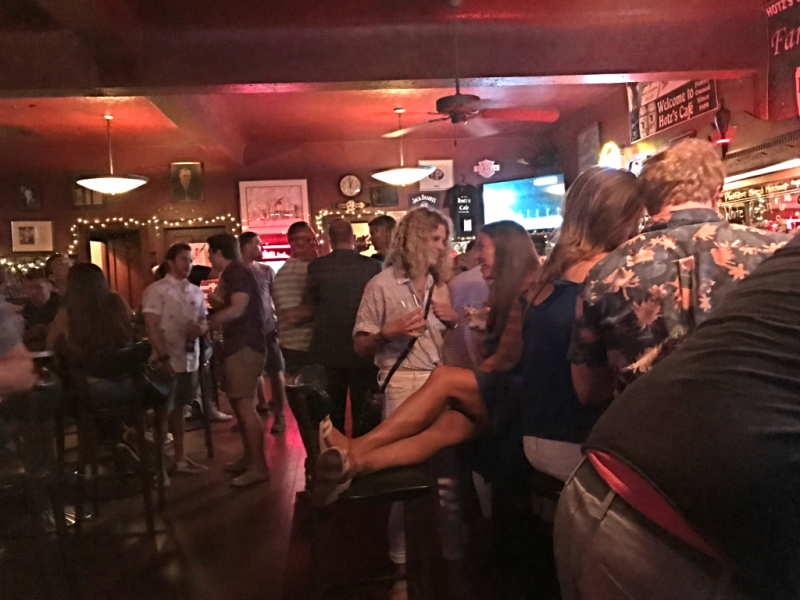 Last stop for the night was The Spotted Owl, but more on that place later. 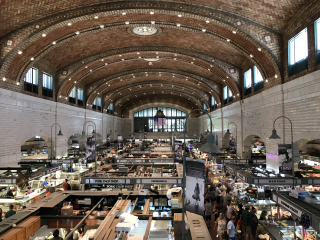 Saturday daytime we ran around town to see some of Cleveland's sights. One sight I didn't see much of is Lake Erie: Though Cleveland is located at the intersection of the Cuyahoga River and the Lake, the city isn't oriented looking out onto it for the most part. We started the day back in Ohio City at the historic and wildly popular West Side Market, a big indoor market (I believe there is an outdoor produce component also) in a tall arch-roofed building selling all sort of meats and regional foods. We had a delicious hangover-killing falafel (and a beer from adjacent Market Garden Brewery).

From there, we hopped in the car and headed over to the Cleveland Cultural Gardens, a string of green areas and sculptures/gardens/memorials divided into sections dedicated to the many different immigrant communities of the region.

Next up was the super impressive, massive Cleveland Museum of Art. The whole museum is free - there's not even a ticket counter at the entrance - and huge and spacious, with a pretty incredible collection of classic paintings by many of the well-known masters, a room of armor, and other historic works like a section on ancient Japan. 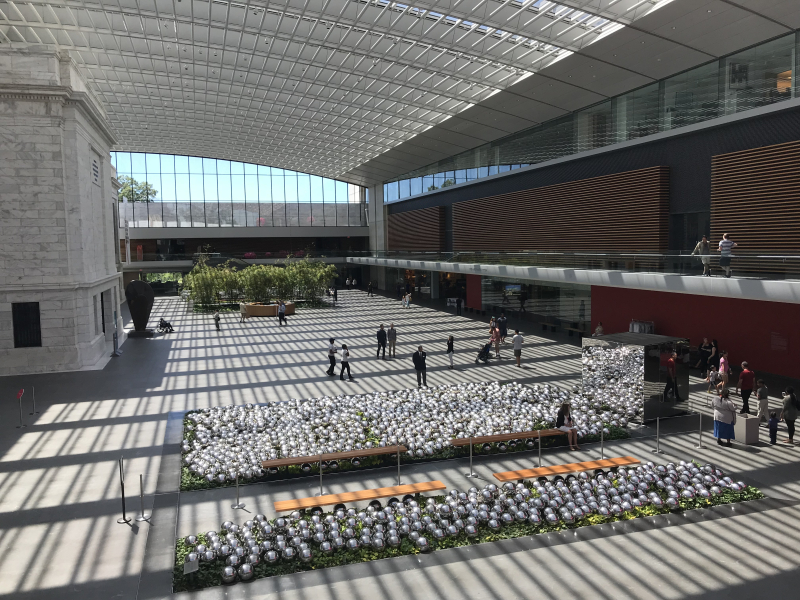 Time for lunch: We stopped into the funky Euclid Tavern, aka "The Euc." It's a pub and live music venue, and host to a Happy Dog hot dogs. We ordered up an off-menu veggie version of a Polish Dog, which is a hot dog topped with coleslaw, french fries, and spicy barbecue sauce. It would be fun to see what the place is like at night. 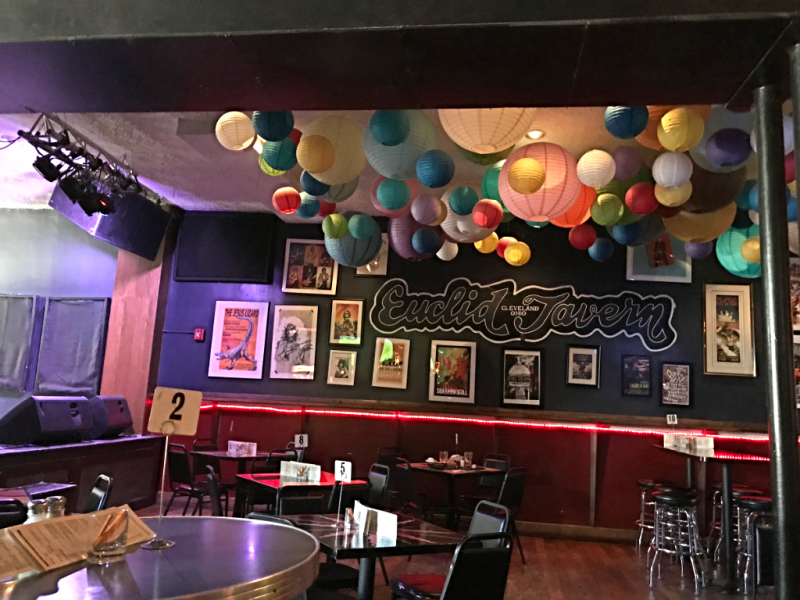 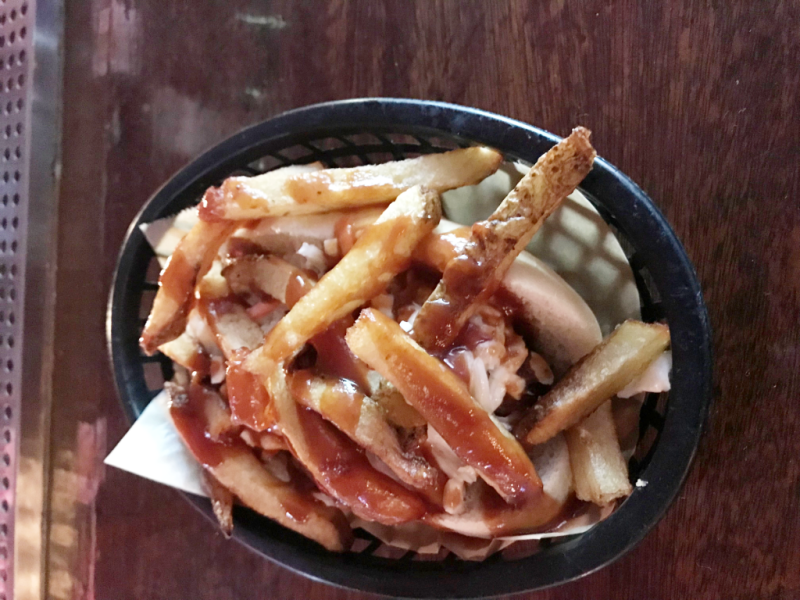 After a nap, it was time to play "kidnap the chef" again, this time after dinner at The Plum. The popular and hip venue features inventive food by chef Brett Sawyer. We had multi-layered veggie dishes that included touches like mezcal-infused strawberries, grilled rose petals, and Amaro Montenegro pudding. Fantasty.

Sawyer then took us to the Tarrymore Inn, an absolutely spectacular dive bar in the Lakewood neighborhood. The tap beer options are Budweiser and Genesse, available in $1, $1.50, and $2 pours - and the two-buck option is about 22 ounces. It's a cash-only venue and I felt like a king throwing down a ten dollar bill paying for entire rounds of drinks. Beyond the absurdly cheap prices, the venue has a long bar with large booths facing it, a back patio of several sections cobbled together, and this sign: 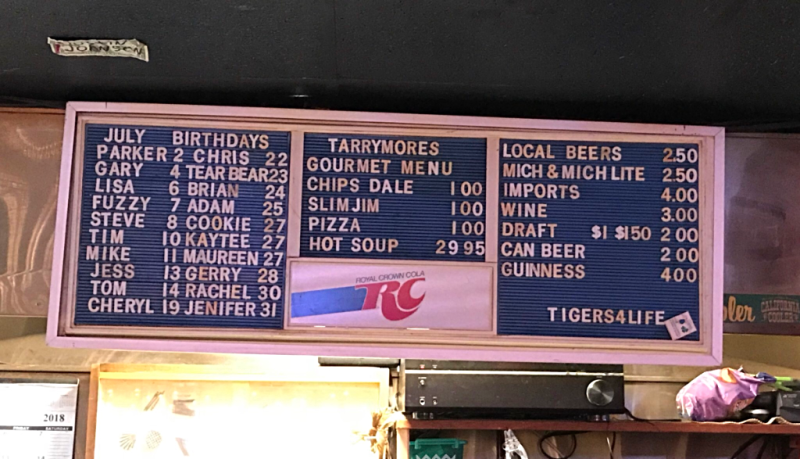 The thirty dollar soup is a local bar joke - Ohio liquor license laws require a hot soup option: "The premises must be equipped to prepare and serve the minimum food required by the Division including: hot soup, sandwiches, and a hot and a cold non-alcoholic beverage." So every bar in town has a microwave and a can of soup on premises in case of inspection.

We were having so much fun we almost didn't make it to our final stop in time: Porco Lounge and Tiki Room. (That wasn't supposed to be our last stop either - I never made it to the other top cocktail bar in town, the Velvet Tango Room.)

Porco has, shall we say, a bit of a reputation. The drink menu is focussed on tiki classics, which are typically very boozy. That, combined with a lively atmosphere and wild batch of bartenders, makes for an environment in which people get just a touch tipsy. Other bartenders talking around town would say things like "they just came from Porco's" or "but we were at Porco's first, so..." as shorthand for a people on a wild ride. 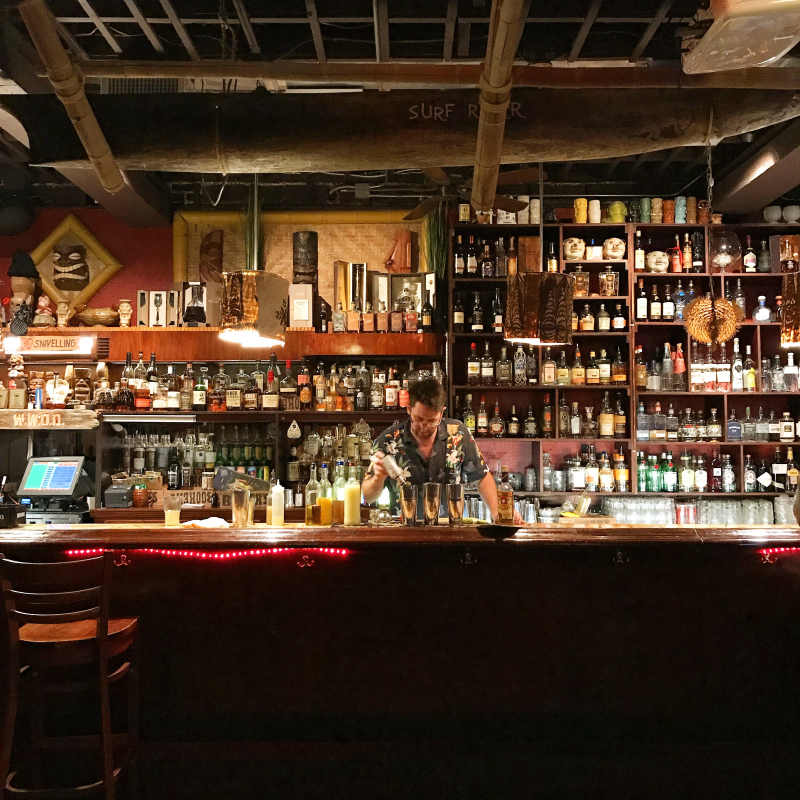 At the time we were there, they'd already started cleaning up for the night but were fantastic hosts nonetheless- making the last cocktails for the night (I had a Mai Tai and a Test Pilot... and maybe a shot or two), messing with the soundtrack, jabbering on the bar microphone, and dancing around the room. It was so much fun even though we were the only customers in the place.

Given Saturday night, Sunday morning began Sunday afternoon. I just cleaned myself up and headed over to The Spotted Owl for my talk.  Watershed sponsored a make-your-own Gin & Tonic bar with their Four Peel Gin for industry and consumers and I blabbed on for about 45 minutes about malaria, cats, syphilis, and bubonic plague. Good times! Great audience!

While I didn't expect to play another round of kidnap the chef that night, it sort of happened anyway. A group of folks walked over to Ushabu for the Sunday night  kaiseki dinner. The dinner was overwhelming - mine was about a billion mushrooms, while everyone filled their bowls with pea-fed lamb and drunken wagu. We shared several bottles of sake chosen by chef Matthew Spinner - and with him- as he hung out at our table drinking when he wasn't in the kitchen. It was a mild version of kidnapping in that our victim never had to leave the house. After a final glass of Hakushu 12 (RIP) whisky, I returned to the Spotted Owl.

Spotlight on The Spotted Owl

I've been in touch with Owl owner Will Hollingsworth for several years, and have included the bar in some stories such as one on using isolated acids in cocktails (I don't think the final version is online anymore). The bar has the sorts of bells and whistles I like: big clear ice and a centrifuge.

The space itself is like a lounge in an old church basement- dark brick walls, thick wooden beams, and most of the light from shining stained glass windows behind the bar. It's a gorgeous space. If I lived in Cleveland I'd have to make the kind of friends who'd go there a lot. 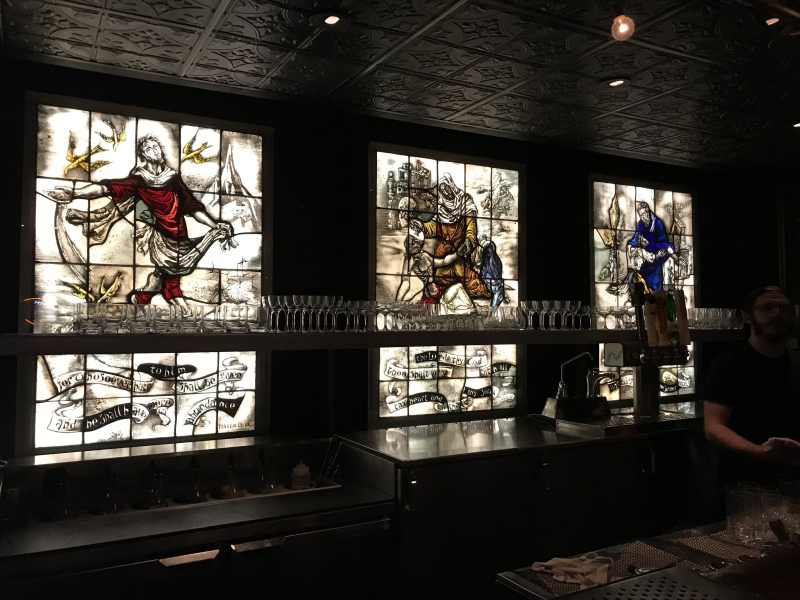 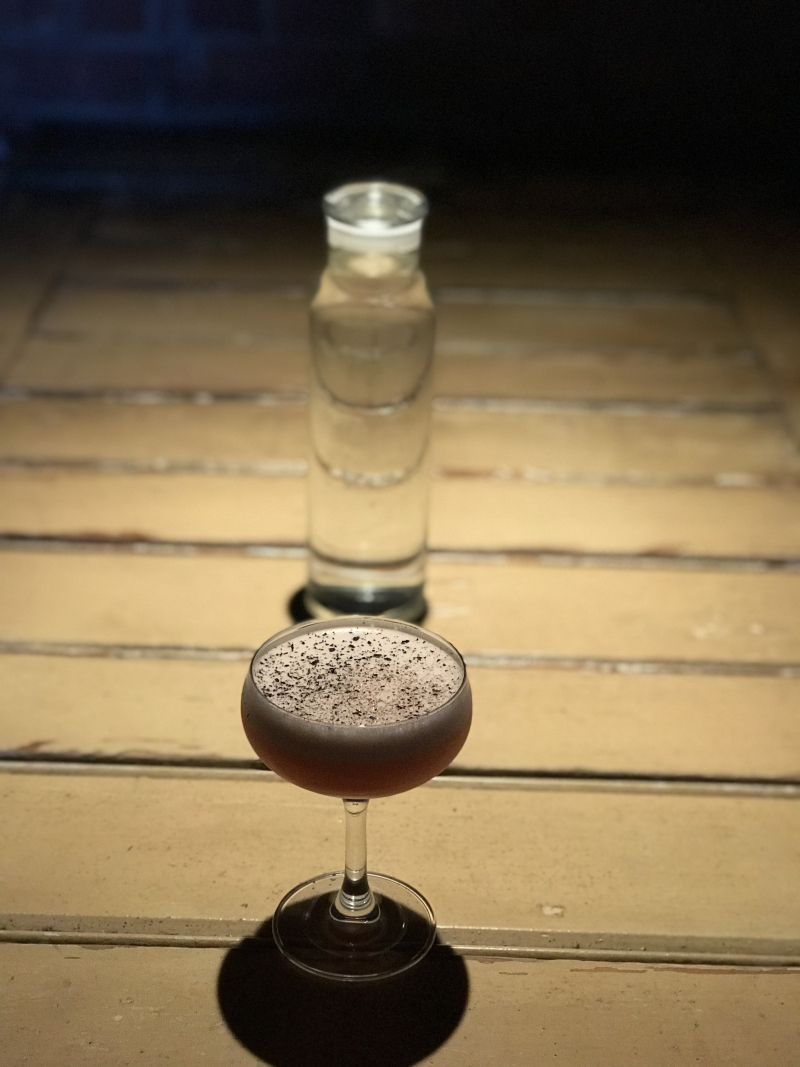 But how about the drinks? Oh yeah, they're swell too: I had a few highlights that included their savory and dark Sesame Bamboo, and their very special Banana Daiquiri (banana cane syrup, Giffard banana liqueur, lime, Rhum JM, Bacardi 8 centrifuged with black banana) that had layers of banana flavor from candy to natural.

And then there are the menus! The current one is a sort of choose-your-own adventure menu in the form of a wheel of moods and flavors. A previous one was an all-pisco menu. 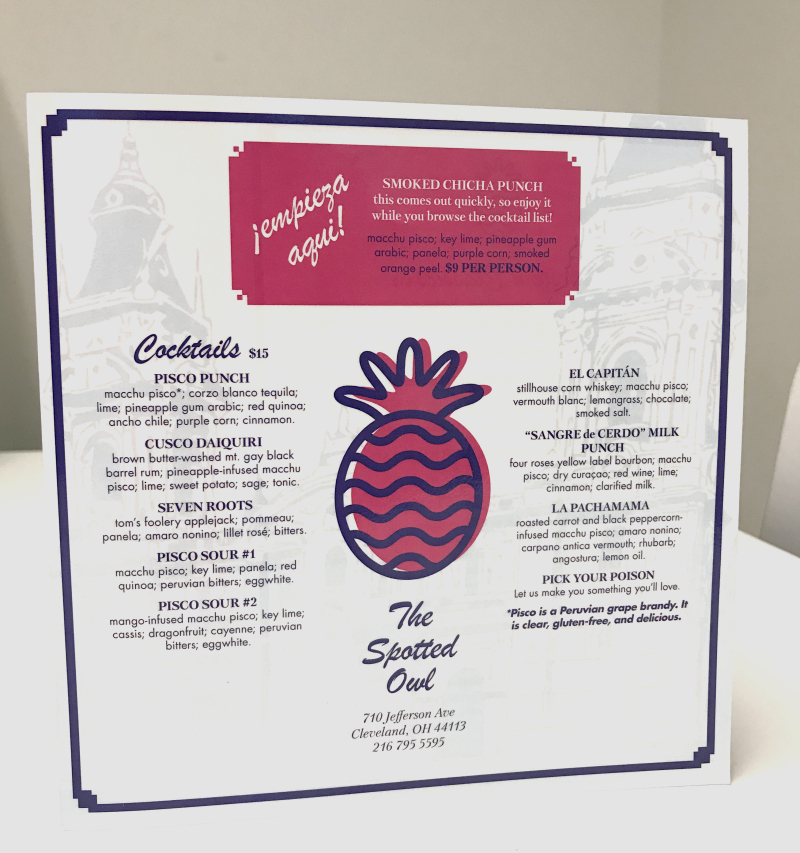 But then there is the Origami menu, with all Japanese flavors that folds out twice. Awesome! Adorable! 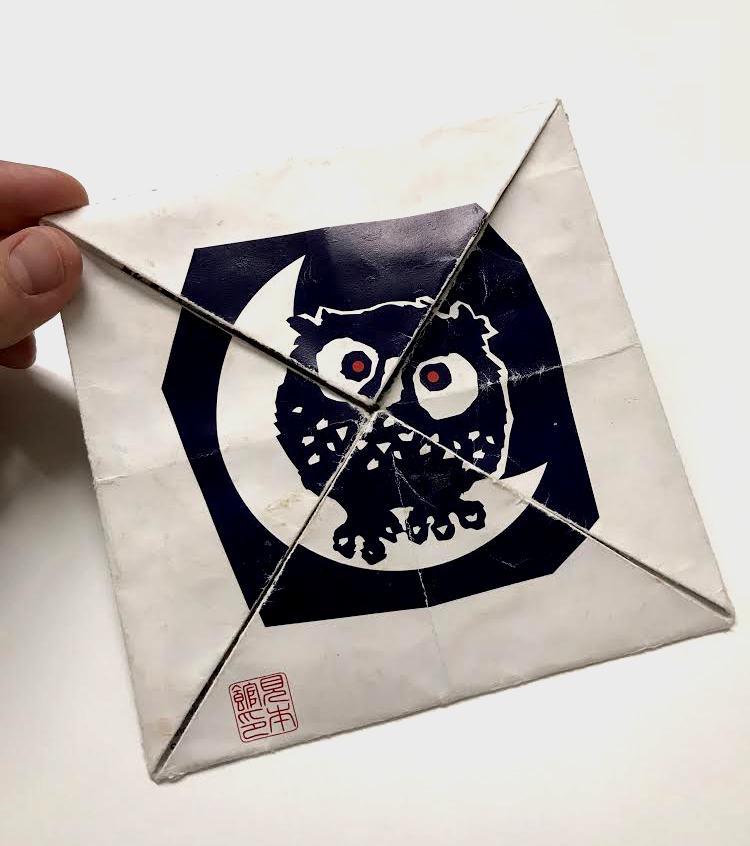 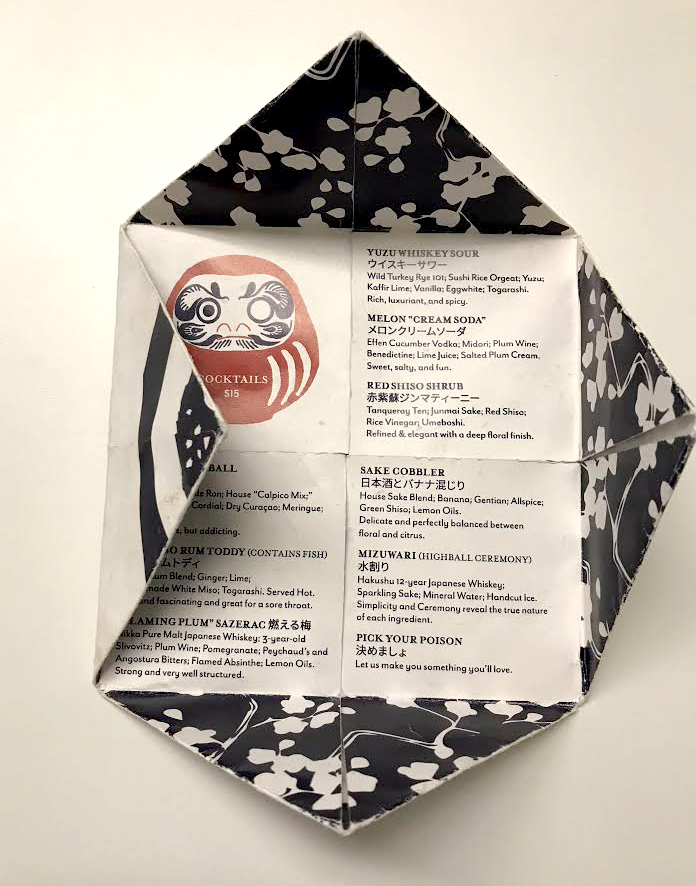 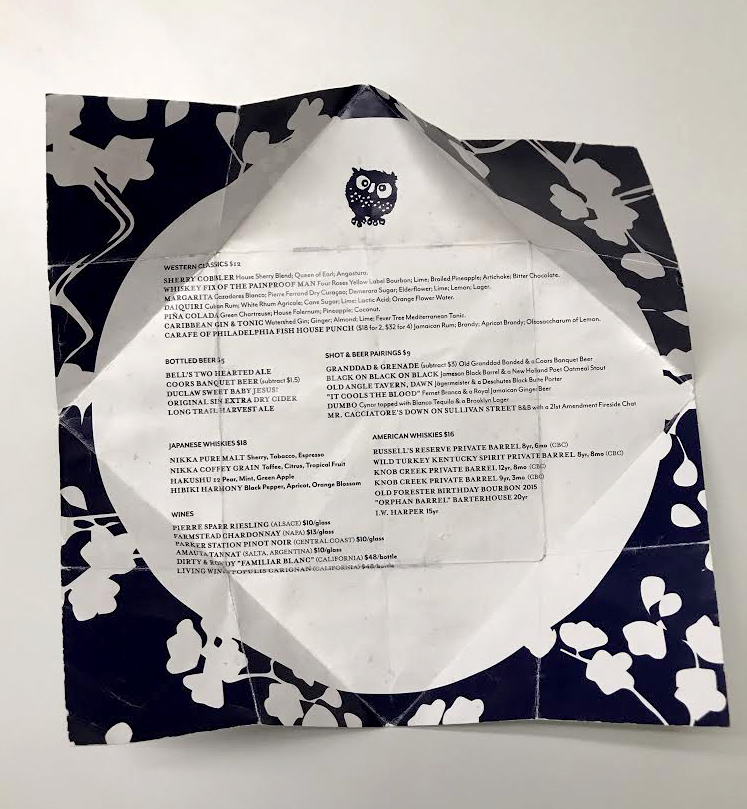 And finally, the Education of Cyrus Menu. This thing is a masterpiece. The design is cool, and easier to navigate then these pictures might look. But the concept is based on an ancient book and introduced as such: 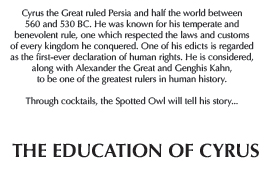 The story is "a largely fictional biography of Cyrus the Great the founder of Achaemenid Empire, the first Persian Empire.... a political romance, describing the education of the ideal ruler, trained to rule as a benevolent despot over his admiring and willing subjects," according to Wikipedia.

Here's just one page of the book that tells about the global rhubarb trading route (!?!?!) in the history of Cyrus, with a drink built around rhubarb sherbet. Extraordinary. 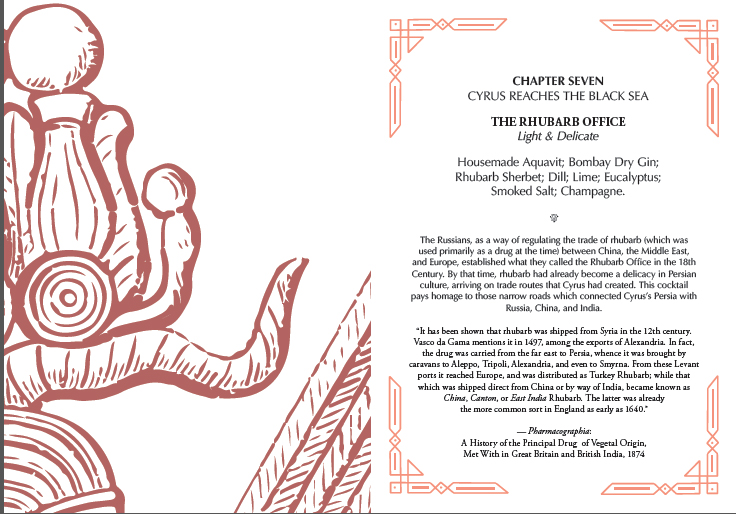 And here's another page based on the theme of saffron and the death of Cyrus. 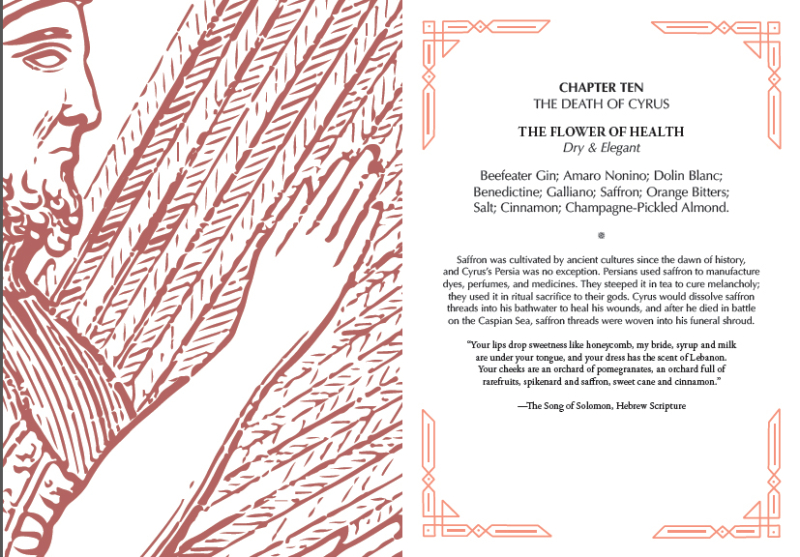 That Cyrus menu is insane! Love the story telling! Love the illustrations. Type is appropriately textbook. What a bar.

I've got a fairly beat-up hard copy of it if you want to see it in the flesh sometime.