There are so, so, so many new drink books coming out this fall (a longer list will follow in another post), but I noticed that three of them are women-centric. Three makes a trend, y'all.

Below are the new books, with a few older ones mentioned below. As usual, the descriptions are from the publishers and are not reviews. Links are to Amazon. 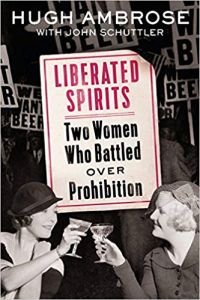 A provocative new take on the women behind a perennially fascinating subject--Prohibition--by bestselling author and historian Hugh Ambrose.

The passage of the 18th Amendment (banning the sale of alcohol) and the 19th (women's suffrage) in the same year is no coincidence. These two Constitutional Amendments enabled women to redefine themselves and their place in society in a way historians have neglected to explore. Liberated Spirits describes how the fight both to pass and later to repeal Prohibition was driven by women, as exemplified by two remarkable women in particular.

With fierce drive and acumen, Mabel Willebrandt transcended the tremendous hurdles facing women lawyers and was appointed Assistant Attorney General. Though never a Prohibition campaigner, once in office she zealously pursued enforcement despite a corrupt and ineffectual agency.

Wealthy Pauline Sabin had no formal education in law or government but she too fought entrenched discrimination to rise in the ranks of the Republican Party. While Prohibition meant little to her personally--aristocrats never lost access to booze--she seized the fight to repeal it as a platform to bring newly enfranchised women into the political process and compete on an equal footing with men.

Along with a colorful cast of supporting characters, from rumrunners and Prohibition agents on the take to senators and feuding society matrons, Liberated Spirits brings the Roaring Twenties to life in a brand new way. 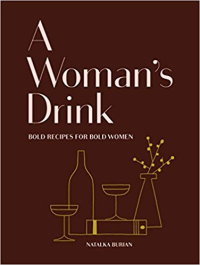 A chic and empowered approach to mixing drinks in style, A Woman's Drink is the ultimate cocktail book for ladies. Filled with gorgeous cocktails and favorite drinks from notable women, this chic package celebrates a new cocktail culture that's distinctly and unapologetically feminine. Inspired by Brooklyn bars Elsa and Ramona, the cocktails here capture the joys and pleasures of making the perfect drink at home. Whether you're drinking solo, drinking with a plus one, or drinking with a crowd, there's a recipe for every occasion. Featuring 50 mixed drinks—including classics like Cosmos and Negronis, as well as new spins like Elderflower Bellinis—the cocktails in this book are strong, spirited, and bold, just like the women who drink them.

The pre-Prohibition-cocktail craze has produced bars, books, articles, and nostalgia for a time when women couldn’t vote or go out alone. This often meticulously copied historical cocktail culture is wildly limiting. Mixing and sharing drinks should be an adaptable, informal, and joyful practice, and not a masculine pastime by default.

A Woman's Drink debunks some of the myths being circulated and encourage you to call anyone out on them, whether it’s a mansplaining suspendered bartender or a pompous uncle. Everyone should feel confident—even powerful—when it comes to serving, sharing, and inventing new drinks for and with their friends and loved ones. 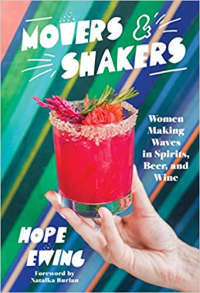 In her travels across the country, Hope Ewing discovers how women are paving the way and creating a more inclusive and sustainable world full of delicious drinks.

A veteran bartender, Ewing had grown impatient with the surprisingly outdated perceptions of women in the alcohol industry. Entrepreneurial and ambitious, often the first in their fields, the women she knew in the business were leaders, mentors, and trailblazers. In Movers and Shakers, Ewing seeks them out, to share their stories as well as valuable business advice and insight into a constantly evolving industry.

Hope Ewing grew up in a haunted house surrounded by forest and sheep pastures in western New York State. After a decade raising money for New York City arts organizations, she received an MFA in creative writing from Columbia University and promptly moved to Los Angeles, where she finally became serious about bartending. Combining the twin passions of writing and drinking, she seeks to illuminate how intoxication and culture intersect, for better and for worse. Her work appears in PUNCH, Serious Eats, and other fine publications. She lives in LA with her partner and step-chihuahua, and her favorite drink is all of them.

Putting together a gift package? Maybe round it out with these two books: