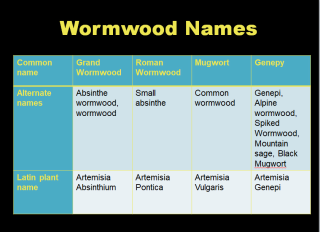 When I was studying the various types of wormwood used in spirits earlier this year, I got a bit confused about Genepy/Genepi. All wormwood is a member of the artemisia genus.

After laying that out, I came to learn that there is a difference between artemisia genepi and genepy liqueurs, thanks in large part to Stephen Gould of Golden Moon Distillery. He makes a genepi called Ex Gratia.

According to Gould and supporting evidence from elsewhere on the internet, Genepy liqueurs can be made from not just artemisia genepi, but basically any artemisia that's not grand wormwood; often several of them mixed together. Gould clarified a working definition of genepy liqueur for me in email:

Any liquor/liqueur made with any member of the artemisia family, except artemisia ab. (Grand wormwood) would be considered a Genepi ... the exception being Amaros where the various types of wormwoods are a supporting flavor. Gould also wrote a profile of artemisia species for a 2014 edition of Distiller magazine. It no longer appears to be online (I think they're working on getting the archives up in a readable format so maybe it will return in the future), but he wrote:

Genepi
Genepi (or Genepy) are liqueurs typically made using “lesser”
wormwoods (such as petite/roman wormwood, sea
wormwood, black wormwood or rock wormwood), either
alone or in combination with other spices and botanicals.
These liqueurs are produced throughout the alpine areas of
Europe and are referred to by a variety of names. They are
commonly referred to as genepi in the Alps and Pyrenees
mountains. The word genepi is often also used to refer to
various wormwood plants as well, especially in France and
the French-speaking cantons of Switzerland.

Gould also included a recipe for a Genepi from a handwritten distiller's note circa 1800 [excerpt]:

Genepi des Alps
Take of the common and sea wormwood, dried, of each ten
pounds; of sage, mint, and balm, dried, of each twenty handfuls;
of the roots of galangal, ginger, calamus aromaticusm and
elecampane, of the seeds of sweet fennel and coriander, of each
three ounces; of cinnamon, cloves, and nutmegs, the lesser cardamoms
and cubebs, of each two ounces.

The reason that this came up is there is a second American-made genepy coming out. As I posted in New Booze yesterday, the Bittercube folks are releasing a genepy liqueur to the Midwest US this year with a larger launch in 2019. They describe the new product as:

Heirloom Genepy was developed in the Bittercube apothecary and gathers inspiration from a variety of Artemitis plants, while bridging the gap between robust varieties and more subtle variations. With respect for the category, this modern Genepy was formulated with bright alpine botanicals, and mellowed with honey.

Long story short: artemesia genepi may or may not be in genepy liqueurs, which are flavored with non-absinthium artemisia species. It would be fun to compare various genepy liqueurs to see how they're interpreted by these different distillers.