Goth Tiki is the Bar Theme of the Moment 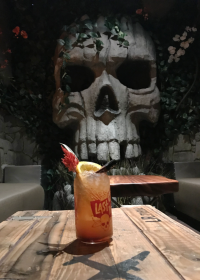 Earlier this summer San Francisco saw the opening of Last Rites, a "Polynesian Noir" tiki-esque bar themed like a plane crashed into a cannibal tribal ground in the jungle.

A few months later, the Future Bars group (Bourbon & Branch, Pagan Idol, etc.) announced they too were doing tiki-but-scary with their concept Zombie Village in the former Tradition spot. Eater reported that the bar would be, "channeling Caribbean island culture with a very tropical interior, and hints of Haitian voodoo."

Today I read about not a dark tiki bar, but a haunted mansion themed bar from the owners of a tiki bar; Shameful Tiki in Vancouver.

It will be called The Dark Manor Inn and the images look like you took the patterned wallpaper and pressed tin ceilings of a speakeasy bar and added Victorian portraits, skulls, and religious artifacts to it.

As someone who believes that Halloween is the best holiday, I am all for this trend, as long as the drinks are still good.

Ms Kitt & I think this is a great idea. We were at Jacobi's in Sydney a while back, a tiki bar themed around the psychologist from Twin Peaks. Not quite gothic but certainly out there :)

Hah, that's awesome. Sydney had some fun theme bars last time I was there too, though I didn't go to Jacobi's.

Yeah, there's certainly some fun spots in Sydney & Melbourne. Let me know if you're coming down this way & we'll get you some spots to visit :)
Ditto for Hannover where we have some fun contacts :)