Historical Info About Scurvy and the Confusion Between Lemons and Limes 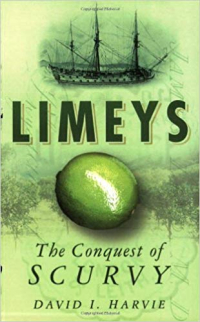 I recently (yesterday) finished reading the 2002 book Limeys: The Conquest of Scurvy by David I Harvie. The book isn't really about the global history of scurvy but focuses on one surgeon, the scot James Lind, who was the first person to really prove the efficacy of citrus juice as a treatment in 1747. However, his suggestions of provisioning British Royal Navy fleet with juice weren't officially implemented for another 50 years.

Turns out that's not a new problem. When citrus was first being recommended as a cure (and later as a preventative) for scurvy, doctors like Lind most often recommended the juice or oranges and lemons. Oranges never took off, and the juice of lemons was often called lime juice.

Actual lime juice from limes started becoming the more popular option after 1800, thanks in part to the relative ease of sourcing West Indian limes. British sailors were first being referred to as "lime-juicers" and it was Americans who shortened the expression to "limeys," according to the book.

Sailors often associated scurvy cures with acidity, which makes good sense and is not far from the truth. Other cures brought aboard ships included acidic food and beverages including vinegar and sauerkraut. It wasn't until 1918 that it was proven that citric acid itself is useless against scurvy (and I assume vinegar's acetic acid too), and shortly thereafter that the newly-identified Vitamin C was the anti-scorubic needed. 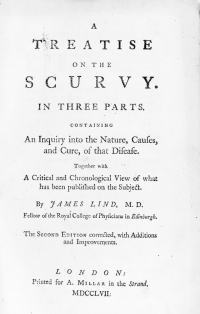 So here's the thing:

Orange have more Vitamin C than lemons, which have about 40% more Vitamin C than limes. (Though the acidity of these citrus fruits is in the opposite order.) If that lime juice was stored in a barrel or came into contact with copper or cooked to reduce it (which was usually the case until the invention of Rose's Lime Juice Cordial), the Vitamin C would degrade even further, becoming nearly useless against scurvy.

The initial confusion over the definition of limes, and the later decision to switch from lemons to limes, proved fairly disastrous to the British. Incidents of scurvy in the Navy crept up again and new false medial theories with other problematic solutions came back into vogue.