A Visit to the Luzhou Laojiao Baijiu Distillery in China

I lied in the title of this post. It should be called "A Visit to One of the Luzhou Laojiao Baijiu Distilleries," because they operate 36 of them! If you haven't been following along on my series of posts about baijiu, here are the ones I've done so far:

The last post was the first real introduction to "strong aroma" baijiu, which is the specialty of Luzhou Laojiao. I'll touch on it again on this one.

Luzhou Laojiao makes the flagship 1573 baijiu, aka National Cellar 1573.  They also make the new product Ming River Baijiu that was developed for the export market. I visited the distillery on behalf of Ming River.

Luzhou, the city, is located along the Yangtze River in the Sichuan Province. 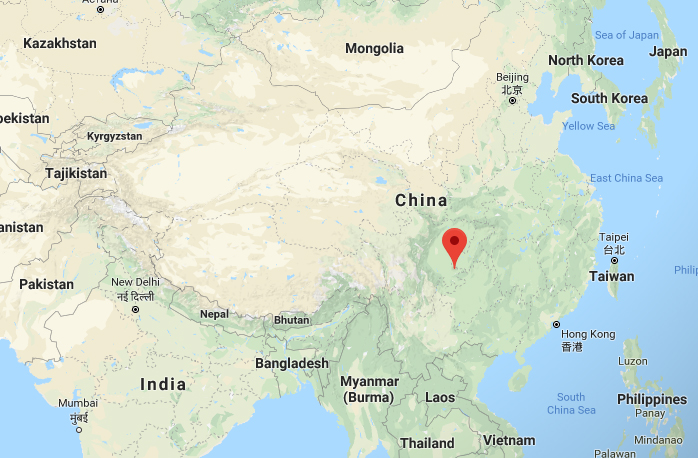 We flew in from Beijing, passing over the most magnificent dramatic mountain scenery. I took about 100 photos on the plane ride over the three or so hours. It looked like the below photo for about 80% of the flight. Majestic. 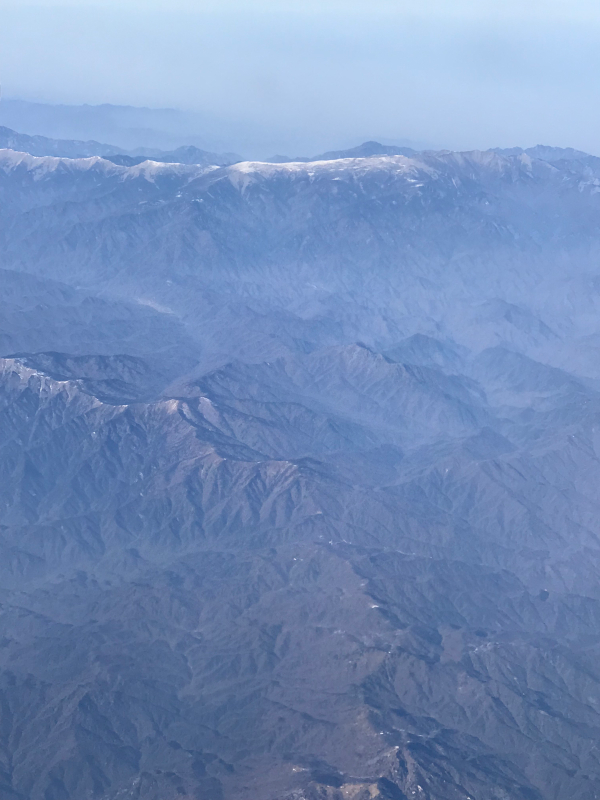 The first distillery we visited, which is the one open to the public, has been operating since 1573. They say the city grew up around the distillery and I can definitely see that - the facility seemed tucked around a corner in the heart of the city with a highway nearly running over it, yet somewhere on-site they had additional workshops (distilleries) and an aging cave cut into the hillside. 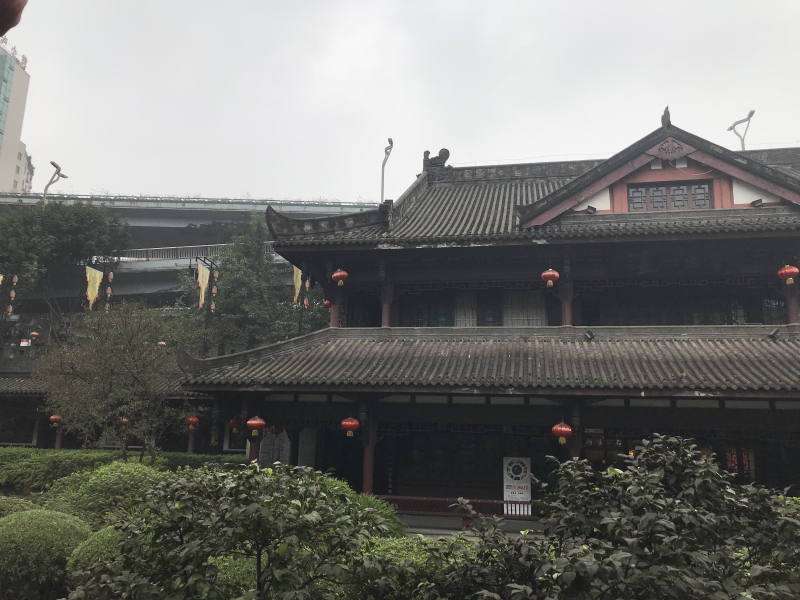 This is the visitor's center and cafe.  The highway is to the top left.

The part of the facility open to tours is a huge warehouse. Tours walk around two sides of it, watching production below through glass windows. In this facility, everything is done by hand. With 36 distilleries to choose from, naturally the company allows tours only of the oldest - more modern machinery is used at others.

As you can see in the below pictures, the room is covered with mud mounds and central pot stills. The mud mounds are all actually square pits dug into the ground. They're filled with grains and qu (yeast, mold, and bacteria) and ferment as solids in the pits. They're filled to overflowing so that they look like mounds, then covered with a layer of mud to seal them.

The mud on top of the pits is sprinkled with some distillate (probably tails) to keep it moist, and thus sealed against oxygen so that the fermenting grains don't turn into vinegar. As mentioned in a previous post, when fermentation is completed in 3-4 months (most of the year, but can be up to 6 months in winter), the grains partially collapse and the top of the pits sag. Then it's time to dig them up and distill them. 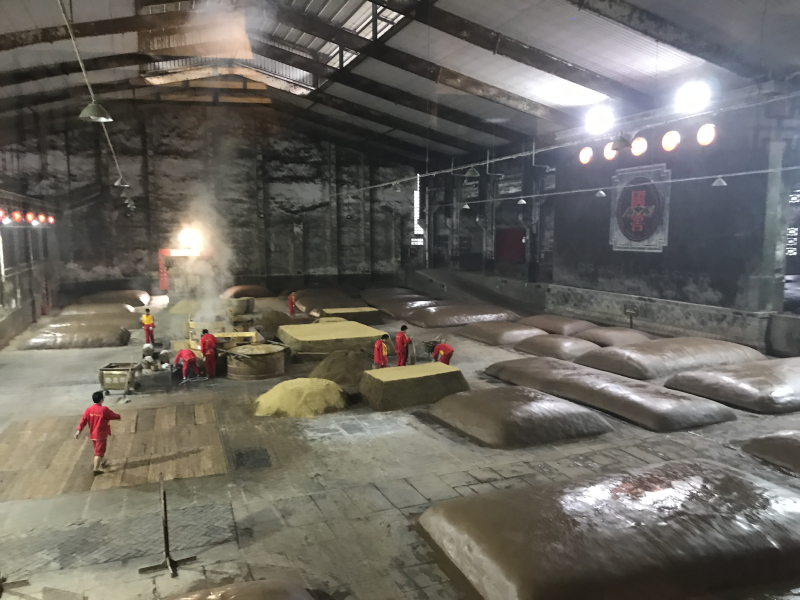 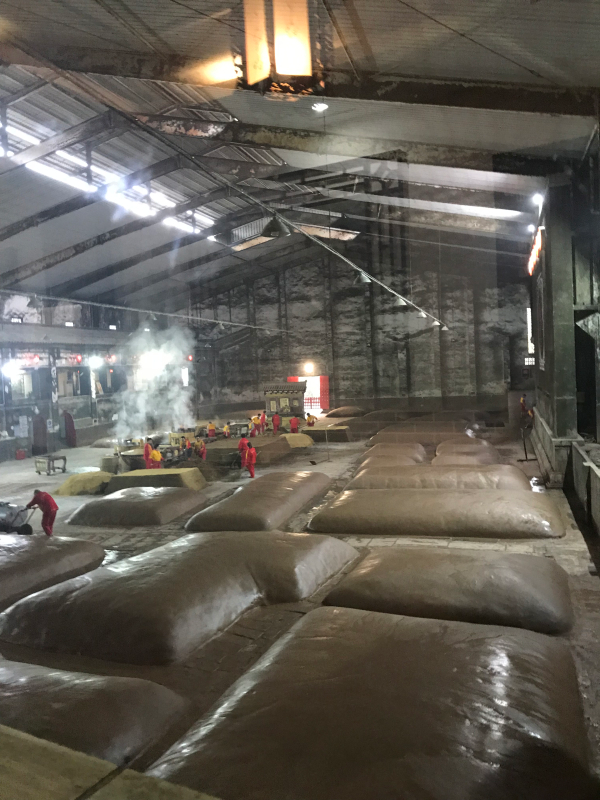 All of the pits on site are at least 200 years old, with 4 of them dating to 1573. (Some but not all distillate in the 1573 brand is made in these pits.) They've been in continuous operation all that time, since that's the unique aspect of strong aroma baijiu. The Luzhou Laojiao company owns over 10,000 fermentation pits(!) in 36 "workshops" (distilleries). 1619 of their pits are over 100 years old.

The stills here hold 1000 kg of grains per load, which produces 50 liters of baijiu at 68%, which is then watered down before bottling (not sure about before aging).

Our group was super lucky and was able to see a second distillery on the same site, not open to tourists. We don't have permission to share pictures from that distillery, which is a real shame because it was incredible and we were able to walk among the pits and speak with the distiller. Not sure how long we were supposed to be in there but we lingered more than an hour and we saw an entire distillation cycle.

In this second, smaller facility, there were 21 pits and just one still in the room. They told us that each pit holds enough fermenting grain to make 14 distillation runs - so they dig up a pit that's finished fermenting, and it takes them 14 distillation cycles to process it all before the grains are put back into the same pit with some new grains to ferment again.

In strong aroma baijiu, there is a single distillation. The distiller said the heads cuts are at about 72% and the heart is 68% - same as in the public distillery. 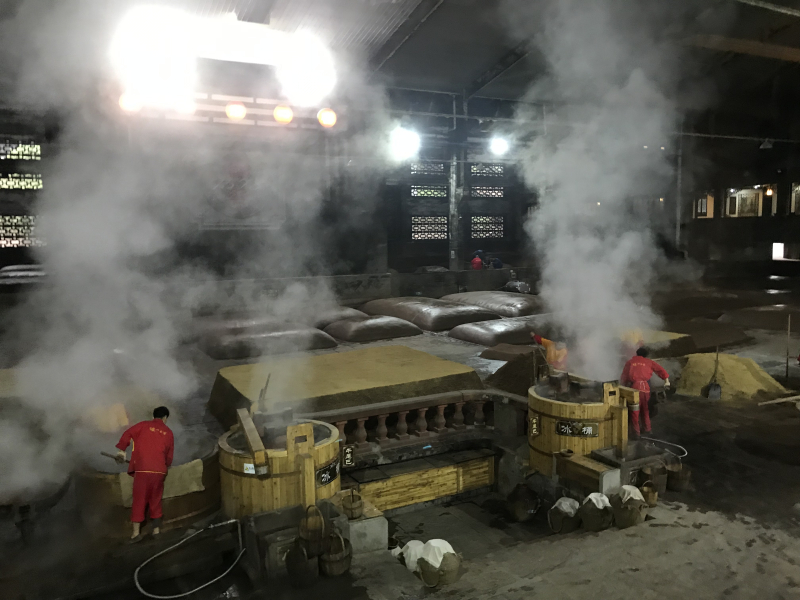 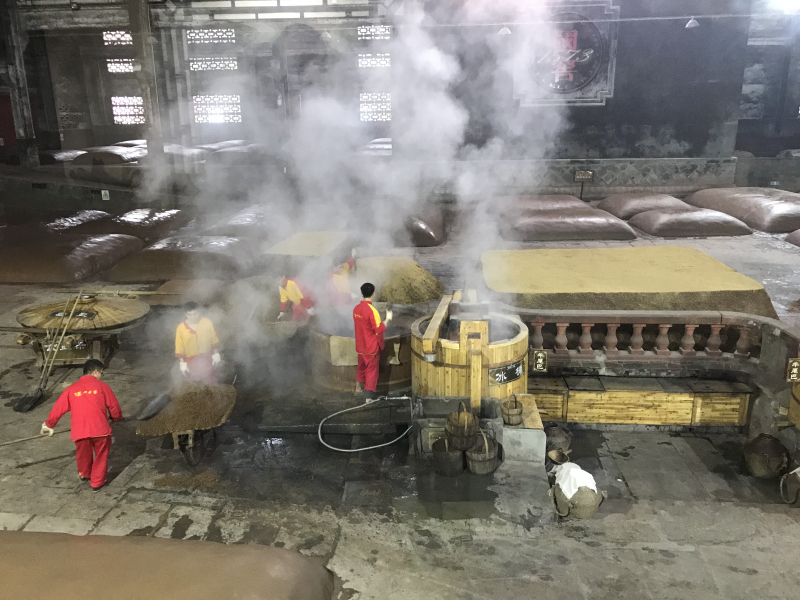 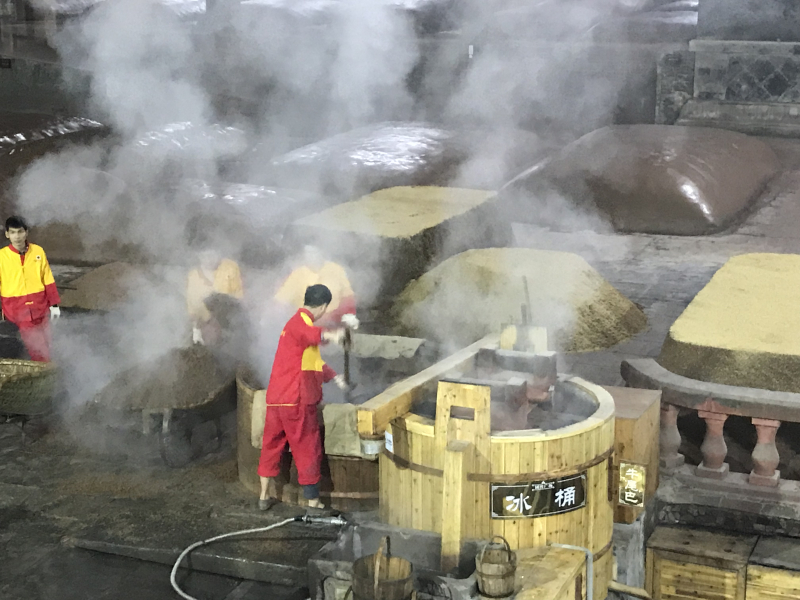 Here you can see that the distiller is using a pitchfork to pull the grains out of the still after distillation, and loading them onto a wheelbarrow. It's all done by hand at this distillery. In the foreground is the top of the still temporarily off the still base so that it can be unloaded and reloaded. The four pits in the back are the ones dating to the year 1573.

Each distillation cycle takes only about 1 hour, but the distiller said that it's really only 10-15 minutes of distillation (!) to extract the alcohol. After that's done, they toss buckets of water onto the grains in the still and the remaining time is for the gelatinization of the unfermented grains that were mixed in with the fermented grains. [see the previous post to learn about the continuous fermentation process.]

So if they ran continuously, each pit would take about 14 hours to distill, plus time to shovel the grains in and out of the still, which is done by hand.

We also visited one of the aging facilities. This one was a series of tunnels dug into the base of a mountain. The tunnels were once the homes of bandits, then they were used as bomb shelters in the war with Japan, then they became food storage facilities. They've been used to age baijiu for more than 50 years now.

We weren't able to take pictures inside the caves due to dangers of explosion- in fact we had to touch a static electricity removal machine on the way in. This mountain is located near the convergence of two rivers and the rocks are porous, allowing for a stable temperature and humidity conditions year-round inside. 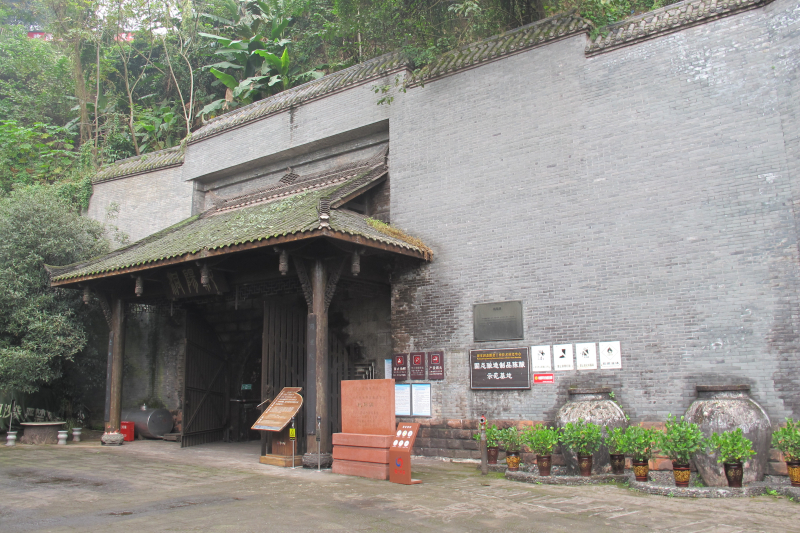 The entrance to the aging tunnels in the mountain. 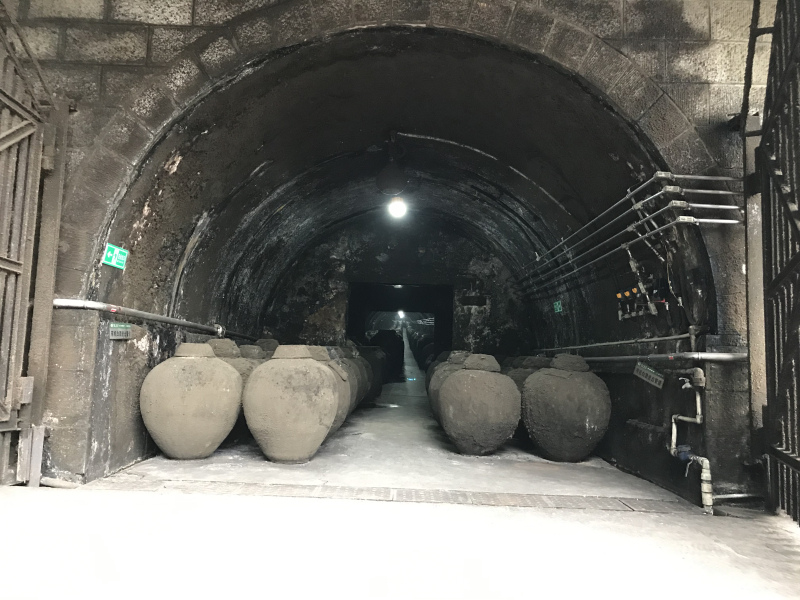 The entrance to the tunnels. Smaller, older aging vessels are at the front. You can see the ones on the right are shaggy with mold. The pipes are used to move liquids in and out. 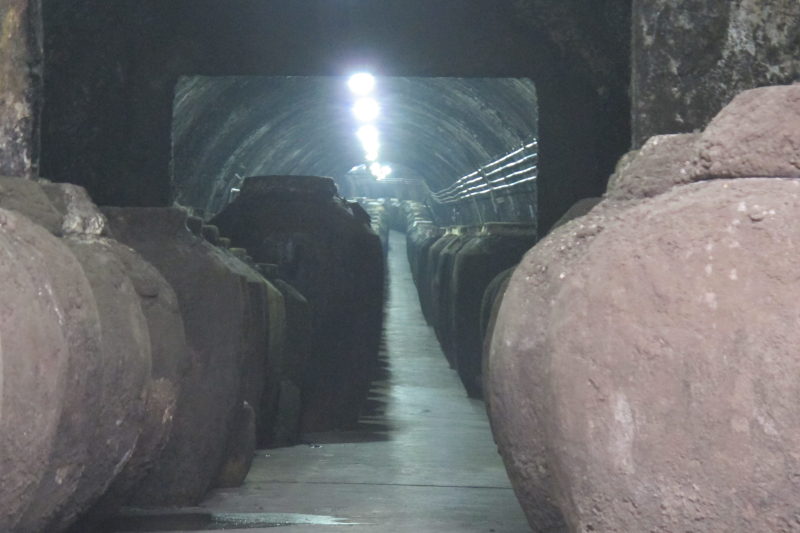 Zooming in on the entrance, you can see the larger vessels begin after the arch. The tunnels go wayyyy back.

In these caves were stored many thousands of large terracotta vessels that are about 5 feet tall. Each one of the standard size vessels inside holds 1000 liters (about $500,000 worth of baijiu). These tunnels were three pots wide and seemed to go far into the mountain - we walked into one tunnel then took an interior loop and back out the same entrance. Luzhou Laojiao has about 7 km of tunnels held in three different aging caves. One of them is located on the site of the distillery we visited earlier.

The vessels were covered in black flaky mold that looks like peeling paint. The dripping ceilings in the interior of the tunnels washes away some of the mold. The vessels are covered at the top with a paper that is waterproof so that the alcohol inside won't become diluted with drops from the ceiling, but it is breathable to let alcoholic vapors evaporate.

The vessels visible at the front of the tunnel are aging baijiu for the longest amount of time, some 50 to 60 years. They have thicker mold on the outside than the interior vessels.

The vessels are not moved to empty and fill them, but baijiu is pumped into them.

According to Derek Sandhaus, three things are happening during aging:

I forgot to ask if the baijiu is diluted at all before aging.

After aging in terracotta containers, the baijiu is blended. We headed to another facility that looked like corporate offices and meeting center to have a session with the master blender of Ming River Baijiu. She is the next in line to be master blender of all of Luzhou Laojiao. 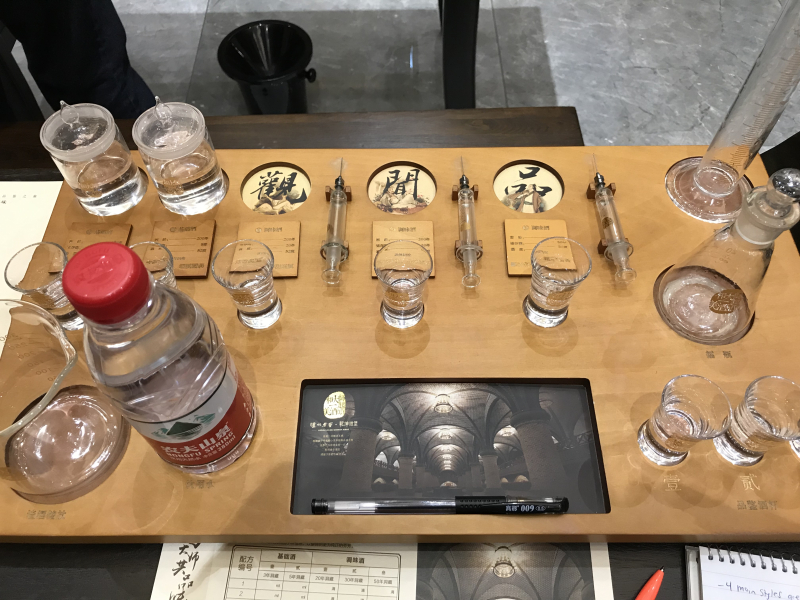 We did a little blending exercise where we added a base of younger baijiu with mere drops of baijiu aged up to 50 years (out of the syringes). It was dramatic what a tiny bit of long-aged baijiu could provide -deep, farm/barn earthy musty base notes.

At the blending exercise they told us about the legacy of master blenders at Luzhou Laojiao. They consider the first to be the creator of "big qu" baijiu in the 1300s, and a later one to be the inventor of the pit fermentation method/strong aroma baijiu in the 1400s. A later blender was the founder of the pits at the distillery dating to 1573.

One final note about filtration: According to our hosts, baijiu isn't chill filtered or charcoal filtered (at least Ming River is not); only a particle filter is used.

Stay tuned for more baijiu content, I'm not done yet!