Back to baijiu! We began the discussion with with Baijiu Production in Relation to Other Spirits then Regional Differences in Baijiu Style and Production.

Now it's time to talk about some production parameters. Like whiskey, baijiu is distilled fermented grains. The grains include more standard whiskey ones like barley and wheat, plus rice and sorghum. Sorghum is the most popular, followed by rice, sticky rice, then other grains.

As should be clear from the chart below, the grains can be mixed together or used alone. The vessels in which fermentation takes place can be stone jars or in pitts that may be earthen or lined with bricks.

The fermentation is accomplished not with yeast alone, but with qu.

Qu is a combination of mold, yeast, and bacteria. It is used not only for baijiu production but also for undistilled Chinese beverages.

Qu is made from clumps of grains that collect the yeast, mold, and bacteria.  It is crushed up and mixed with damp grains to ferment them. There are different types of qu to ferment different styles of baijiu - "big qu" is made in large bricks of usually wheat, sometimes with peas added. Small qu, which is made to ferment rice-based baijiu, is itself made from rice. Sometimes medicinal herbs are added to small qu to imbue the baijiu with medicinal properties. 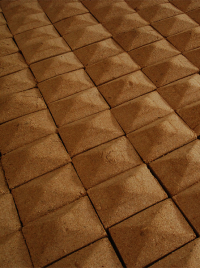 As you'd expect, the recipe/incubating conditions/location for each distillery's qu is their closely-guarded secret. I don't know if each distillery produces multiple kinds of qu for their various brands.

The Wikipedia entry for qu contains a great deal more information. The image of bricks of qu to the right is from the Luzhou Laojiao website.

Beyond than the use of qu, one of the other things that's pretty unique to baijiu is "solid state" fermentation. Rather than fermenting a sugary liquid (as in scotch and rum) or a slurry of liquids and solids mixed together (as in bourbon), in baijiu it's moistened grain solids that ferment. The only other spirit I can think of that's fermented from a solid is grappa.

Grains are steamed, mixed with qu, covered, and then put into the fermentation pit/pot. Fermentation can a long time. For strong aroma and sauce aroma baijiu, I am not sure what the shortest fermentation time is, but I don't think I heard anyone mention less than a month - and at the 1573 brand's distillery (Luzhou Laojiao) they mentioned it was 3-4 months normally and could be up to six months in the winter.

For 'rice aroma' baijiu, things go much faster - fermentation is only 5-6 days and in modern facilities it is distilled in closer to liquid form in continuous stills. For 'light aroma' baijiu, it can be from 4 days to 4 weeks, depending on the style.

I'll write more about the particular distillery I visited and the production method for strong aroma baijiu in another post, but one quick factoid: At this distillery they bury the moistened grains and qu in earthen pits to let them ferment. The pits are filled to overflowing, piled above the floor level with grains, and  then covered with wet mud which seals it and keeps out oxygen. After the qu does its work, the grains compact a bit and that's how they know fermentation has finished.

You can see in the picture how the pits in the front right are lower than the rest- those are nearing the end of their fermentation. 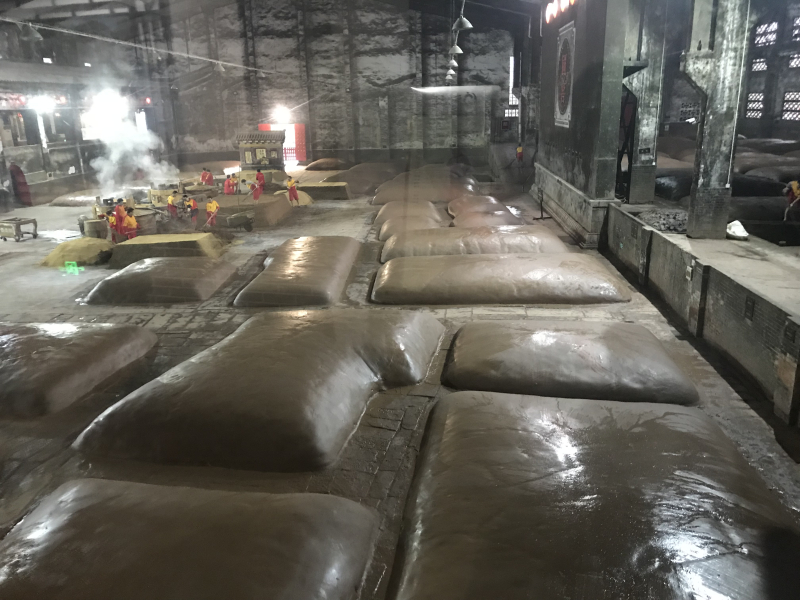 Hi, I'm an italian master degree student currently preparing my final dissertation paper on baijiu production and market. I ended up in this site somehow (maibe because of baijiu itself) and found it really complete, even related to the chinese sources I am currently consulting. A really well done job, please continue to upload more on baijiu!!!

Thank you Ric! I hope to keep studying baijiu as it's so fascinating.

How can we get a look at Ric's dissertation?