Another baijiu post yessss! Today I want to think about how the circular fermentation process in baijiu is like and unlike sour mash in whiskey and muck pits in Jamaican rum.

Recent posts have been:

No need to read them all now.

As described in this post, in strong aroma baijiu, grains are fermented in earthen pits, distilled as solids, and fermented again in the same pits they came out of. A little bit of new grain is added to each fermentation cycle along with the already-distilled grain.

This may sound slightly familiar: in "sour mash" whiskey, some of the post-distillation materials are added to the next fermentation batch.

And in Jamaican rum, some distilleries use "muck pits" that are blends of previous stillage fermenting together. Some amount of this is thrown into new fermentation batches.

So let's talk about how these are alike and how they may be different. 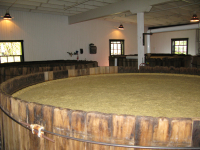 I had always heard that sour mashing was done for "consistency between batches" and thought that "sour mash" is like sourdough, where live fermenting material goes into following batches so they're consistent with each other. This turns out not to be the case.

Instead, some of the stillage (the leftover liquid in the still after distillation) is added to the next fermentation batch. Because the stillage has just been in a still that is literally boiling hot, there is no live yeast to transfer from one batch to the next. The sour mash is just acidifying the fermentation vessel to adjust the pH for a better fermentation and to prevent bacterial infection. The quantity of stillage used could be considered part of a distillery's recipe.

In some Jamaican rums, the stillage (leftovers after distillation) is called dunder, and it is mixed up with other leftovers of the rum production process into something called muck.

From an excellent post on CocktailWonk.com called, "Days of Dunder: Setting the Record Straight on Jamaican Rum’s Mystery Ingredient"

[Muck is] a giant bolus of bacteria that creates a soup of carboxylic acids...  muck is essentially a biological reactor for generating acids that eventually turn into yummy esters. It’s fed refuse from various parts of the rum production process, and its pH level is carefully nurtured via the addition of marl to keep it in humming along or dormant, as necessary.

At the end of fermentation, a portion of muck is tossed in with the fermented molasses and it's distilled together to produce hugely-flavorful rum. Note that unlike in sour mashing, they want to promote bacteria- at least the right bacteria.

So, here again we have leftover products from the distillation being added to the next batch, but the purpose is to get those bacteria-generated acids into the still.

Not only is the muck not just the leftovers of one distillation, some of the core bacteria of it is stored in nerd-famous "muck graves" at some distilleries. CocktailWonk writes in the same blog post:

So what of these stories about outdoor muck pits in the bare ground? ... they do store a semi-solid version of the muck in the ground, as a form of long-term storage for the dormant bacteria. Distilleries commonly start and stop production [and the semi-solid bacteria can be used to restart the muck]. By carefully adjusting the pH of the muck, it can be put into a semi-stable state, where it can be stored in an earthen pit. ... the pit is slightly bigger than the size of a human grave. 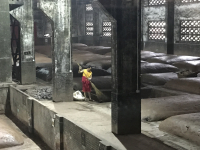 The name for the process of repeat fermentation in baijiu is "1,000-year pit, 10,000-year mash." I was confused by the phrasing: how could the mash (the fermenting material) be older than the pit that the mash is fermented in? But it was explained to me that 10,000 years basically means "forever" or "endless" So we could rephrase "1,000-year pit, 10,000-year mash" as something like "ancient pit, endless mash." It speaks to the endless cycle of always using some of the previous distillation run in the next fermentation.

Like muck, qu  (the fermentation agent for baijiu made up of mold, yeast, and bacteria) contains flavor-creating bacteria that distillers want to impact their beverage. But it's not the only place that bacteria come into contact with the fermenting mash. Because the fermentation takes place in earthen pits and covered with mud, the dirt and mud is a home to bacteria from all the previous batches as well- thus the continuity. Sort of like a muck pit.  But in this case, that bacteria is present throughout the fermentation, and no doubt that's the reason the pits are covered and sealed rather than left open to ferment as with other spirits.

Now, there are other cracks and crannies in distillation where bacteria can live and have multi-batch impacts on the resulting distillates.

Many distilleries are very proud of their wooden fermentation vats, rather than using stainless steel. Like the mud pits and muck pits, bacteria could technically live on between batches of whatever is being fermented. 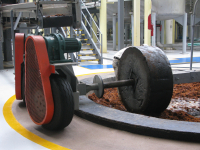 In a recent story for The Daily Beast, Wayne Curtis wondered if the volcanic tahona stones that are sometimes used to crush agave before fermentation might harbor bacteria as well. He writes:

Another factor possibly in play: microbes. Volcanic stones are semi-porous, hard to clean, and can serve as a home to microorganisms, which in theory could make their way into the fermentation process and influence flavors. Camarena doesn’t rule out microbial influence. “I don’t know,” he says. “We’re dealing with microorganisms floating around here, and nothing gets sterilized.”

“Fantasy,” argues Rodriguez. “Here at Patrón, we do an intensive cleaning process from batch to batch. Our yeast and production process are what is responsible for the flavors of Patrón tequila.”

I suppose there could be other pieces of equipment, containers, and tools harboring helpful bacteria in various spirit production around the world.

To what extent each may impact the final flavor of the individual distillate I don't know, but it's fun to compare common practices across categories.