Repetitive and Continuous Fermentation and Distillation in Baijiu

Okay, so far in baijiu we've talked about:

As mentioned in the qu and fermentation post, one unique aspect of baijiu is that it uses qu to saccharify and ferment grains at the same time. Another is that they distilling solids in a still that works like a bamboo steamer, rather than liquids.

(One thing I'll mention in case I forget later: Most baijiu is distilled just one time in a pot still, yet it reaches 70% ABV. This is achieved because the grain solids in the still act like tiny rectification plates as the alcohol passes through the solid mass!)

Now we're going to talk another unique aspect of baijiu: repeat cycles of fermentation and distillation.

The grains to be fermented are first steamed to gelatinize them - to break the cell walls so that they're ready for saccharification (breaking down complex carbs into smaller fermentable sugars) and fermentation by qu. What tool do baijiu distilleries have to use as a steamer? The same steamer-style stills they use for distillation.

Okay this is tough to wrap your head around, but here goes:

If everything were operating in a clear linear path it would look like this:

So after distillation you have your alcohol that you distilled off, with leftover solids in the still that are a combination of grains that had already been fermented/distilled and some that have not yet been fermented. What do you do with those solids? Add more qu and ferment the whole thing again.

This cycle could go on forever, and that's just what happens in the category of strong aroma baijiu. Keep reading. 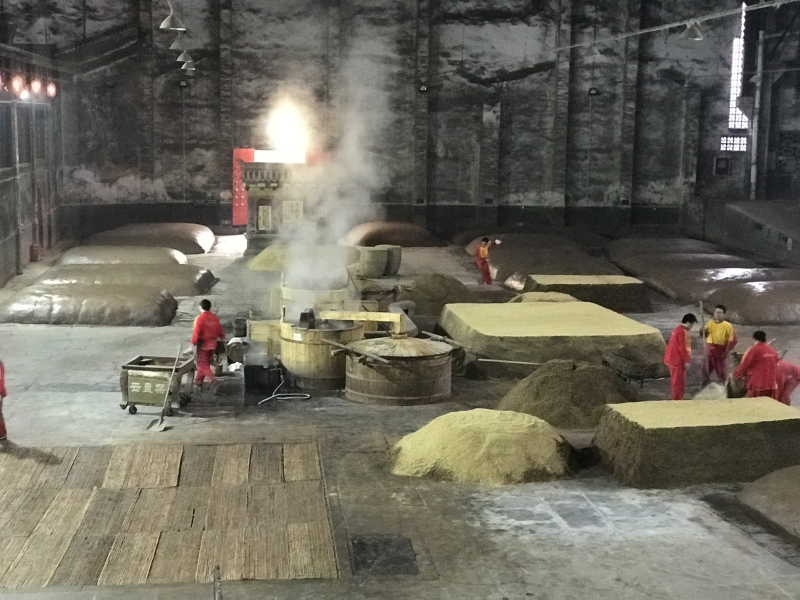 Let's go through the four main styles of baijiu to see how each style approaches this differently (this information is my interpretation of what I've learned from Baijiu: The Essential Guide to Chinese Spirits by Derek Sandhaus):

Rice Aroma Baijiu: Rice is steamed, fermented, and distilled in either pot or now in continuous stills. This is closest to other spirits without the repeat fermentation described above.

Light Aroma Baijiu: There are two types of light aroma baijiu. In the simplest, erguotou, the sorghum grains are steamed, fermented, and distilled just once. For fenjiu, new rice husks are added to the pot still along with fermented sorghum grains. After the first distillation the fermented/distilled grains and new rice husks are fermented again (fresh qu is added) to extract more alcohol from the mash.  Each of the distillation runs are stored (and probably aged) separately.

(note: I don't think rice husks themselves actually ferment or add anything much to the distillation except for volume. Rice husks are used in various parts of baijiu production as filler, sealer, to demarcate layers in fermentation, etc.)

Sauce Aroma Baijiu: We're talking about Moutai here. For sauce aroma baijiu there are 8 cycles of fermentation and distillation, but only a few of the cycles get new grains added.

Sorghum is first steamed,  then fermented in mud-sealed pits for a month. After fermentation, equal parts fermented sorghum and new unfermented sorghum are distilled, and then the solids are refermented. This is then distilled a second time with fresh grains added to the still. From this point on the mash continues to be refermented after distillation with additional qu, but no new grains are added. The same mash is being fermented and distilled over and over. (The Australian website for Moutai describes the process as, "9 distillation sessions, 8 filtration sessions, 7 fermentation sessions and numerous maturation and blending traditions" so I'm not exactly sure how the math works.)

The whole production cycle takes one year to complete- and then the spirit is aged (each distillation run separately) and blended. Compare that to say vodka, which ferments a couple days then can be distilled and bottled and the whole thing done within a week.

Strong Aroma Baijiu: In strong aroma baijiu, there is no production cycle that ends at a certain point, as in the other baijiu categories mentioned above - it is endless. At each distillation, new grains (sorghum alone or a mixture of other grains) is added to the still along with fermented grains. After distillation, the grains are taken out of the still, put back into the fermentation pits with more qu (I believe that they always go back into the same pit they came out of), and refermented. Then it's redistilled with some fresh grains, refermented, and on and on.

In fact, the goal is to have the fermentation pits that have been in continuous use the longest. As the qu contains bacteria along with the yeast and mold, the pit linings and the mud covering the pit builds up these microorganisms, supposedly leading to a fuller, deeper, more complex flavor in the resulting alcohol after aging. (Rum nerds will see the connection to muck pits here.) "Old pits" are a minimum of 30 years in continuous use.

Luzhou Laojiao, the distillery I visited, has a total of 1619 fermentation pits that have been in continuous operation for more than 100 years.

Four of those pits have been in continuous operation since 1573, as in 446 years.

Kind of a big deal. 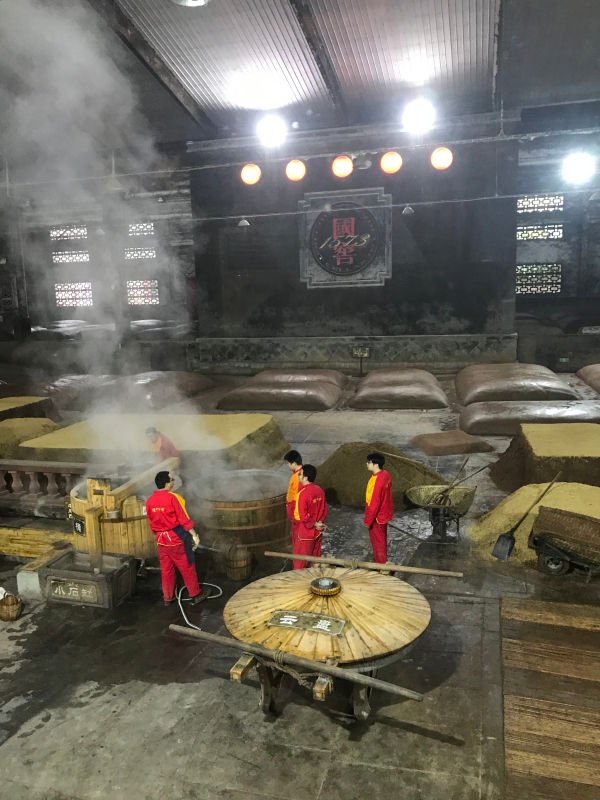 The still is in the foreground with the top off. In the back center we can see four small squarish mud-covered pits. Those are the ones in use since 1573.