Two New Books on Booze and the Law

Two books came out at the end of last year looking at alcohol and the law in the United States in different ways.

While Glass and Gavel covers all alcohol and considerations by the US Supreme Court, Bourbon Justice looks at all sorts of laws and lawsuits as they apply to bourbon specifically and how those shaped America generally.

Below are descriptions from the publishers.

Glass and Gavel: The U.S. Supreme Court and Alcohol by Nancy Maveety 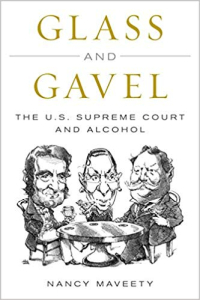 In Glass and Gavel, noted legal expert Nancy Maveety has written the first book devoted to alcohol in the nation’s highest court of law, the United States Supreme Court.

Combining an examination of the justices’ participation in the social use of alcohol across the Court’s history with a survey of the Court’s decisions on alcohol regulation, Maveety illustrates the ways in which the Court has helped to construct the changing culture of alcohol. “Intoxicating liquor” is one of the few things so plainly material to explicitly merit mention, not once, but twice, in the amendments to the U.S. Constitution. Maveety shows how much of our constitutional law—Supreme Court rulings on the powers of government and the rights of individuals—has been shaped by our American love/hate relationship with the bottle and the barroom.

From the tavern as a judicial meeting space, to the bootlegger as both pariah and patriot, to the individual freedom issue of the sobriety checkpoint—there is the Supreme Court, adjudicating but also partaking in the temper(ance) of the times. In an entertaining and accessible style, Maveety shows that what the justices say and do with respect to alcohol provides important lessons about their times, our times, and our “constitutional cocktail” of limited governmental power and individual rights. 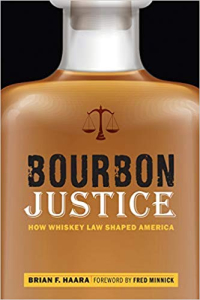 Bourbon whiskey has made a surprising contribution to American legal history. Tracking the history of bourbon and bourbon law illuminates the development of the United States as a nation, from conquering the wild frontier to rugged individualism to fostering the entrepreneurial spirit to solidifying itself as a nation of laws. Bourbon is responsible for the growth and maturation of many substantive areas of the law, such as trademark, breach of contract, fraud, governmental regulation and taxation, and consumer protection. In Bourbon Justice Brian Haara delves into the legal history behind one of America’s most treasured spirits to uncover a past fraught with lawsuits whose outcome, surprisingly perhaps, helped define a nation.

Approaching the history of bourbon from a legal standpoint, Haara tells the history of America through the development of commercial laws that guided our nation from an often reckless laissez-faire mentality, through the growing pains of industrialization, and past the overcorrection of Prohibition. More than just true bourbon history, this is part of the American story.