A Visit to the Bently Heritage Estate Distillery

America has been opening some truly impressive distilleries and distillery tasting rooms as of late, mostly in Louisville. Since the last time I visited only about four years ago, Michter's just opened a new distillery a week ago, Rabbit Hole distillery looks modern and impressive, and Angel's Envy,  the Evan Williams Experience, whatever Bulleit is doing at Stitzel-Weller, Kentucky Peerless, and Old Forester  have opened their visitors' centers.

But probably the most exciting new distillery in America to open just popped in Minden, Nevada. The area is a high desert environment, a plateau surrounded by mountains on all sides, about 45 minutes south of Reno.

The scale of Bently Heritage Estate Distillery, which opens to the public Saturday, February 9, 2019, is going to blow your mind. Keep reading. 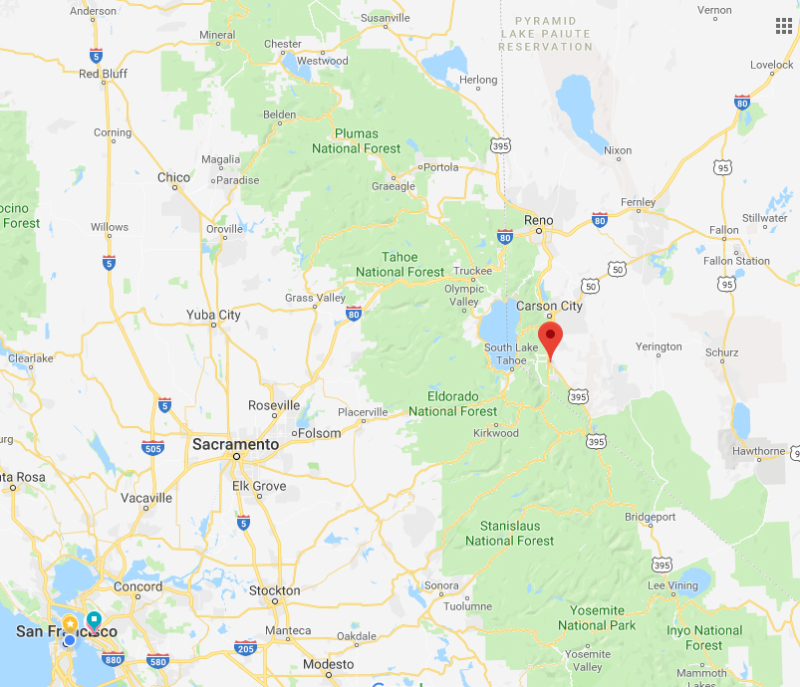 This is a ranch and an estate distillery, so nearly everything in their bottles is grown on the property (minus botanicals for the gin... so far). That includes barley, oats, wheat, rye, and corn for their base spirits. They also raise cattle and have a butcher shop on the property, and grow other crops including hops and alfalfa.

But let's talk about the stills, because: 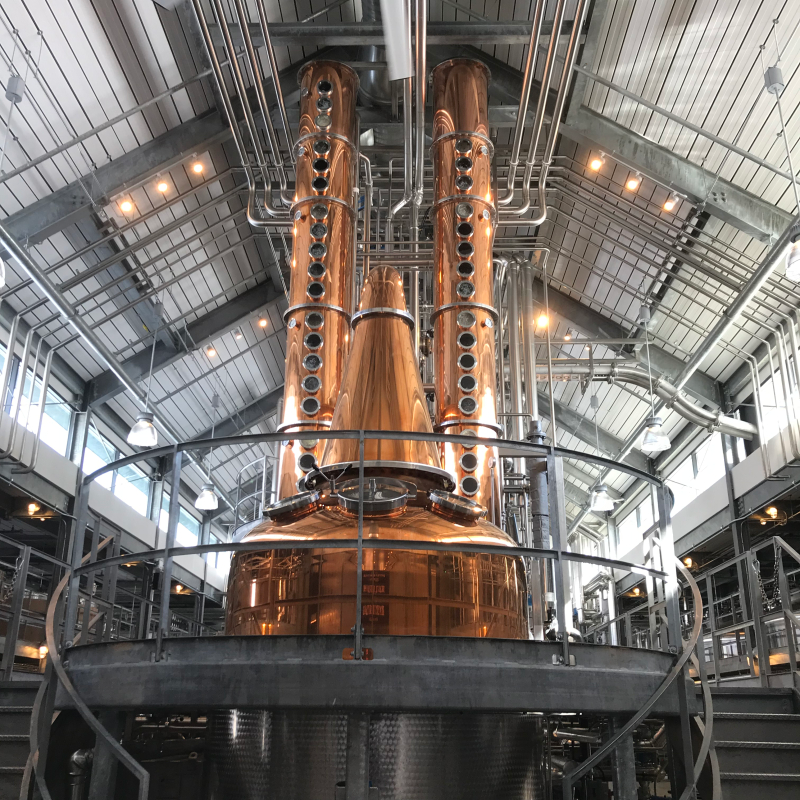 Yeah. So there are actually two separate distilleries on the property. This one that looks like the Holy Mother Church of the Order of Saint Juniper; and the other one with where you can sit on a couch and watch American single malt whiskey being made in traditional scotch whisky stills.

The cathedral-like space is a former creamery dating to 1906. From the outside, it doesn't look like much. 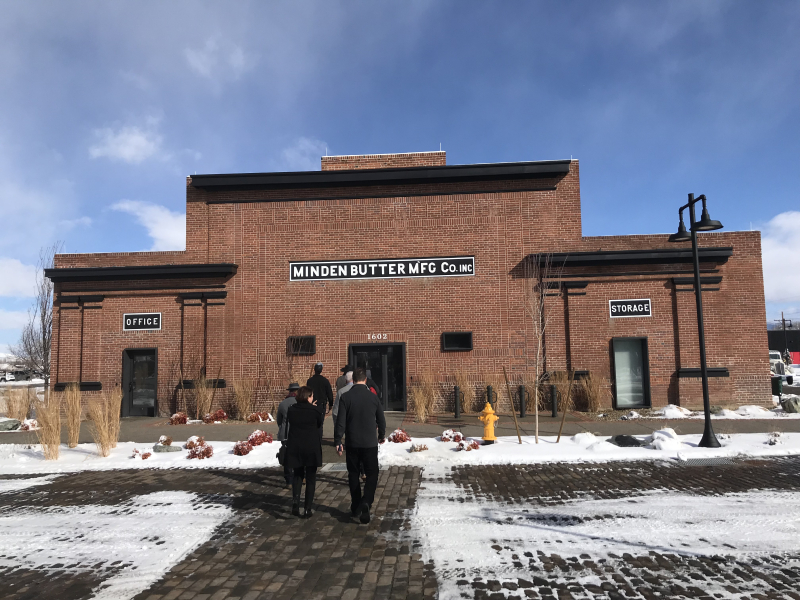 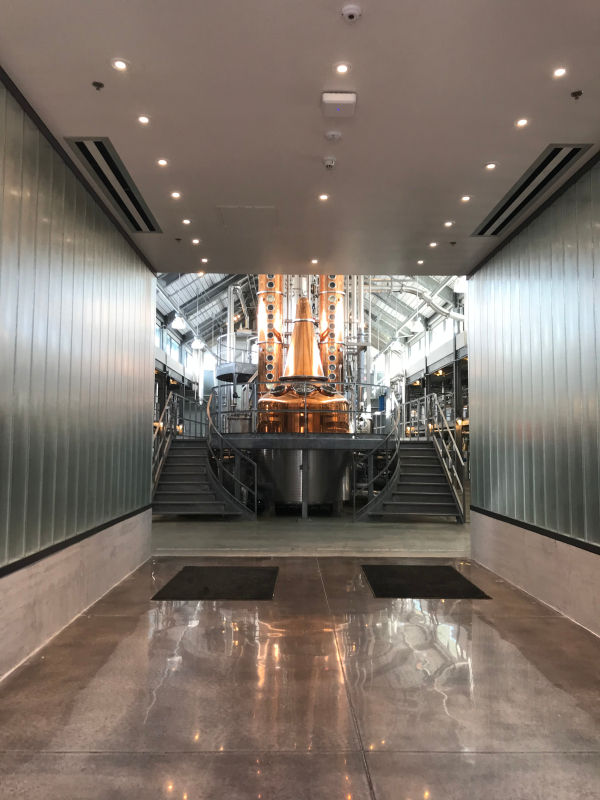 Inside, you enter facing this gargantuan pot still with two columns behind it. This is a discontinuous pot-column hybrid system that works together. In this still they make gin, vodka, and forthcoming liqueurs. The two columns are more like a single column cut in half - after the liquid moves through one still it's pumped to the top of the other one to continue its journey. 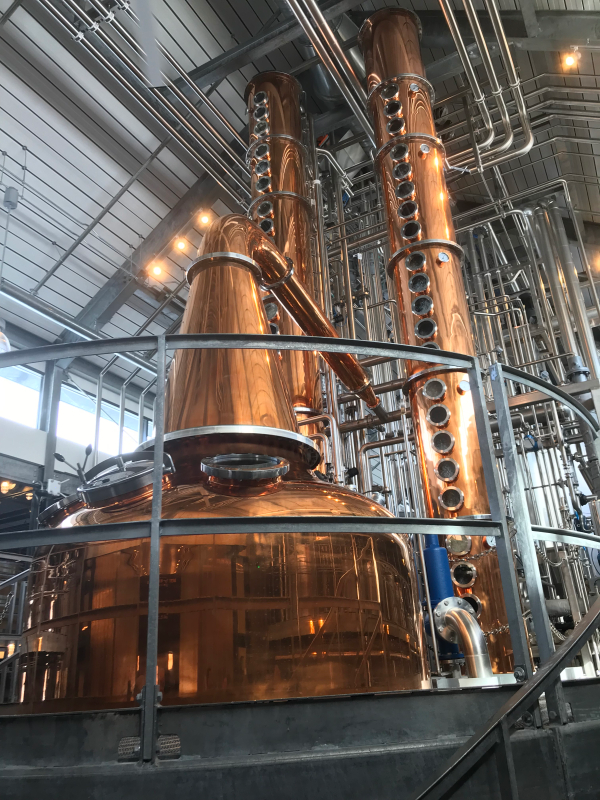 Behind this still is a stainless steel continuous column still. I believe they said that for anything that will go into the pot still they first strip the solids and give it a first distillation in the column.

The column still is narrow and has so many pipes and parts connecting to it that it's not really recognizable as a still. It's called a Headframe still. It has a capacity of 5000 gallons per day. 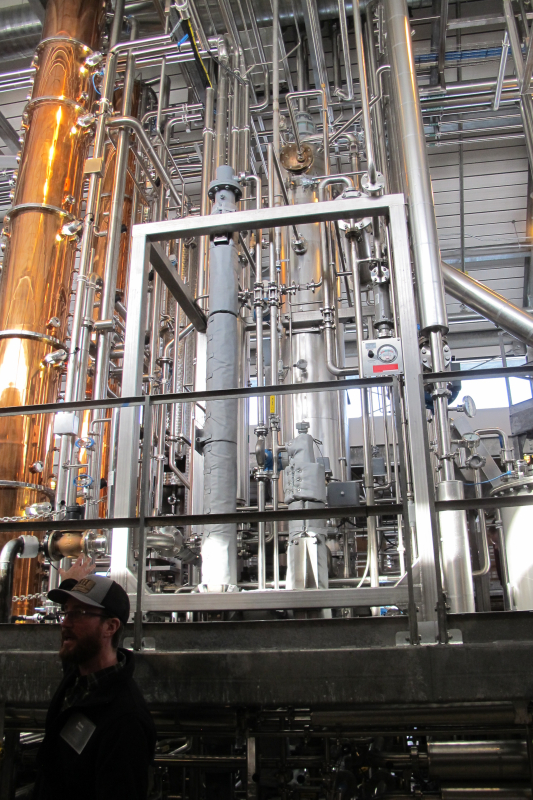 Behind the column still is a grain cooker. Grains are pumped in from the ceiling and cooked for 3-4 hours. In the case of their oat spirit that is the base of the vodka and gin, they use "a ton" of enzymes so that the oats don't gunk up the cooker.

Behind the cooker at the far end of the same cathedral room is their experimental still, which is the size of a standard start-up distillery still. It's a pot with rectifying column. 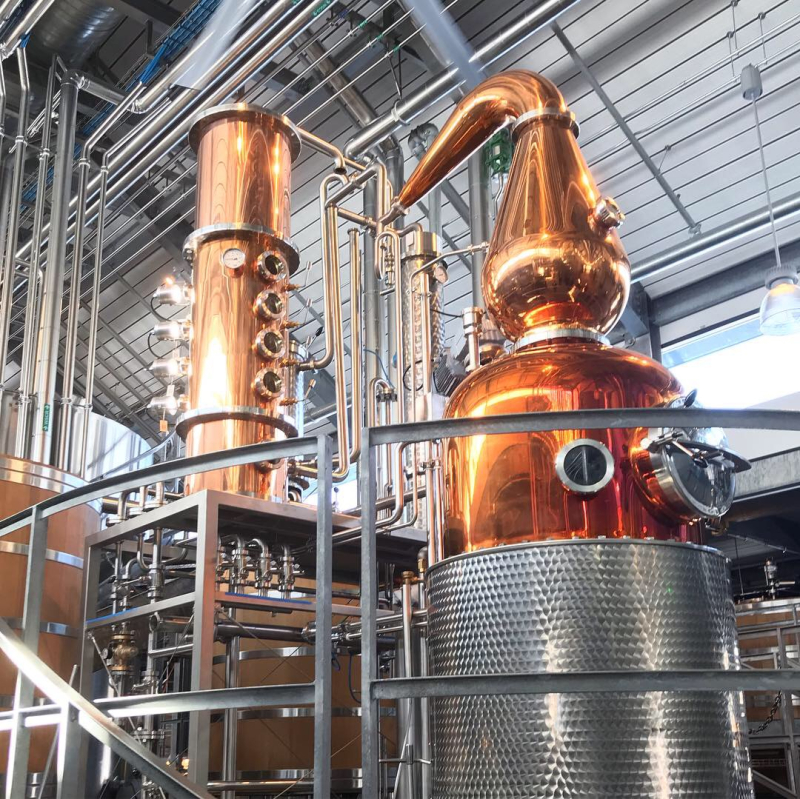 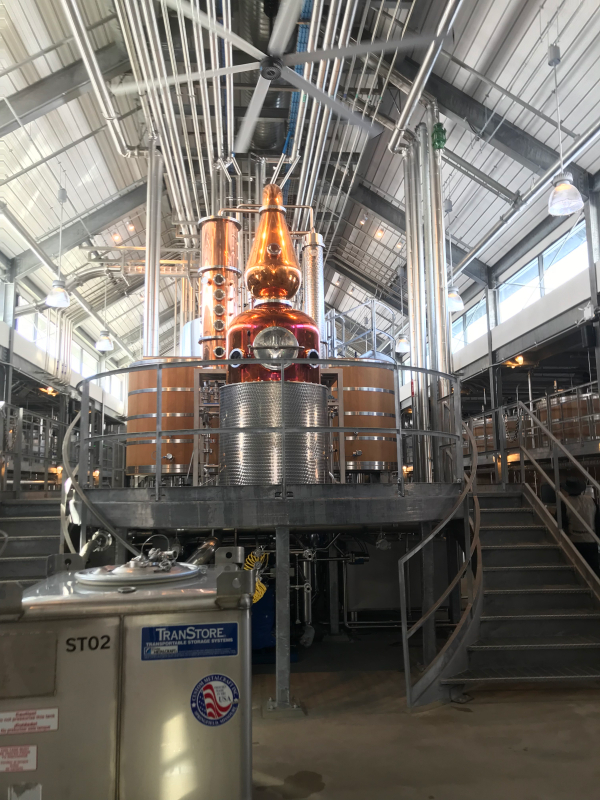 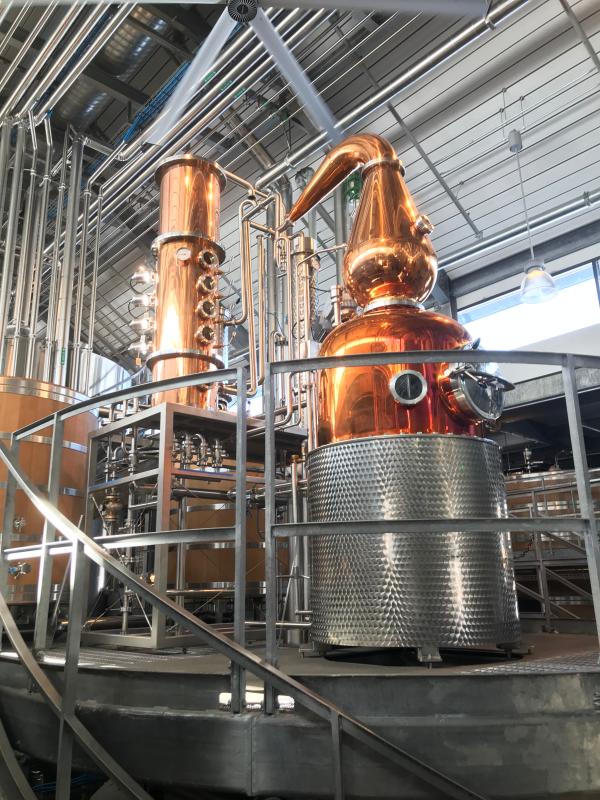 On the sides of the cathedral room are fermentation and storage vats and tanks to hold liquids in the various states of production.

Beyond this room the building continues into a barrel filling room and a bottling line. 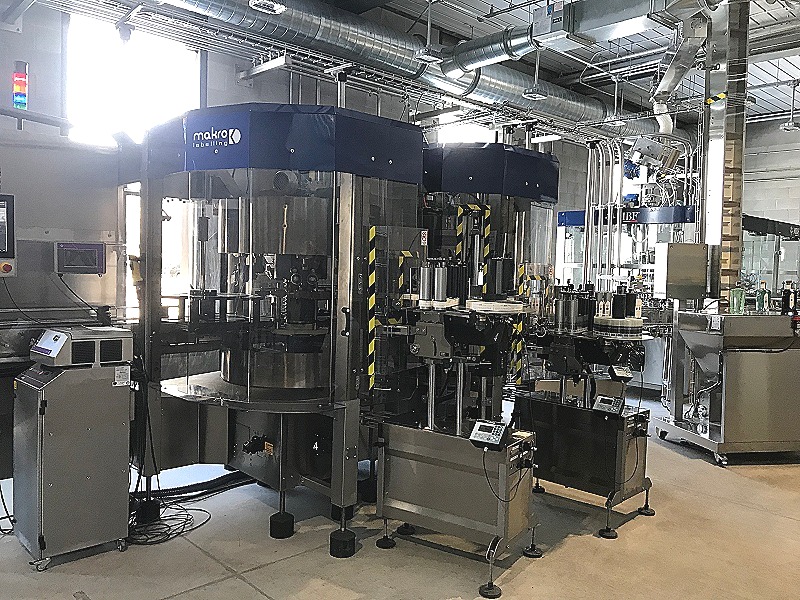 The rickhouses are a mile or so from the other site. We didn't get a chance to peek inside them (I think they are being developed for visitors as well so that certain groups can get barrel tasting experiences there in the future), but they have three separate temperature and humidity controlled areas (so they can imitate the weather changes of Kentucky and Scotland at the same time), plus an experimental climate control area that I assume is smaller.

About the only thing they don't have onsite is a cooperage.

The main visitor's center is the former feedmill with grain silos that date to 1906 as well. The room that makes up the main visitors center apparently held a huge vat of molasses which was used to enrich the grain to make feed. That's used as the design inspiration for the central three-story spiral staircase. There will be a retail shop on the ground floor, a bar on the second floor, and I believe the third floor will be used for special events like mixology lessons. (On my visit, Tony Abou-Ganim was there teaching the press how to make cocktails.) 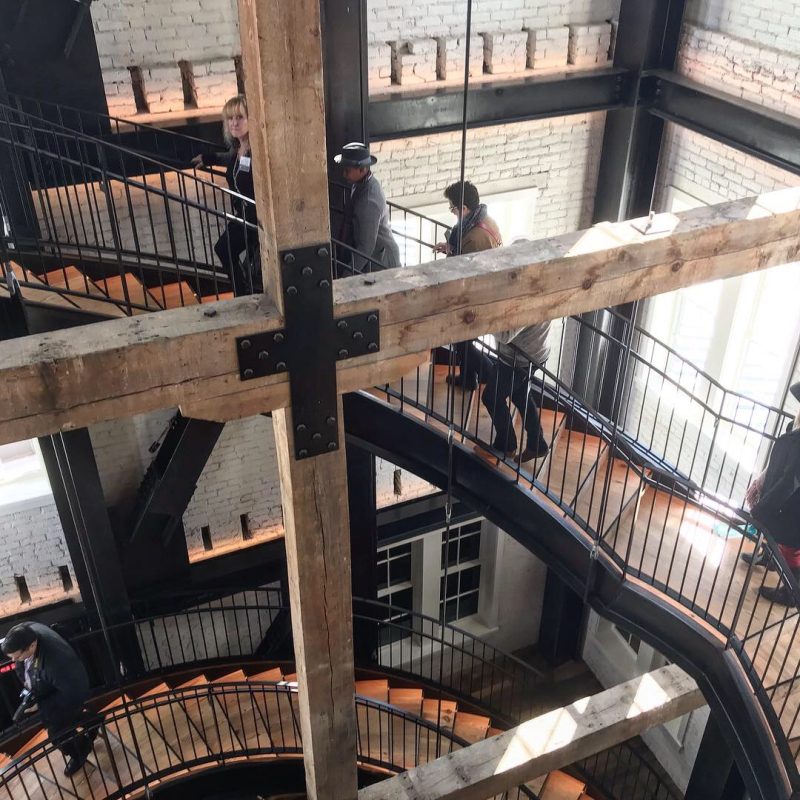 All three floors of this building have a glass wall that looks into the adjacent concrete silos. The two buildings were joined and the interior of the silos were carved out to make a clover shape. [For an amazing example of this type of architecture, check out the mind-melting pictures of the Zeitz Museum in South Africa.] 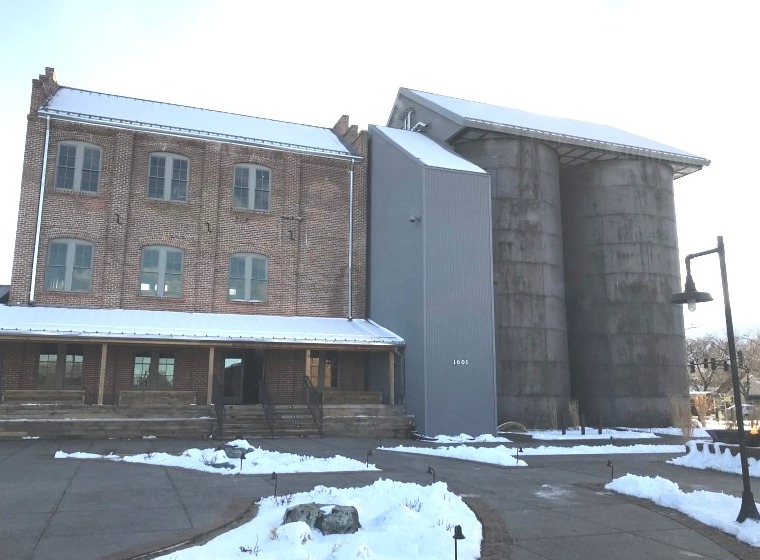 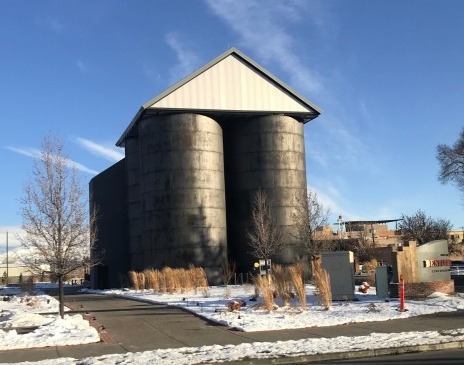 Inside the former grain silos are two enormous Forsyth stills for making American single malt whisky. There is also a mash tun and fermentation vat in the room so that all the distillation production is self-contained - except for the malting, which we'll see in a second.

The lyne arm of the still is at quite an angle so in single malt scotch they would tell us that this makes for a meaty, oily style of whisky. Here the distillers said they can make that style of make adjustments so that it comes out in a lighter style if they so wish it. 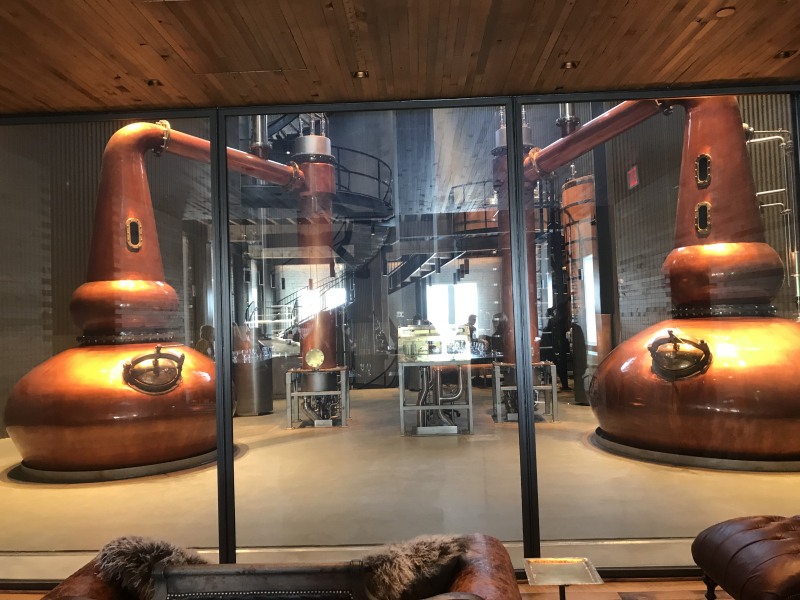 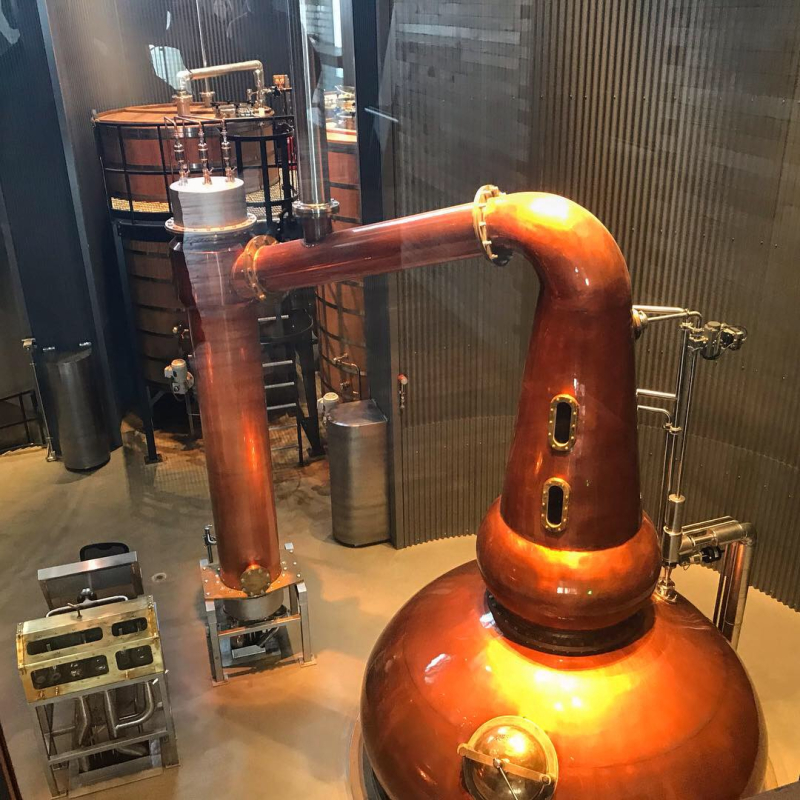 The Ranch and the Malt

Elsewhere on the ranch they raise cattle and have a retail butcher shop (they're getting into cheese soon as well). The ranch also has the largest compost facility in Nevada, which they use for their spent grains from distilling. This all gets composted and is used as fertilizer in the fields on site.

For spirit production, they're growing heirloom corn varieties, oats, rye, and barley. The distillers make request from the farm managers and they attempt to grow different grain varieties to try in their distillation experiments.

As the Bently Heritage ranch has been operational for about 4.5 years preparing for the distillery to officially open, they have a lot of grains stored up for future spirits. (I think they said they were still distilling 2016 grains for their current products; they've got a lot of backlog.) They have 5 cultivars of barley and I think they've tried a lot of different types of corn.

They have 60,000 acres under cultivation. Even when no grains are currently growing, there's some stuff to look at. 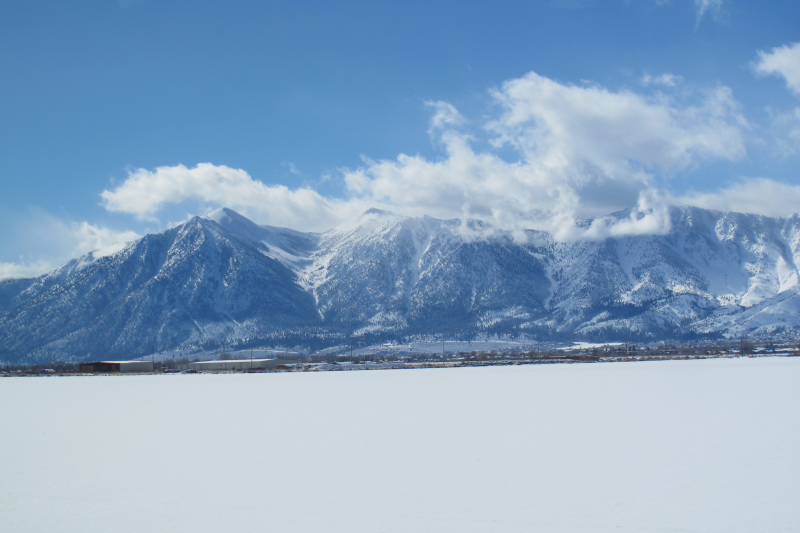 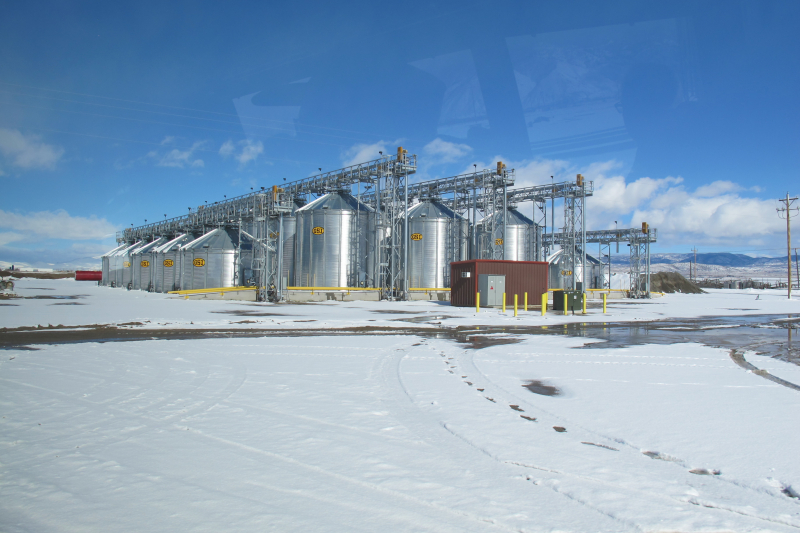 With the scale of this production, it may not surprise you to find that they also malt their own grains. The malt house main room is full of grain storage and big tanks, which are self-contained "auto-malter" makers. Inside, the grains are soaked, dried (kilned), and come out as malted barley.

They also have a separate floor malting room, where wet grains are spread over a concrete floor, turned by hand for a few days, and then dried. (They'll be able to smoke the floor malted barley in the future, as is done in Islay scotch.) They'll be able to process 10 tons of malt per week (!!) here. They'll not use it all for themselves, but will sell some to beer producers. 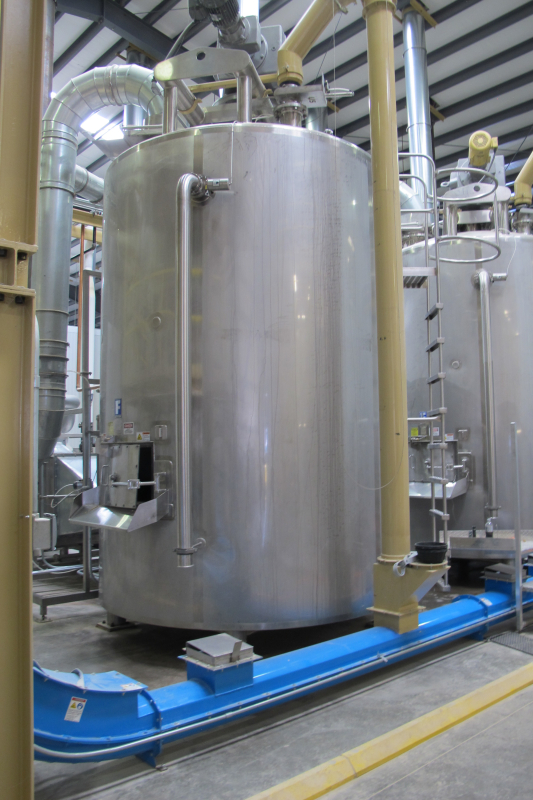 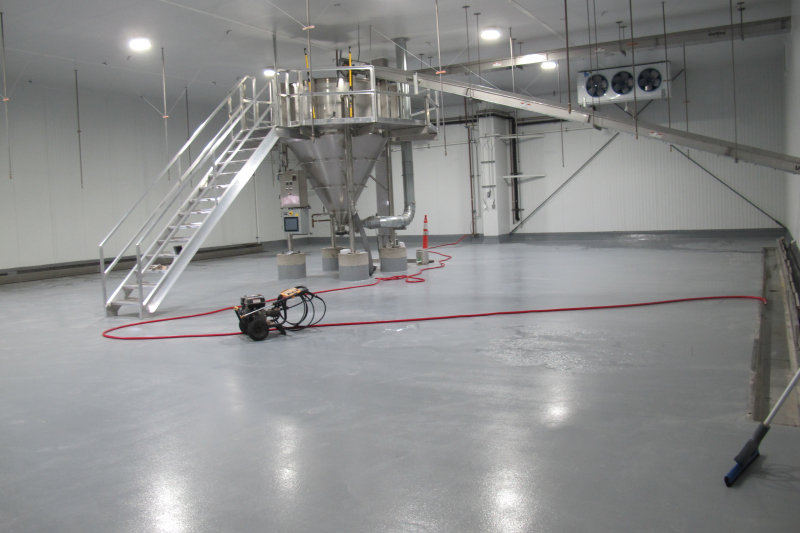 They build a greenhouse that hasn't been planted yet (expect citrus trees and other botanicals probably to be used in future gin) and have a hop growing area next to it. 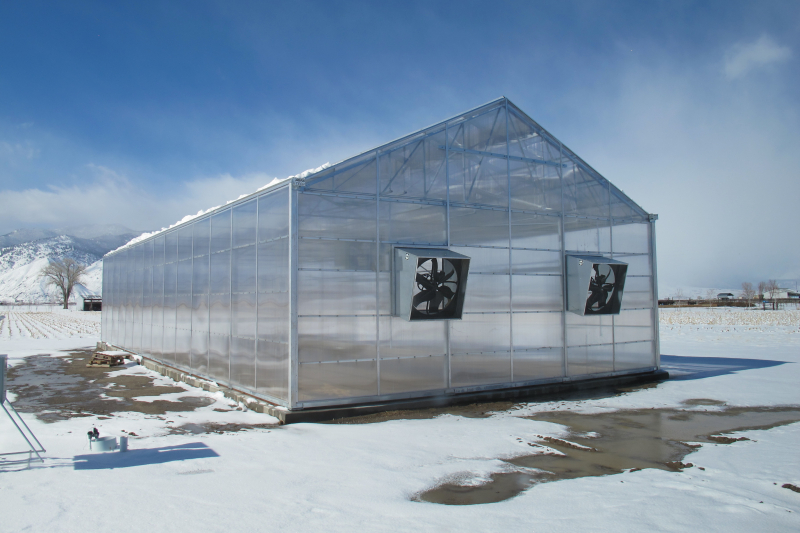 Beyond all this, they have a seed bank - apparently some of their heirloom varietals of grains can be hard to source from one year to the next so they propagate and store seeds.

The farm is all-natural and no-GMO, but is not certified organic (and I don't think they plan to be).

Obviously Bently Estate plans to make whiskey, and lots of it. But for now, the distillery is opening with three products: A vodka, a flavored vodka, and a gin.

Source One Vodka is distilled from estate grown oats, and it has a nice soft texture. They also produce a vodka rested in small oloroso sherry barrels.

Juniper Grove Gin is their London dry-style gin that's juniper forward with traditional gin botanicals except for the use of lime rather than other citrus.

Two more gins are forthcoming: Atrium, which will be closer to a New Western style of gin; and Alpine, which includes pinecones and will reflect the botanicals of the region. 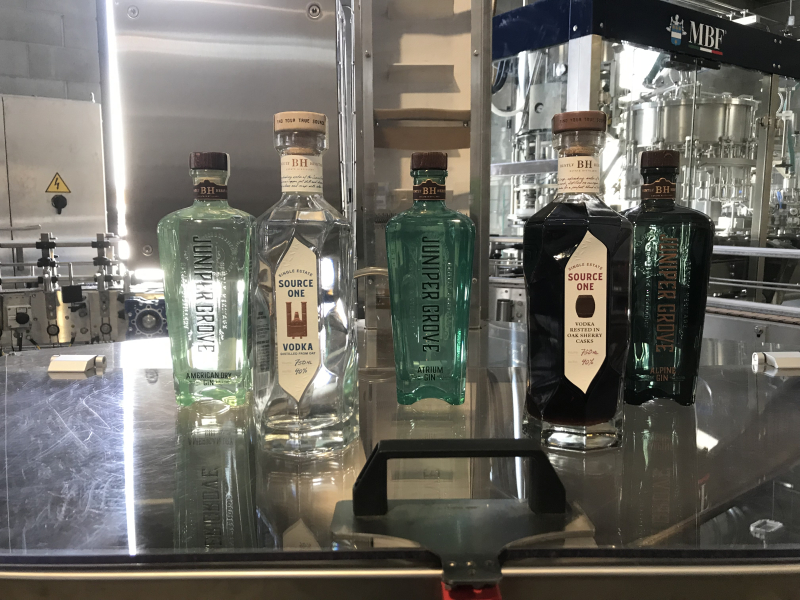 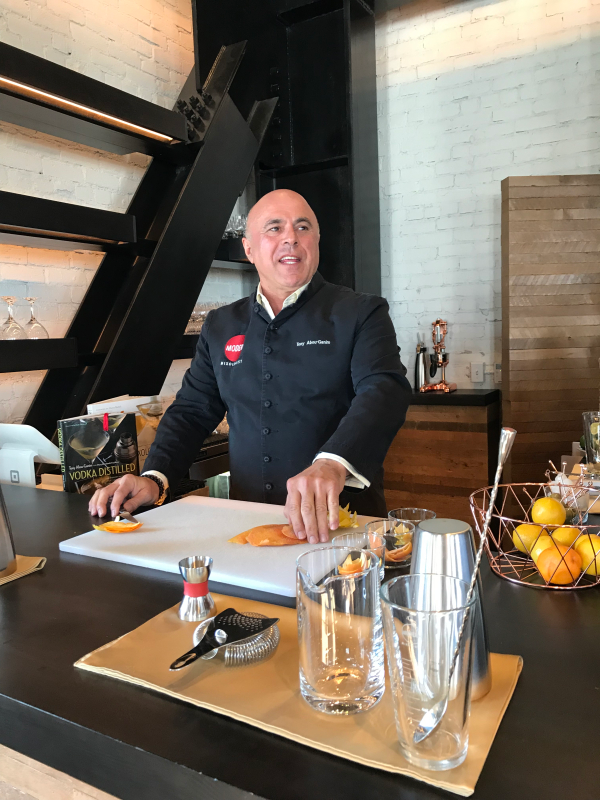 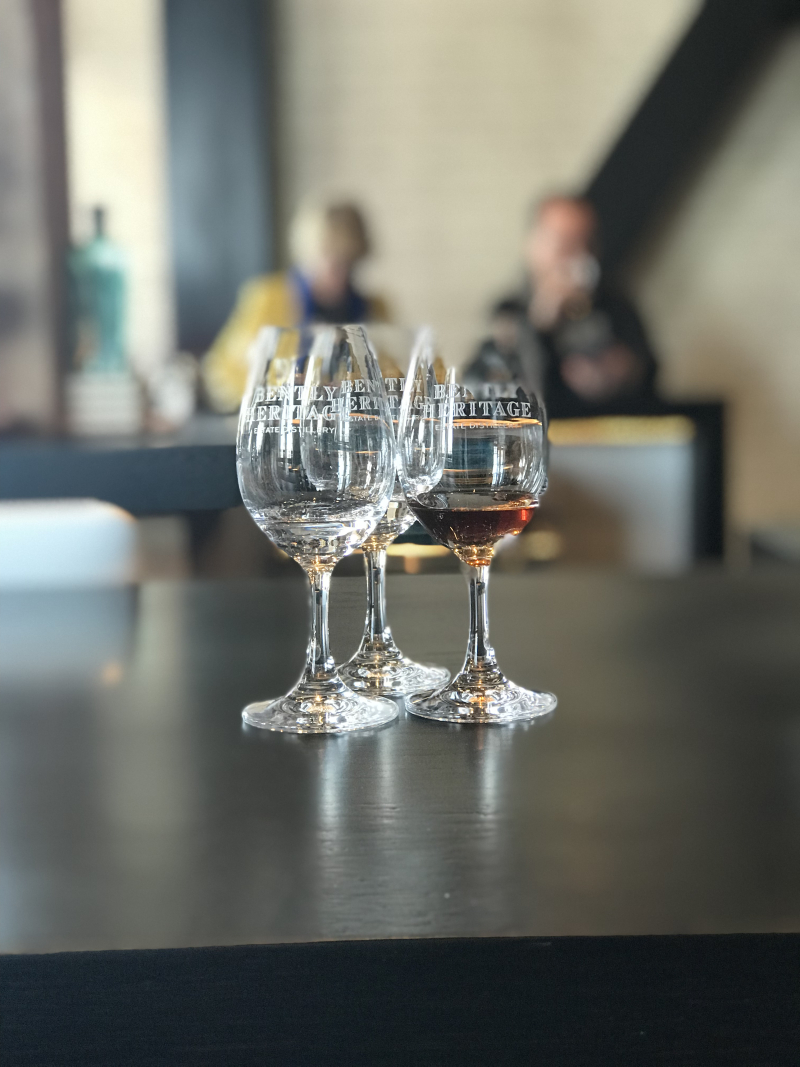 What the Hell is Happening Here?

Obviously this is an operation on a scale that is just not seen. Distilleries typically start small and/or focus on one spirit product. This one is starting huge and will be making tons of different spirits - anything that can be grown on the estate. (Which means no rum and maybe no vermouth.) So this one company will have in a few short years an entire portfolio of products, all self-grown and self-made in one location.

I'm very impressed and will continue to watch.

10 tons of malt a week isn't a crazy amount, depending on their yield it's enough for perhaps 1700 53 gal barrels of whiskey a year which would make them larger than Westland or Westward who make 1000+ but still smaller than just about every malt distillery in Scotland barring Edradour.

Thanks, guess it just sounded like a lot. Also I'm not positive that isn't just from the floor malting alone; my notes aren't clear on that.