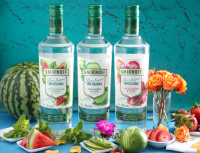 My question is:
Does alcohol kill off or disable the nutrients of infused herbs/spices/fruits - when a base alcohol is used and ingredients are added afterward - such as bottling to infuse - no more distillation or heating, just simple infusion, then straining and re-bottling..? Will the integrity of the nutrients last or diminish..
Thanks in advance...

@Cath - Well there are two issues: The first is whether there can be a net positive from botanical nutrients when we're drinking alcohol generally. Many companies market 'healthy' alcohol and I disagree with framing booze as healthy in general.

But to your question (and I am not a chemist or nutritionist) - I think it depends on the nutrients in question. For example, I think the essential oils would be okay since essential oils are often extracted/preserved in alcohol generally. Minerals would be fine. Some things will oxidize- either right away (like mint) or over time and render those things ineffective. The alcohol will help kill living critters like bacteria, while preserving organic matter.

So my very non-specific and non-scientific answer overall is that alcohol should preserve some but not all of the organic nutrients from matter infused into it. But at the end of the day they're preserved in alcohol and nobody should try to drink their way into health.

Thank Kindly - I appreciate your respone and agree totally with your opinion :)

Am a Chef - just toying with a few cooking ideas..