Well, I have thoughts. A few of which were used in this article, "Is Molecular Whiskey the Futuristic Booze We've Been Waiting For?" by Billy Lyons on Fortune.com. 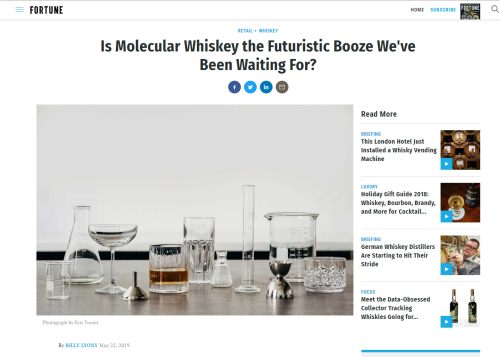 I judged (blind) Glyph at the SF World Spirits Competition. It was in the "Other Miscellaneous Spirits" category because it is not whiskey, and I remember thinking it tasted like vodka with spices, and since it appears to be made from grain neutral alcohol with added flavors that seems like a pretty accurate description. I thought it was interesting but would not have identified at as whiskey.

Another quote from me that didn't make it into the final piece:

I don’t think Glyph is not going to impact the whiskey industry with its current flavor profile and price point. It’s more expensive than cheap whiskey so it’s not a low-price substitute for bourbon, and it doesn’t have a flavor profile that would make a whiskey drinker switch to it. Could it be a step on a path that converts a vodka drinker to a whiskey drinker? Possibly. But I think people will consider real whiskey to be a step up from products like this, like going from knock-off Gucci bag to a real one.

The writer also asked about Glyph as a "sustainable" alternative to regular whiskey. I think that we could call Glyph a lower-impact product since it's not aged in barrels requiring the wood and space to house them, but trees are a renewable resource so I wouldn't go so far to say it's very sustainable.